Back in 2017, sci-fi and martial arts movie games were simultaneously changed and elevated with the release of “Beyond Skyline”. The sequel to 2010’s “Skyline”, “Beyond Skyline” took place in the midst of the same extraterrestrial attack, but brought in new characters, a new setting, and a nice helping of Silat for an alien invasion movie experience that had simply never been seen before.

Now, director Liam O’Donnell is back at it with the third chapter in the series, “Skylines” (aka “Skylin3s”) bringing back the same elements that made its predecessor so unique while also continuing with its sci-fi-martial arts innovation.

Fifteen years after Earth was first attacked, mankind has largely repelled the invading alien forces, with the humans who’d been forcibly transmuted into alien soldiers learning to reacclimate to their lives within their bodies.

However, that adapted peace now hangs in the balance with the unexpected rise of a virus that threatens to revert them back into their alien selves, leaving the world facing a new potential wave of extraterrestrial enemies right on their home turf. 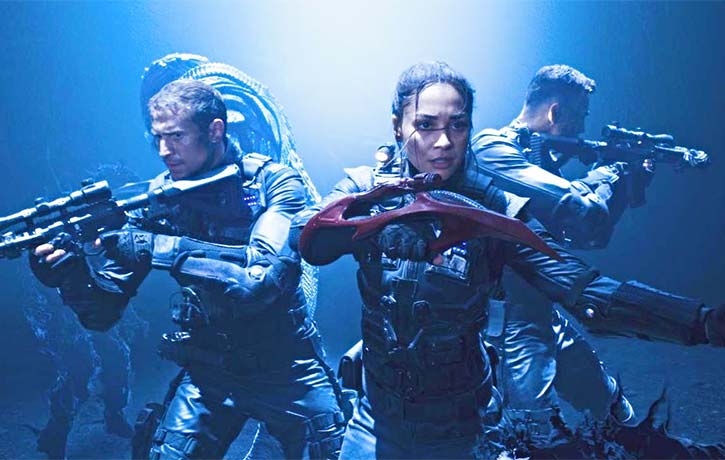 Lindsey Morgan as Rose leads the mission to the alien world

Lindsey Morgan as Capt. Rose Corley is Both Human & Alien

Captain Rose Corley, the adoptive daughter of the disappeared Detective Mark Corley and herself a merging of both human and alien DNA, is recruited to lead a team to the alien’s home world of Colbat 1 to reach the weapon that can stop the spread of the virus.

Rose still bears the guilt of a miscalculation in a past battle that cost the lives of some of her fellow soldiers, but with just 12 hours to complete the mission, she agrees, with the team heading off to Cobalt 1 as a collection of humans back in London does its best to hold the erupting alien outbreak at bay.

Captain Rose signs up for her mission

Rose comes face to tentacle with an alien warrior

If 2010’s “Skyline” and it’s belated 2017 follow-up “Beyond Skyline” were following the global-scale alien invasion template of “Independence Day”, “Skylines” is more in the vein of the space marine angle of “Aliens”.

In a series where leading duties constantly change hands from one film to the next, Lindsey Morgan is a great new protagonist as Rose, bringing Linda Hamilton levels of energy as a scarred survivor facing a literally inhuman enemy.

The Power Claw is back

Lindsey Morgan as Captain Rose Corley in an emotional bind

Though the “Skyline” series has a tradition of jumping from one set of characters to another in each film, Morgan’s Rose really feels built to be the heart of the series even if it is three movies in. If “Skyline 4” happens, the return of Frank Grillo as Mark and Iko Uwais as Sua would certainly be ones to roll out the red carpet for, but with the strength of Morgan’s performance, Rose being in the cockpit of the ship once more is a must.

“Skylines” might also be the most unexpectedly topical movie of 2020 with the angle of a cataclysmic virus being unleashed upon the world. It’s frankly hard not to get pulled out of the movie just a bit with each mention of the virus.

Yayan Ruhian well known as Mad Dog is back

Fortunately, “Skylines” easily keeps viewers entranced with visual effects and set designs are leaps and bounds beyond its relatively modest budget. Director Liam O’Donnell really knows how to get the most bang for his buck out of what the film’s sets, locations, and visual effects resources will allow. And while the Angkor Wat-like temple setting of the finale of “Beyond Skyline” is a little missed this time around, the alien world, ships, and encampments of humans adapting to the planet after the first invasion do their job at servicing the movie’s dual themes of survival and war.

The “Skyline” series also transitioned into a one-of-a-kind sci-fi franchise in bringing martial arts into an alien invasion. “Skylines” rises to the level of its predecessor with outstanding action scenes, with Rose even holding her own against the alien-ized ‘Trent’ from “Beyond Skyline” less than ten minutes in.

There’s plenty of gun play and sword slashing once the mission arrives at Colbalt 1, but for martial arts fans, Daniel Bernhardt and Cha-Lee Yoon steal the show going head-to-head in a lab.

The human vs human element is just as essential to the “Skyline” series as that of humans standing their ground against aliens. And hopefully, “Skylines” will also shine a little light on the growing German action film industry by way of Cha-Lee Yoon, previously seen in superb, action-packed albeit low budget mini-opuses from Germany like “One Million K(l)icks” and “Plan B”.

15 years after the invasion Earth is very different

The Return of the ‘Power Claw’

The show-stopping bladed gauntlet from “Beyond Skyline” known as the “Power Claw” is also back as Rose’s weapon of choice in battle against the aliens.

Though Sua jackhammering an alien’s skull with it in the last movie is still the weapon’s biggest money shot, it still feels like the series’ calling card is back in action once more with Rose wielding it like the warrior she proves to be.

With all that said, “Skylines” still has one big surprise up its sleeve that is guaranteed to bring fans of “Beyond Skyline” to their feet cheering. Not to spoil it for you, let’s just say that Rose isn’t the only one wielding a claw of power in “Skylines”.

The “Skyline” series is as gripping and exhilarating as ever with its third chapter in “Skylines” (or “Skylin3s”). Trading the ground-level human survival story of the first two films for one of warriors taking the fight to their invading enemies among the stars, “Skylines” is an interstellar, action-packed blast with the series’ best lead character yet, glowingly realized otherworldly environments, impressive visual effects, and plenty of the martial arts action that is now a staple of the franchise.

With VOD options a-plenty this holiday season, the latest chapter in what is among the more promising, ongoing alien invasion series is a recommendation not to be overlooked!

FIGHTS BETWEEN HUMANS, HYBRIDS & ALIENS COLLIDE in the FUniverse with these movie reviews, interviews, including our deep-dive with “Beyond Skyline” director, Liam O’Donnell, Top 10’s, Top 5’s, broaden your TRAINING SKYLINES in Official KFK gear and subscribe for a host of martial-arts action that’s out of this world on YouTube!

The MMA Kung-Fusion: Rise of the Chinese Fighters

The Sherlock Holmes School of Self-Defence