Mark Dacascos A bladed duel Only The Strong

Mark on his training influences

I love to train in martial arts!  I was a Hawaiian boy spending most of my teen years in Hamburg Germany, and my sanctuary was in the kung-fu school!  I was a foreigner, and although I had a lot of good friends, kung fu and Jackie Chan were a huge influence in my life! He was a huge influence and I think Jackie Chan was the one that inspired me to really get into gymnastics, and do flips and all that.  I attribute almost breaking my back to a Jackie Chan film haha!  In one of the movies I saw him do, he ran up something an did a back flip and I thought, “Oh that looks so cool! He does it so well!” He made it look like it wasn’t that hard, so I went back to our kung-fu school where the ceilings were about 9 and a half to 10 feet high and there was this beam in the middle of the gym and I thought, I’m going to run right-up the beam and do a backflip, (because I can do a backflip) so running up the beam will be even easier. So I ran all the way up to the top and my head hit the ceiling, so before I even did the flip I was falling backwards and…bam!  I hit my back!  So I realized it was not as easy as it looked.  However a couple of months later I tried it again and made it -was aware of the ceiling!  But, Jackie Chan…he was just huge for me!  Bruce Lee and Jackie Chan!

When I take a class I’d like to salute in and start off slowly with some warm up exercises, just to get the body relaxed, getting ready for  the jumps and kicks and so forth. When I was a teenager I grew up in Hamburg, Germany.  It got very cold in the winter time.  I would walk to my dad’s class sometimes.  He would salute us in and say OK let’s fight.  I would be thinking, “wait a minute, my body is like cold, I might tear something or whatever!”.  But his reasoning was that in a fight situation, in a street fighting altercation, self defence, you don’t have time to say ‘wait a second’ you don’t have time to say ‘I got to warm up my arms and legs, I got to stretch out’ you just got to go”  So he believed, as I now do, that if you want your body to react and to be able to perform the way that you want it to, you’ve got to train it that way all the time. Like picking up a glass of water, you don’t stretch before you do that.  So if you want to be able to kick high or do a sweep or punch you have to be able to do that when you’re cold.  You know what I’m saying? So that’s what we did.

A lot of times we would have training sessions where we came in our street clothes.  I think in most gyms, in gymnasiums or classes you come in with very loose fitting clothing and athletic shoes and we would come in sometimes with suit and tie and dress shoes on just to see how different it would feel fighting in different clothing.  Or environment training.  He would take us outside and we would train in the snow.  Or having a sparring match on the slant of a hill or on  pavement or sand.  Just to know, to come as close to reality as possible.  We would set up a bar situation bring in actual tables and chairs into our training area with ashtrays and glasses and of course we would be careful as careful as possible but we would simulate actual situations in your life.  I think as a martial artist if you want to learn how to work with reality you have to train like that.  We would try to avoid the eye  gouges and so forth, but as far as making contact and hitting and with the speed we did as much as we could without hurting each other.

Mark Dacascos Mark on Dancing with the Stars 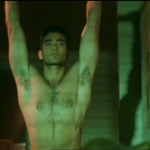 Mark Dacascos From the movie Sanctuary

Mark Dacascos Choreographing behind the scenes in prep for Drive

“The first time I actually saw Sammo it was in Enter the Dragon, and back then I thought, “that’s a big man who moves like a little man!”.  That’s pretty awesome and I’ve been a fan of his since then.  Since 1973 when I saw the movie.  I am happy to say that I got my ass kicked by Sammo Hung, right on!  I did an episode of Martial Law, I play the bad guy.  In the first fight scene I win and in the second fight scene he destroys me. Happily so!  He’s a great guy and I’ll tell you what, man! he’s as big as he looks.  He’s fast, he’s strong, he’s precise and he’s funny!”

“Jackie Chan he was huge for me.  Bruce Lee and Jackie Chan.  Even now when I’m on my tread mill over there trying to keep my cardio up I pop on a Jackie Chan film or a Bruce Lee film and those guys keep me motivated.  I like Snake in The Eagle’s Shadow.  That was the first one I saw of Jackie Chan’s and it’s so vivid in my mind still.  For Bruce Lee, oh boy, I guess I would have to say its Enter the Dragon.  I love that opening sequence with Sammo Hung and I love the sequence with Bob Wall.”

Mark on dancing and self-expression

“Dancing is similar to martial arts, because it comes from the soul. It’s dialogue “physicalized,” just like the fight scene in a movie. I really, really enjoyed it, but what I learned is that you have to connect it. One of the great things Jiang Hao Chiang once said was, “Movement without spirit is nothing.” What I learned is that when I did a movement with Lacey Schwimmer that while we were technically correct we were not connected as people, and that spirit was missing. You could feel it and we scored very low. Spirit means everything and it’s so similar to dancing and cooking. I can relate because I am a martial artist and I can relate my martial arts to everything.”

“Working with Mark Dacascos was a great experience because Mark himself is a martial artist. He does kung fu in the kind of style that we like. Mark can perform all his stunts himself. Physically he’s a very talented person, not just in martial arts but also gymnastics, acrobatics, acting between the fights, everything. A lot of times some actors, even though they do fight scenes there’s no expression on their face, but Mark’s got everything.  He’s better than a lot of stunt guys out there!  So we had great fun! when I’d ask Mark: Can you do this? He’d say “sure, no problem”. He’d perform.” -Koichi Sakamoto (Stunt/Fight Choreographer from The Alpha Stunt Team).

“A lot of people in Hollywood who make the big movies don’t understand this, but it’s really hard to cast somebody who can do the acting, do the performance, who can also do the action that is required for this kind of movie without looking like they’ve been doubled every five seconds!” -Steve Wang

Mark Dacascos Mark taking it to the bad guys…

Mark Dacascos Mark on the set Brotherhood of The Wolf

Masters of Kung-fu - A Shaolin documentary