For the first time in seven years, following their globally acclaimed “Wheel of Life” and “Kung Fu Masters” tours, the Shaolin performance troupe returned to the UK with Shaolin Live. Starting initially with a tour of Butlins Holiday Centres, they brought their new full-length live show to the Peacock Theatre in London. Playing as a direct follow-on from the story of the original “Wheel of Life”, that show will be available on Blu-ray, DVD and digital download on 30th November.

A twenty-strong cast of Shaolin monks take to the stage in a demonstration of a variety of Chinese martial arts skills. Ranging in age from 10 year-old children to men in their 20’s, each plays a different role be it a monkey boxer, sword fighter, acrobat, qiqong specialist or in team ups to exhibit their apparently superhuman talents.

There are lots of amazing feats of Qiqong

The younger members are just as skilled as their seniors

The young monks stretch out backstage

The performers leap to incredible heights

Set during 17th Century China, the show starts with a recap of the events of 1999’s original “Wheel of Life” show, which ended with the Emperor betraying the Shaolin Monks and burning their temple in Songshan to the ground. Five young monks survived, their identities known only to the Abbot. Fifteen years later, the survivors have continued their Shaolin training in secret and are known as the Five Elders. The story of the Elders and their disciples is expressed in various demonstrations of qiqong, weapon skills, acrobatics and wushu, loosely based on the popular legend of “The Five Elders of Shaolin”.

After a video reminder of some of the action from the original 1999 show, the cast line the stage and perform some gentle “qiqong” breathing exercises in perfect synchronisation. Having “gathered” their “qi” (“chi” or lifeforce), they run off the stage. Five young monks and their teacher then explode onto the stage in a sequence of somersaults. As they play with their teacher, it appears this is the haunted dream of the Emperor.

A lone monk in orange robes enters the stage and performs more qiqong exercises. The Emperor’s soldiers try to punch and kick his torso, but are repelled. One of them places a spear in the monk’s neck. Using only his throat the monk pushes down on the spear, bending the shaft.

We cut to the Shaolin disciples, quietly living their lives in peace. They forge their various weapons, giving a brief demonstration of each one; the Jiu Jie Bian (nine section whip), San Jie Gun (three section staff), Guandao (halberd), and Shuang Chui (double mace). The blacksmiths setting leads to a second demonstration of “hard qiqong” skills, with two flat metal bars being broken over the head of one of the disciples. A slow motion replay reveals he broke them edge-ways on his bald scalp! The rest of the monks each perform short but impressive bursts of acrobatics and wushu. To conclude the chapter, a diamond-shaped spike is brought onto the stage. A melon is used to illustrate the sharpness of its point before a monk balances on it with his bare stomach. 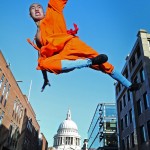 In a more sedate section, nine monks line up to perform Tai Chi exercises, all perfectly in time and choreographed to the show’s musical soundtrack. It is not long before the monks are throwing themselves around the stage, followed by a demonstration of some extreme flexibility.

The original “Wheel of Life” featured no female performers, but here we have the famous Ng Mui portrayed by a very capable young lady. She debuts with a beautiful and graceful Taiji Jian (Tai Chi Sword) routine, followed by some more explosive Shaolin kung fu as she teaches her young students. Three young girl students perform with traditional Chinese fans, flicking them open and closed with power and exquisite timing. Ng Mui gives a particularly impressive demonstration of her skill and accuracy with a whip when she tears a sheet of newspaper held by a monk into the tiniest of pieces.

As the show progresses, different styles of wushu are performed, including Zuiquan (Drunken Fist), Houquan (Monkey Boxing), Shequan (Snake Fist), Tanglangquan (Praying Mantis) and Yingzhaoquan (Eagle Claw). There are spectacular dulian (duelling) sets too, ranging from open hand to sword versus spear, double swords, poles, and Chinese flag dancing. Particularly remarkable is a routine between two monks, one of whom is armed with a spear. The unarmed monk sits on the floor, whilst the spear is thrust rapidly at his face. He rolls his head to evade the spear tip with inch-perfect timing. If that wasn’t impressive enough, both participants are then blindfolded, and repeat the trick!

The kids give an inspiring performance

Lighting the candles and incense before the show starts

Last minute stretch before exploding onto the stage

A must see for fans of Chinese martial arts

The young kids in the show are as highly-skilled as their senior mentors. The real Shaolin monks were noted for their expertise with the pole, and these kids give a great demonstration of their dexterity, twirling the poles into a furious frenzy, again, all with perfect synchronised timing. Their acrobatic and dulian skills are also equal to the older performers.

The show concludes with what for many is almost superhuman. Using “hard qiqong”, developed over many years of training, the monks balance on sharp spear tips, swords that can slice through melons, and have concrete slaps, wooden staves and iron bars broken over their torsos, limbs and heads. One monk balances in a handstand on the tips of his forefingers. Even if you have seen it before it is always impressive and will leave you wondering, “How do they do that without serious injury?”!

I have been lucky enough to see the previous two incarnations of the Shaolin performances, “Wheel of Life” and “Kung Fu Masters”, live on stage. I also got to see the trimmed down version of this show when they performed at Butlins. There is definitely a raw energy to be felt when you see the performances in the flesh. Whilst the onscreen version can never quite replicate the smell of the incense, and the dramatic noise, much of that energy has been retained on film. There is no denying that you are watching some very special physical skills.

The original “Wheel of Life” show did a good job of telling a story interspersed with the physical performances. With this show, the story is not given such great emphasis. If you have never seen a Shaolin performance show before, this one is packed to the rafters. The variety of wushu and weapons skills, acrobatics, and the ever-impressive hard qiqong demonstrations is immense. It is also a welcome change to see the inclusion of female performers too. The onscreen version is well filmed with an appropriately atmospheric soundtrack, and has one major advantage over the live shows – the use of slow motion replays.

When I saw the live version, I was with my wife, children and the children’s grandparents and a huge audience of all ages. I can genuinely say they were all thoroughly entertained, and just about every kid there wanted their picture taken with the monks afterwards. It really is a spectacular show that the whole family can enjoy. If you are a fan of Chinese martial arts and acrobatics in particular, or are entertained by extreme physical skills, it is a must-see!

The performers flexibility is impressive

The show is packed with martial arts and acrobatics

Martial Art of the Month: Silat