To call “Iron Fists and Kung Fu Kicks” a documentary on martial arts films is only painting half of the picture. While the movie certainly accomplishes that feat, and admirably so, what’s really at work at its core is the examination it offers of how significant an impact martial arts has made on every aspect of entertainment, and how one development has fed into another.

With a who’s who of experts to guide viewers through the ebb and flow of the history it explores, “Iron Fists and Kung Fu Kicks” is a true Hall of Fame run of everything that martial arts aficionados adore.

“Iron Fists and Kung Fu Kicks” isn’t as much a documentary on martial arts as an entertainment genre than a dissertation on the impact of martial arts on popular culture.

The movie hits on all the points you’d expect, from the martial arts movie stone age embodied by “Billy Jack”, the rise of Bruce Lee to worldwide fame and the Shaw Brothers era, to Jackie Chan redefining everything about action, stunt work, and pain itself. Where the movie really excels however, is in the attention it gives to the lasting impact of all of these on the culture and climate they were born out of.

The great Scott Adkins appears in the movie

Jackie Chan did Parkour before Parkour!

With Bruce Lee and the era of 70’s kung fu schlock arriving, millions of African-Americans would find an unexpected paragon during the Civil Rights movement. Meanwhile, Jackie Chan’s genre-redefining approach to stunts and action filmmaking is pointed to by renown stunt coordinator Jeff Imada as the forerunner to parkour, with the movie immediately segueing to the legendary freerunner to reinforce the point.

The movie touches upon other eras as well, with the rise of VHS being a trip down memory lane worthy of a documentary all on its own. The rise of B-movie stars like Don “The Dragon” Wilson and Cynthia Rothrock leads right into the 21st century’s own subculture of action stars lead by the likes of Scott Adkins.

Stunt pro Amy Johnston is als interviewed in the film

At the same time, it also takes a turn into Billy Blanks’ creation of Tae Bo that took the world by storm in the mid-90’s. The movie also hits upon the advent of YouTube, with Amy Johnston and Eric Jacobus sharing how YouTube videos have opened doors for them that wouldn’t have even existed twenty years ago.

Covering almost any other subject matter, the movie’s approach might come off as scattershot, but in “Iron Fists and Kung Fu Kicks”, it’s the most comprehensive structure the movie could have taken to drive home its thesis that martial arts has found some kind of home in just about everything involving a camera or an internet connection.

Simply for the extensive collection of interviews with authors, stunt people, professional competitors, and everyone in between, “Iron Fists and Kung Fu Kicks” isn’t to be missed. However, what really seals the deal is just how thorough a job the movie does on cementing the spot martial arts has permanently carved out in every corner of popular culture. “Iron Fists and Kung Fu Kicks” is true joy for action lovers and a true rundown to remember! 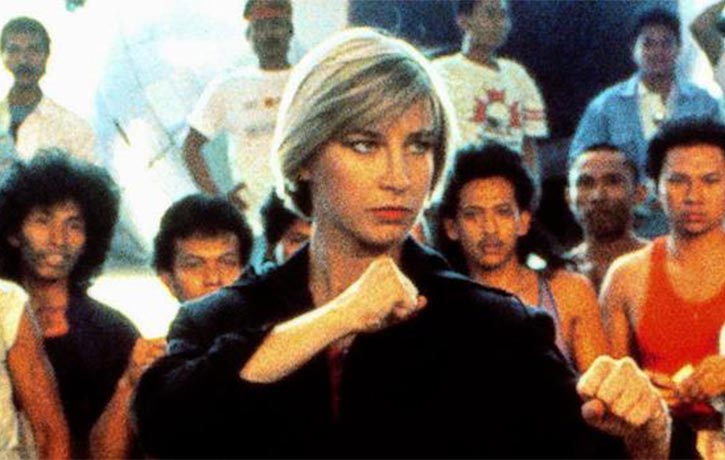 Have you seen “Iron Fists and Kung Fu Kicks”? What are your thoughts on this nostalgic love-letter to the genre of martial arts cinema and which action star from the documentary’s lineup impressed you the most?

LET’S THROW DOWN! BRING YOUR IRON FISTS AND KUNG FU KICKS TO THE FU-NIVERSE, for the latest news, Top 5’s, Top 10’s, interviews, act like a kung fu BOSS in your own KFK gear and subscribe to get your (regular dose of kung fu) kicks on YouTube!