The “Fast and Furious” franchise has certainly come a long way since its inaugural installment, but that’s only to be expected for a series that’s lasted a whopping eighteen years. What’s far more impressive is how much the series has transformed from what it started out as, and in so doing, how much its utterly conquered the landscape of action movies in that time.

What began as a low-rent “Point Break’ with street racing” has transformed into a heretofore unseen level of action movie insanity, utterly unconcerned with tethering itself to reality and devoted only to beating its chest with how much it can out-cool the last bonkers action sequence it treated us to.

The latest chapter in the “Fast and Furious” franchise, “Hobbs and Shaw”, takes a detour from the series’ main continuity to focus on two of its biggest break-out characters, and delivers one hell of a satisfying curtain call for the 2019 summer movie season!

The shadowy Eteon terrorist organization is determined to slash down the Earth’s human population, in order to “save” the world from environmental calamity. Eteon is finally on the verge of getting their hands on the perfect doomsday device to set their plan into motion, a virus code named “Snowflake”, but their efforts are thwarted when MI6 agent Hattie Shaw goes on the run after injecting the virus into herself.

After Eteon’s cybernetically-enhanced super soldier, Brixton Lore, frames Hattie for the murder of her team, MI6 and the CIA turn to two of the best men they can find to track her down – DSS agent Luke Hobbs, and Hattie’s brother, Deckard Shaw.

While their past antagonistic encounters have left a lot of bad blood between them, Hobbs and Shaw reluctantly agree to work together to find Hattie, with Brixton and the forces of Eteon hot on their heels. However, with the virus lying dormant in Hattie’s bloodstream and set to disperse in 72 hours, it’s a race against the clock for who can reach her first.

The difference between 2001’s “The Fast and the Furious” and “Hobbs and Shaw” is like the difference between “Lethal Weapon” and “Last Action Hero”. What began as a tale of two non-conformists becoming brothers as they rebel against society has transformed into the most off-the-chain action movie franchise Hollywood has to offer.

Where Dominic Toretto and his self-described “family” once engaged in street-racing and low-level semi-truck heists, Luke Hobbs now dives out of a skyscraper in pursuit of a trio of repelling enemies. When our heroes might have once gone undercover to take down a Miami-based crime boss, they now stand toe-to-toe with a literal supervillain.

Brixton Lore has Hobbs and Shaw right where he wants them

Hobbs and family take a stand

Hobbs and Shaw are ready to rumble

Since fully hitting its stride with 2011’s “Fast Five”, the “Fast and Furious” franchise has stripped away any and all concern of remaining true to its relatively low stakes early days. With “Hobbs and Shaw”, it’s never been clearer that the series is bound and determined to consistently one-up the out-and-out insanity of the preceding installment. Indeed, the franchise has gotten so ridiculously good at doing so, that an animated cat voiced by Danny DeVito could probably pop up in next year’s “Fast and Furious 9” without anyone batting an eyelid.

The buddy chemistry of The Rock and Jason Statham also shows just how smart a play it was for the series to devote a spin-off to them. Hobbs and Shaw’s initial reaction to the very prospect of teaming up elicits one of the biggest laughs of the movie right off the bat, and the duo’s contrasting skillsets plays well into the action.

Straight out of the gate, Hobbs and Shaw bash in the heads of many henchmen in parallel fights as they each try to gain information on Hattie’s whereabouts. Once they’re forced to team-up, their competitive nature gives way to one thoroughly entertaining action sequence after another. One of the highlights sees Hobbs and Shaw in adjacent rooms, battling henchmen to reach a retinal scanner, with Hobbs completely unimpressed as Shaw fells a dozen opponents. In a series that’s always been about family, “Hobbs and Shaw” places its focus on teamwork. While its perhaps a little too heavy-handed in delivering its message at times, it does a fine job of placing our two heroes in situations to contrast their personalities and abilities in creative and frequently, hilarious ways.

Vanessa Kirby also comes close to stealing the film at times in the role of Hattie Shaw, with even Hobbs having a genuinely hard time pinning her down in their initial encounter. Frankly, Hattie proves to be such an integral player in the film, no “Hobbs and Shaw” follow-up would be complete without her. When it comes to Brixton Lore, Idris Elba is clearly having an absolute blast playing, in his own words, “Black Superman”, and is easily the most engaging villain the “Fast and Furious” movies have ever seen. Brixton’s cybernetic enhancements and the very sweet set of “Batman”-worthy wheels he travels on make for some of the craziest action scenes in the entire series. Naturally, no “Fast and Furious” movie would be complete without some automotive action, and “Hobbs and Shaw” certainly has its share, ranging from a chase through the streets of London and a vehicular battle in Russia that just about leaves a nuclear cooling tower in ruins.

Hobbs and Shaw prepare to face off with Eteon

Brixton brings a cybernetic edge to his mission

Hobbs and Shaw bring the heat

However, the finale in Hobbs’ native Samoa is a real home run, kicking off with our hero and his extended family standing their ground with a ritual Haka dance against their foes, something that has to be a first for contemporary action movies. The automotive craziness the “Fast and Furious” series has risen to is clear as day with the sight of Brixton’s fleeing helicopter towing a half dozen speeding cars alongside a rocky cliff like tea bags. And to say that the “Fast and Furious” series has a new champion for fight scenes would be an understatement. Brixton’s cybernetic enhancements have already allowed him to outmaneuver Hobbs and Shaw, and anyone else who’s gotten in his way, throughout the film.

The trio’s rain-drenched final smackdown is brutal, powerful, and simply mesmerizing, and with director David Leitch’s use of speed-ramping to capture each hit in all its slow-mo glory, it’s clear he brought over a few lessons from working as a stuntman on Zack Snyder’s “300”. Great minds truly do think alike!

“Hobbs and Shaw” is a wild, completely berserk, relentlessly thrilling, and immensely satisfying end to the summer movie season. Vanessa Kirby plants her flag as the latest warrior- woman to kick butt in modern action films, Idris Elba is by far the best villain the franchise has ever seen, the action sequences are simply out of this world, and The Rock and Jason Statham’s competitive buddy chemistry is more than enough to want to see Hobbs and Shaw team to infinity and beyond.

It’s exceedingly rare to see a summer-movie season bookended as beautifully as that of 2019, but the original “John Wick”-directing duo have accomplished just that with “John Wick: Chapter 3” and “Hobbs and Shaw”. It’s time to finally state the obvious – let’s have more stunt people directing action movies, please!

Hobbs and Shaw face issues on teaming up

Hobbs Shaw and Hattie band together to stop Eteon 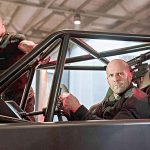 Hobbs and Shaw put the pedal to the metal

Seen “Hobbs and Shaw”; what are your thoughts on the film’s extravagant vehicular stunts and full-on fighting action? How do you think the next team-up of Rock and Stath should pan out? Let us know in the comments below; Like, share and join in the conversation on Facebook and follow us on Twitter & Instagram.