If you’re looking for a Bollywood actor who has a swagger and charm women can’t resist, a chiselled physique like that of Jean-Claude Van Damme, the fighting abilities of Jackie Chan, Tony Jaa and Scott Adkins combined, as well as the moves of a suave ballroom dancer, look no further than Tiger Shroff. His skills are clearly pronounced in his debut film “Heropanti”, which translates to “big attitude” or “hero attitude”.

In this action-romantic comedy, lead actor and newcomer Tiger Shroff steals the show as Bablu, a well-meaning man despite his ‘big’ attitude. Also shining in the spotlight is Indian model Kriti Sanon as Dimpy, Bablu’s love interest and the bratty younger daughter of the powerful, respected, but brutal Chaudhary, portrayed by the renowned Prakash Raj. Sandeepa Dhar and Dev Sharma star as lovebirds Renu, the older sister of Dimpy, and Rakesh,

Striking two birds with one stone

The respected but brutal Chaudhary does not believe in love marriages and arranges for his elder daughter Renu to be married to a man she does not love. However, on the day of the wedding ceremony, Renu escapes to elope with her boyfriend Rakesh, and Chaudhary becomes determined to find the couple at all costs.

Tiger aerial ing his way around

He and his brothers eventually locate and kidnap two of Rakesh’s friends, Karan and Jitesh, both of whom know nothing about Renu and Rakesh’s location and are beaten until Jitesh directs Chaudhary to Bablu. Once Bablu is also held captive along with a wrongly detained, dim-witted tourist Kiki, it is revealed that Babluis the one who helped Renu and Rakesh escape. The friends nevertheless are still not set free due to Bablu’s “hero attitude” and his refusal to leak Renu and Rakesh’s whereabouts since he firmly believes that the two should be together peacefully. More importantly, Bablu is in love with a woman later identified as Chaudhary’s younger daughter Dimpy, despite his friends’ protests.

A duel of grips

Tiger holding his own in 3 v 1 frenzy

Tiger brings charm and charisma to his dance moves

With Tiger’s raw talent, the fight scenes in “Heropanti” are something to marvel at. Whenever Tiger is in combat, he is always bound to do a flip, spin kick or both, all of which are accentuated with slow motion effects that allow viewers enough time to watch Tiger’s moves carefully and appreciate the extraordinary skills he brings to the table.

Ten minutes into the film is when our hero first appears in the first fight between Bablu and Chaudhary’s brothers and men. This fight draws notable inspiration from Jackie Chan films, as Tiger makes use of the gymnastics equipment around him to fend off his enemies; there seems to be some Scott Adkins’ influence as well, as evidenced in Tiger’s use of acrobatics in addition to the iconic Feilong roundhouse kick from “Undisputed 3”. Martial arts fans will assuredly enjoy this fight. 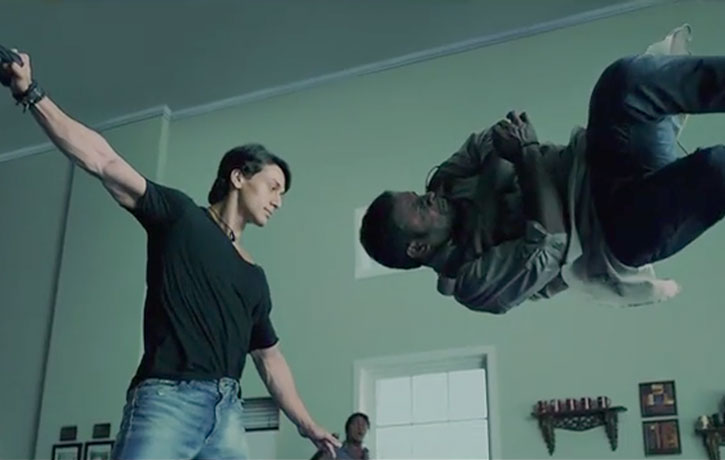 Tiger kicking through the challengers

Deflecting with an arm of steel

In the film’s second fight, Bablu teaches Dimpy’s attackers a rough lesson on consent 101: telling the attackers “No means no”. Tiger, besides performing some more amazing feats building on the first fight goes Tony Jaa-style here when he breaks a shovel in half with his bare arm and finishes a fallen opponent with the same falling spinning-kick Jaa did in the cave fight in “Ong Bak”. The final fight between Bablu and Rajjo is relatively brief but well-worth watching as Tiger lands a tornado kick and turning punch combo that sends Rajjo flying in mid-air, which just further solidifies that Bablu should be Dimpy’s prince charming.

Dimpy is awestruck as Bablu flips his way through

From the sky with love

Flipping over with flair

The entertainment is not just limited to the fights however, as there are the requisite Bollywood (rather infectious) song and (rather fetching) dance sequences to fill in the gaps between the fights. With Tiger and Kriti singing upbeat or heartfelt songs and dancing alongside the supporting dancers, the scenes feel like they’re straight off the Indian equivalent of MTV. Yep, believe it or not, this was my first proper Bollywood movie viewing!

Just as Jackie Chan’s movies have always portrayed him as the fighter who could act, here we learn that Tiger is a fighter who can sing, dance and act; a one-man show if you will. But would he beat Kurt Sloane (JCVD) from “Kickboxer” in a dance-off? Decide for yourself by watching the video below!

…and after all that you might want to cool down!

Heropanti is one film that pretty much has it all. Alright, the story may be a little exaggerated, unoriginal and drawn out longer than it ought to be, but with an exemplary physical talent as leading actor and a light-hearted Romeo-and-Juliet-like love story that is action-packed with eye-opening fights. It’s a promising showcase demonstrating the potential of Tiger Shroff’s capabilities. Check it out and keep an eye out for more of his movies coming out in 2017! 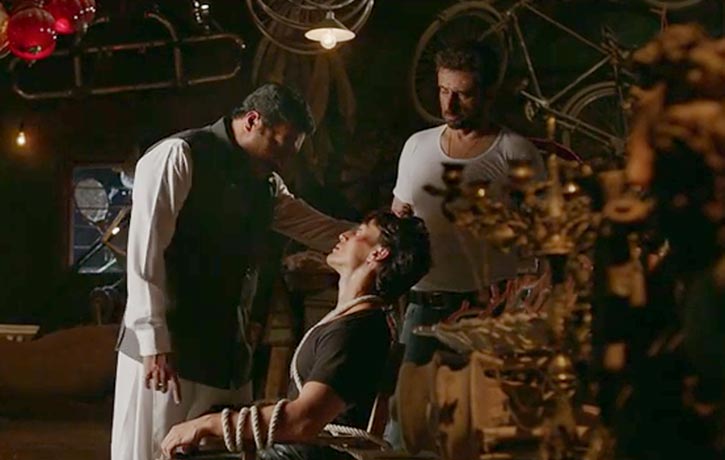 Bablu takes Dimpy out on a night shell never forget

The respected but brutal Chaudhary 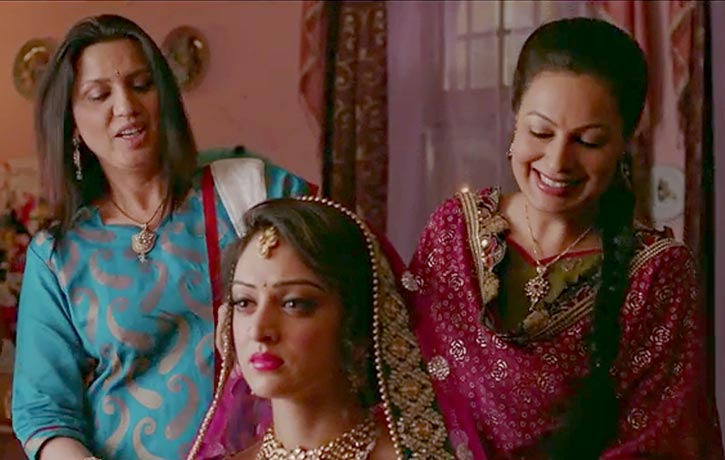 Getting ready for the main event

Renu with her true love Rakesh

Chaudhary will stop at nothing to find Renu and Rakesh