The late seventies and eighties saw many characters in American television and film imagined as Vietnam war veterans. From Oscar winning dramas like “The Deer Hunter” (1978), blockbuster action movies such as “Rambo: First Blood Part II” (1985), to numerous TV shows like “Magnum P.I.”, “Miami Vice” and “The A-Team”, the US entertainment landscape was heavily influenced by that fateful conflict.

“Missing in Action”, the first in a successful trilogy of movies, is Chuck Norris’ take on the war and its aftermath while also introducing one of his most famous characters, James Braddock. The movie chronicles his quest to rescue American prisoners of war (POWs) in Vietnam and ultimately make their existence known to the world.

While the movie of course has guns, explosions and action aplenty, there is a very serious edge and sombre tone permeating this story. Dealing with the possibility of prisoners of war not being allowed to return home even though the war has ended, is a weighty subject. The result, as you would expect, leans heavily on the action side more than drama but if you’re expecting just a simple frenzied romp, prepare to be surprised.

Chuck Norris plays retired Army Special Forces Colonel James Thomas Braddock, an ex-POW who masterminded his own and other captured US soldiers’ escapes from a Vietnam prison camp. M. Emmet Walsh takes on the part of Jack “Tuck” Tucker, a hard-living old army buddy of Braddock, who whiles away his time in seedy Bangkok bars. Ernie Ortega plays Vinh, a sadist of the Vietnamese Army, Braddock’s ex-tormentor in the prison camp and now his chief pursuer.

Also appearing is the always wonderful James Hong, undoubtedly one of the most prolific actors of all time, who assumes the role of General Tran. Rounding out the cast is David Tress as Senator Porter and Lenore Kasdorf as Ann Fitzgerald from the State Department, both part of a senate delegation team in Vietnam for talks with the government on the POW issue. The senator proves to be a buffoon and an obstacle for Braddock but at least the highly capable Ann is on his side.

Braddock is a tormented soul. An ex-prisoner of war who luckily escaped from a Vietnamese prison camp but knows first-hand that there are other American soldiers, supposedly missing in action but in reality languishing, just like he once did, in a still operational camp.

The US government has sent delegates to Ho Chi Minh City for talks but it’s useless. The Vietnamese government, fronted by General Tran, is full of lies, deceit and subterfuge and will never admit to still holding American soldiers. If those soldiers are ever going to make it home, Braddock will have to get them out himself.

Learning the whereabouts of the prison camp from an interrogation of General Tran at knifepoint, Braddock sets out to rescue the POWs. But first a quick stop-off in Bangkok to buy arms and to recruit ex-army buddy, the debauched-yet-honourable rogue, Tuck. Now, armed to the teeth, and with a trustworthy ally in tow, Braddock heads back to Vietnam with determination in his heart. However, the evil Vinh and his assassins are on his trail every step of the way.

Rumble in the jungle 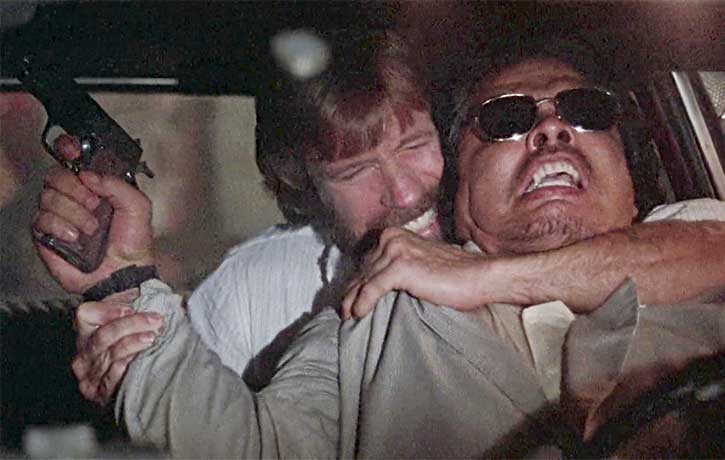 Braddock tangles with an assassin

“Missing in Action” serves up hefty doses of action throughout. Even in the movie’s quieter moments, you are rarely a few scenes away from another exciting conflict.

The opening sequence really sets the tone of this movie. It relays to the viewer that, for the most part, the action is going to centre around guns. This intense armed conflict sees a multitude of Americans and North Vietnamese falling under oppositional fire as US soldiers, led by Braddock, attempt to fight their way to their choppers. It does a good job of illustrating the chaos and seeming randomness of a warzone.

Another notable sequence is when Braddock leaves his hotel room through a window and covertly makes his way to General Tran’s residence to interrogate him. While the action level might be comparatively low, especially compared to the gun battles of other scenes, it is more than made up for with excellent tension in the stealth and scaling of urban buildings. These moments wouldn’t be out of place in the “Splinter Cell” video game series.

Braddock concealed but ready for action

A tussle of strength

The latter part of the movie centres around Braddock and Tuck’s rescue operation of the POWs. The main focus of the action again is armed combat. Once Braddock makes his presence known with some timed explosions, the action does not let up from there. Apart from machine gun shootouts, there is also an exciting battle with Braddock taking on all-comers from the water in a heavily armed attack raft. There are some excellent camera shots that show the boat at full pelt skimming the top of the river with Braddock at the mounted machine gun.

As “Missing in Action” movie stars one of the greatest martial artists of the big and small screen, you might expect there to be extended hand-to-hand combat scenes. However this is not the case. Surprisingly, Chuck never even does a high kick in this movie. The main action, as mentioned, is gun-based, which makes sense as the major set-pieces take place in warzone-type situations.

There are definitely some physical encounters, Braddock attacked by a knife-wielding assassin in his hotel room being the best. It’s an exciting tussle and a great example of close quarter combat with tight knee strikes using a one-handed Muay Thai-style clinch. Braddock also performs some efficient stealth attacks on adversaries using sweeps leaving them open to being finished off quickly. However, do not expect long-form one-on-one martial arts showdowns as in “Lone Wolf McQuade” (1983) or “Missing in Action II” (1985).

Braddock gets his hands on Vinh

Braddock tortured as a prisoner of war

Okay, it would’ve been nice to see a more pronounced antagonist, à la Soon-Tek Oh’s villain in “Missing in Action II”, as Vinh is not really up to his level. It’s surprising that they didn’t utilise James Hong more. He’s a great actor who could’ve easily stepped into this role and played a memorable foe.

It would’ve also been nice to see more sustained martial arts encounters but, given the story, it looks like they were going for more gun-based action complimented with special forces’ style infighting. But with or without a gun, Norris can always play a great action hero so it’s not a problem. If you don’t mind the relatively limited amount of unarmed combat compared to other Chuck Norris movies and just want to see a really good action film that’s definitely among his best, you certainly won’t be disappointed.

Braddock attacks from the raft

Remember “Missing in Action”; what do you recall best about this 80’s classic? What are your favourite Chuck Norris films and fight scenes? (Include a meme or two if you’re tempted of course!) Let us know in the comments below; Like, share and join in the conversation on Facebook and follow us on Twitter & Instagram.

Martial your energy through to the FUniverse armed with Top 5’s, Top 10’s, (including these Top 10 Chuck Norris Fight Scenes) in-depth interviews, get your KFK gear in time for Xmas, and subscribe for much more via YouTube!