Legends of the martial arts on and off the screen, Chuck Norris and David Carradine face off in a classic action film, “Lone Wolf McQuade”,  from Norris’ golden age of movies. Norris once again teams up with director Steve Carver who previously worked with him on “An Eye for an Eye” (1981), this time to even greater acclaim in a modern-day Spaghetti Western.

The one and only Chuck Norris plays the titular character J.J. McQuade, a veteran Texas Ranger who does things his own way but always gets results. McQuade must face, and hopefully bring down, obnoxious arms dealer and martial arts champion, Rawley Wilkes, played with sneering aplomb by David Carradine.

Texas Ranger J.J. McQuade is a relic of a bygone era. A lone wolf lawman who uses his fists and guns to bring criminals to justice with no care or concern for appearances. He’s more of a hero from the Old West than a modern-day officer of the law. 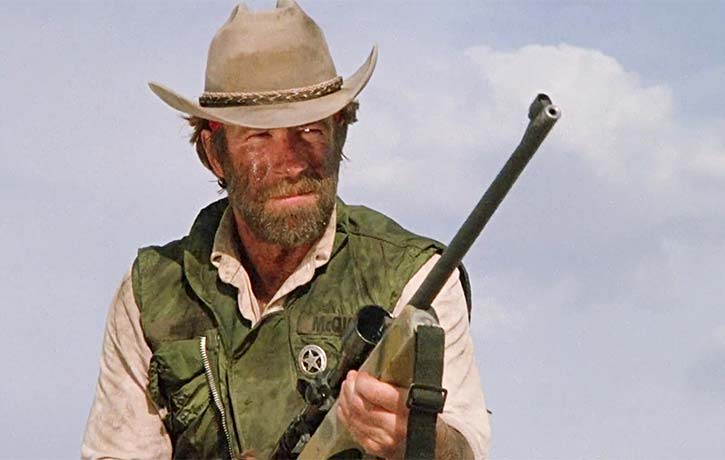 Texas Ranger McQuade takes on a gang of thieves

To help try and smooth out his rough edges, he’s ordered to partner with the eager, young latino State Trooper, Kayo Ramos. Ever the loner, that’s a non-starter in McQuade’s book, but he’s going to need Kayo’s help if he’s going to stop ruthless gunrunner Rawley Wilkes and his band of mercenaries.

McQuade and Kayo, with backup from FBI Agent Jackson, take the battle to Wilkes but McQuade is going to have his mental wits and physical limits tested. It’s going to take a lot of bullets, all his martial arts skills and big sacrifices to put Wilkes away for good.

The name Chuck Norris is synonymous with action and “Lone Wolf McQuade” definitely lives up to that reputation. With gun battles, fisticuffs aplenty, a breathtaking scene where Chuck clings onto a speeding pick-up truck and an epic martial arts showdown, action-lovers are assuredly served up the goods.

Being a multiple karate champion, Norris is renowned for his many skills and martial arts fans definitely click with his crisp kicks.

Mano a mano Norris vs Carradine 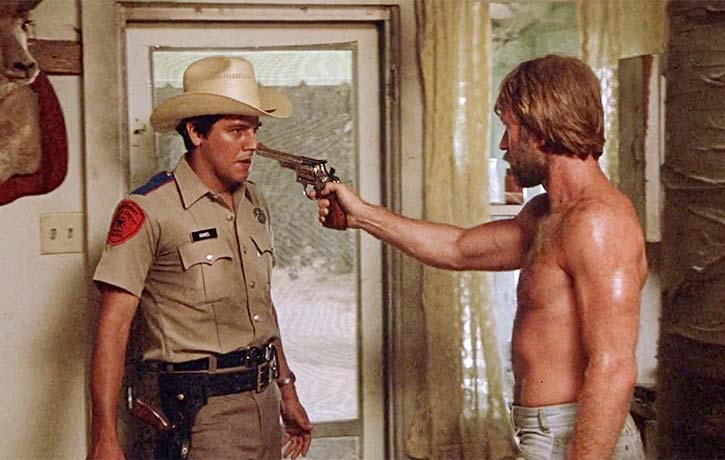 He always executes them with perfect form, but here they carry a more realistic quality about them. Those kicks are, of course, on show in this movie but he also demonstrates a range of other techniques in a brawl where he dispatches some of Wilkes’ thugs. He uses a variety of throws, chokes, wristlocks and even an aikido-style flip reminiscent of Steven Seagal.

While Chuck’s trademark flying sidekick does make an appearance in the previously mentioned scene, it returns later when McQuade finally gets his hands (and feet) on Wilkes. This time however, it is in the form of an impressive vertical leap. Carradine was not diminutive in stature by any means, standing at almost six feet tall which make Norris’ athleticism even more apparent.

With a clear western vibe from the start, guns were always going to play a part. The thrilling opening sequence sees McQuade take on a gang of horse thieves which quickly devolves into a gun battle. This is the first of many shootouts which build up to an explosive climax akin to a warzone involving machine-guns, bazookas and even army vehicles.

All that takes a back seat however, to the final confrontation between Norris and Carradine. Chuck Norris is a legitimate and highly-skilled martial artist and champion who became an actor. David Carradine was an actor who found martial arts later on in life. The question is, could Carradine really hang with Norris and put on a satisfying and convincing enough showdown? The answer is a resounding yes!

McQuade dispatches one of Wilkes men

With his training from the hit TV show “Kung Fu” along with his background in boxing, gymnastics and even dancing, he had the athleticism and skills to be a worthy opponent for Norris. With no wire-work, stunt doubles or overly-flashy moves, they crafted a gritty, grounded, realistic confrontation where every punch, kick and throw counted because it mattered. It’s a showdown worth waiting for.

If you’re a Chuck Norris fan, you’ve probably seen “Lone Wolf McQuade”. If not, seek it out immediately. It definitely belongs in Norris’ top tier movies along with classics such as “The Delta Force” (1986) and “Missing in Action” (1984) and it could be argued that it is his best work.

Also, it’s a pleasure to see Chuck in another martial arts super fight. Apart from Bruce Lee in “Way of the Dragon” (1972), Norris perhaps hadn’t fought as many other martial arts screen legends as I’d have liked , so seeing him square off with David Carradine is well worth the price of admission.

That memorable clash aside, the movie itself is top-notch with a great score. For fans of 80’s action and martial arts this still goes down a solid treat.

Agent Jackson is deadly with a crossbow

Even a lone wolf needs a wolfpack sometimes

Kayo learns what its like to be McQuades passenger

Wilkes tries to take out McQuade

Remember Lone Wolf McQuade; what do you recall best about this classic? What are your favourite Chuck Norris films and fight scenes…(include a meme or two if you’re tempted!) Let us know in the comments below; Like, share and join in the conversation on Facebook and follow us on Twitter & Instagram.

Whether you’re a Lone Wolf warrior or a modern-day MMA grappler, click into a veritable FUniverse decorated with all manner of martial arts; Top 5’s, Top 10’s, (including our Top 10 Chuck Norris Fight Scenes) exclusive interviews, get your KFK wear on in time for Xmas, and subscribe for much more via YouTube!