Batman and anime were made for each other, as anyone who’s seen the 2008 anime anthology “Batman: Gotham Knight” will readily agree. Furthermore, the idea of Batman, a character who already embodies very clear ninja influences, going back in time to feudal Japan is such a no-brainer, it’s amazing that no comic book scribe had even taken a shot at it until now. “Batman Ninja” is a visually captivating thrill-ride for both anime lovers and DC Comics’ fans alike, and while the third act owes more to “Power Rangers” than either one, devotees of both the Dark Knight and anime will no doubt walk away wreathed in smiles.

The role of billionaire vigilante ‘Bruce Wayne’ aka Batman falls to the voice talents of Koichi Yamadera for the film’s Japanese dub, and Roger Craig Smith for the English dub. Batman’s close allies, Nightwing, Robin, Red Hood, and Red Robin are respectively voiced by Daisuke Ono, Yuuki Kaji, Akira Ishida, and Kengo Kawanishi for the Japanese dub, with Adam Croasdell, Yuri Lowenthal (as both Robin and Red Hood) and Will Friedle voicing the Bat family in English.

Batman’s ever-reliable “frenemy” is voiced by Ai Kakuma in Japanese, and Grey Griffin in the English dub, while the villainous Gorilla Grodd is voiced by Takehito Koyasu in the Japanese dub, and Fred Tatasciore in the English. Bruce Wayne’s trusted butler Alfred Pennyworth is also along for the ride, with Hôchû Ôtsuka voicing him in Japanese, while Adam Croasdell jumps in again for the English. Rounding out the cast is Batman’s arch-enemy, The Joker, voiced by Wataru Takagi and Tony Hale in their respective languages, with The Joker’s sidekick, Harley Quinn voiced in Japanese and English by Rie Kugimiya and Tara Strong.

Batman and his allies adapt their skills to their new setting

The Joker will stop at nothing to conquer all of Japan

During an attempt to stop the latest machinations of the super-intelligent mutant ape, Gorilla Grodd, Batman finds himself inexplicably sent back in time to feudal Japan. After running afoul of his archnemesis, The Joker, and his sidekick, Harley Quinn, Batman is rescued by his on-and-off ally, Catwoman, and discovers the truth about what has transpired.

Grodd has partnered with the most feared criminal leaders of Gotham, including The Joker, Penguin, Two-Face, Poison Ivy, and Deathstroke, to rewrite history by travelling back to feudal Japan in order to conquer its various warring states. Along with Catwoman, several of Batman’s closest allies, including Nightwing, Robin, Red Robin, and Red Hood, were also sent back, along with his trusted butler and technical support, Alfred Pennyworth, all of them arriving in Japan two years ahead of Batman.

During that time, they’ve allied themselves with a mysterious ninja clan known as the “Bat Clan of Hida”, under the leadership of Eian, who follow a prophecy of a bat-like ninja from a foreign land who will bring order to the warring states of Japan. With the history of both Japan and the future of Gotham hanging in the balance, Batman and his allies join forces with the Bat Clan to put a stop to the nefarious plot of the villains of Gotham once and for all.

Most battles with Batmans rouges gallery dont end like this

Batman gets disoriented after being sent back through time

It’s no secret that Batman is essentially an urban ninja with a cape and cowl, and placing a heavy emphasis on the Ninjutsu aspect of the character is hardly a new idea. Indeed, 2005’s “Batman Begins” arguably took that idea to its pinnacle. The novelty of “Batman Ninja” lies in sending our hero back to the specific time and place where his tactics and training originated, as previously stated, doing so is such a no-brainer – it’s a wonder no previous Batman adaptation had done it already. (Indeed, Marvel’s answer to Batman, Daredevil, carries such a clear ninja theme himself that viewers may well yearn for him to undergo a similar adventure to feudal Japan by the time the “Batman Ninja” dust settles.)

Anime is, of course, known for its distinctive visual style all its own, and seeing Batman and his rogues’ gallery revamped to fit the setting of medieval Japan is a true feast for the eyes. Such mainstays of the DC Universe villains pool as The Joker, Harley Quinn, Two-Face, Deathstroke, and Poison Ivy are given complete visual makeovers to transform into warring daimyōs of the era, while Batman’s allies such as Nightwing, Catwoman, Robin, Red Robin, and Red Hood get their ninja-influenced skills and attire adjusted to fit the times. 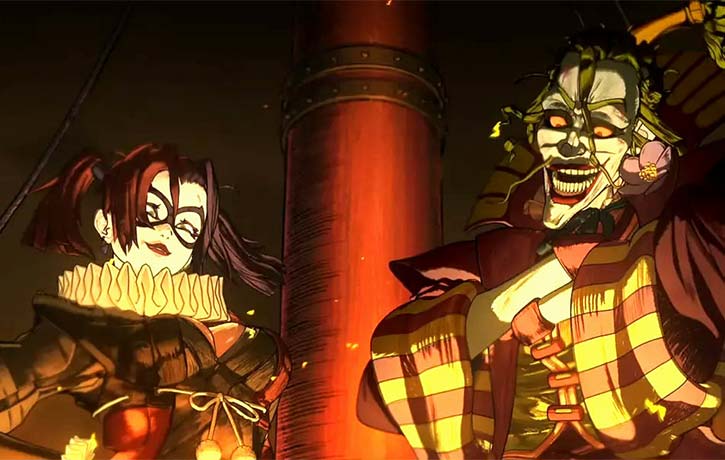 Batman and The Joker face off

Batman himself has his own garb adjusted to that of a Samurai and while Bane is seriously underutilized, the famed breaker of the Bat gets possibly the most applause-inducing makeover, reimagined as a domineering Sumo wrestler. Granted, not much is really done towards Alfred or Gorilla Grodd, but given that the latter is an arch-enemy of The Flash, his presence in the film is frankly commendable on the part of the filmmakers for finding a way to construct a time-travel story for Batman that doesn’t involve Barry Allen.

The fight sequences of “Batman Ninja”, as you’d expect, are fast, hard-hitting, and refreshingly fluid, stylistically speaking. Where a Batman anime twenty years ago might’ve placed an over-reliance on still frames and money shots interspersed within the action, the battles of “Batman Ninja” make use of these much more sparingly, while keeping things crisp and flowing. Early on in Batman’s arrival in his new time period, he finds himself battling a clan of the Joker’s assassins in a forest with Catwoman coming to his aid, and astute viewers will no doubt catch the obvious Easter Egg of The Dark Knight finding himself opposed by Seven Samurai!

Batman and Catwoman disguise themselves to blend in

Catwoman adapts in order to survive

Batman attempts find his bearing in this new era

Batmans enemies hatch some steampunk tech in their new setting

Batman finds himself a stranger in a strange land

The battle of the Bat Family allied with the Bat Clan aboard The Joker’s sailing ship is among the film’s best set pieces, and really gives viewers a chance to see the heroes and villains fit into the groove of their new setting. As the film nears its finale, however, it transitions into a decidedly more “Pacific Rim”-esque tone with the villains, under The Joker’s leadership, merging all of their mechanized pagodas into one gigantic battle-machine, with Batman in turn forming his own out of a gigantic swarm of bats. It’s a sequence that’s clearly more “Power Rangers” than DC Comics, but it still fits within the Japanese influence of the material, all of it leading up to each member of the Bat family going head-to-head with one of the villains. Batman himself gets into a blazing katana duel against The Joker – and really, who’s going to say no to the idea of a katana-wielding Batman?

On the novelty of its premise alone, “Batman Ninja” is a must for DC and anime fans alike, but it also sure keeps things engaging with a fluid animation style, gorgeous visual makeovers for every character, and mind-blowing action sequences. Bringing giant robots into the equation is certainly a different direction for The Caped Crusader, but it works with the parameters of putting Batman into a distinctly Japanese setting. Now that we’ve finally seen a Batman sent back to the ancestral homeland of his skill set and persona in anime form, the only logical thing to do now is give it the “Arkham Asylum” treatment. “Batman Ninja: The Video Game” – somebody make that happen!

Two Face rises to rule over one of Japans warring kingdoms

Batman and his allies regroup to stop The Jokers plot

Penguin has a few tricks up his sleeve

Batman heads off into battle

Seen “Batman Ninja”, what are your thoughts and impressions on the film? Which other fighting fit DC superheroes you would like to see made over, anime style? Let us know in the comments below; Like, share and join in the conversation with us on Facebook and follow us on Twitter & Instagram. (Check out KFK’s real-live FUperheroes & these movie reviews too while you’re at it!)