Influenced by Bruce Lee and the TV show “Monkey”, Ray began training in martial arts at the age of seven.

Initially training in Hapkido, Ray’s family moved across to the other side of London, and he began training in the Shaolin-based art of Nam Pai Chuan kung fu.

After four years training, Ray began learning the techniques and routines of the Northern Shaolin Chin Woo (Jingwu) kung fu school. The Chin Woo Association was established in the early 20th Century in Shanghai by the famous Master, Huo Yuanjia. The story of Huo Yuanjia and Chin Woo has been featured in the films “Fearless”, “Fist of Fury”, “Fist of Legend” and “Legend of a Fighter”, to name but a few.

After seeing Chinese wushu champion Jet Li in “The Shaolin Temple”, Ray decided he wanted to learn the same skills, and he began training with the Great Britain Wushu Team.

Snake Eyes considers his next move

Ray Park in his most iconic role

Ray is an expert in many wushu forms, including Daoshu (Broadsword)

Ray did all his own wirework stunts on X-Men

Playing one of his childhood heroes – Snake Eyes!

In 1990, aged just fifteen years old, Ray travelled to Malaysia. Chin Woo is one of the most popular martial arts associations in Malaysia, with many renowned masters. Ray spent three months training in Malaysia, returning six months later, to compete in the 1991 Chin Woo International Wushu Championships held in Kuala Lumpur. It was his first International Championship, and he won two silver medals.

Back in the United Kingdom, Ray began training and working in a gymnastics centre. Gymnastics training was perfect for the many acrobatic skills required by contemporary wushu. It is also one of the most difficult, but useful disciplines required to be a stunt performer, which Ray now dreamed of being. Ray trained every day in pursuit of his dream of being a wushu champion and a qualified movie stuntman.

Raymond Park was born in Glasgow, Scotland. At the age of seven he moved with his parents, younger brother and sister to the capital, London. Ray always wanted to be in the movies, to be like his heroes, but he was most inspired by martial arts. His father’s love of Bruce Lee films sparked Ray’s interest in martial arts, and he encouraged the youngster to train. Specialising in the traditional Chinese Northern Shaolin Chin Woo kung fu, Park moved on to master various other styles, most notably modern wushu. In 1991, at the age of sixteen, Ray became a member of the Great Britain Wushu team, competing in his first international tournament in Beijing, China, at the 1st World Wushu Championships. Ray was the first Wushu athlete from Great Britain and Europe to place in the top seven in the world. He went on to compete for Great Britain for another six years, winning several national, European and international championships.

Pursuing his dream of working in action movies, Ray’s work as a stunt double on the movie “Mortal Kombat: Annihilation”, brought him to the attention of the stunt team working on the first Star Wars prequel. His impressive skills won him the role of the film’s deadly bad guy, “Darth Maul”. The character proved to be one of the most popular in the franchise, and launched Park’s movie career.

Highlights of Ray Park’s many acrobatic and weapons skills

In the autumn of 1996 Ray returned to the UK after three months’ training in Malaysia. As well as training in gymnastics and martial arts, Ray was training to become a qualified stunt performer. A stuntman working on the “Mortal Kombat” sequel had seen Ray practising his wushu and gymnastics, and asked if he would be interested in auditioning. The producers were looking for many different styles of martial arts for the film.

Initially playing one of the Reptiles, Baraka, Ray’s impressive martial arts skills and ability to perform all his own stunts, resulted in him being kept on the film and doubling for Rayden, played by James Remar. Ray wanted to promote Chinese martial arts, specifically wushu, and was allowed the opportunity to incorporate many wushu techniques into Rayden’s fight scenes.

In 1998 George Lucas began pre-production on “Star Wars Episode I: The Phantom Menace”. He was looking for someone exceptionally skilled with weapons to help illustrate a time when his Jedi and Sith characters were at the peak of their powers. Park auditioned for Lucas and the film’s producer, Rick McCallum, demonstrating his acrobatic wushu skills with the cudgel and sword. They were so impressed by Ray’s performance and “martial spirit”, that instead of casting him as a fight double, they gave him the role of the film’s bad guy, “Darth Maul”.

Darth Maul’s deadly skills mean he can take on two Jedi at once!

Darth Maul watches his back

Danger from above as Toad in X-Men 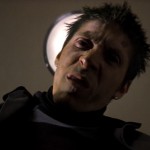 Ray can handle many different kinds of weapon!

Ray as Raiden in Mortal Kombat

Park is proficient in many weapons including the Chinese broadsword

As Edgar in the hit TV show Heroes

During his training in Malaysia, Ray had learned many one, two and three-person weapons routines, which was perfect for showcasing his wushu skills in the light sabre battles. The end fight scene proved to be the highlight of the film and Darth Maul became arguably it’s most popular character.

Park impressed Gillard with his versatility and variety of skills. When Gillard moved on to his next project, Tim Burton’s “Sleepy Hollow”, he took Ray with him, this time doubling for Christopher Walken’s Headless Horseman. Ray utilised his spinning and twirling sword skills, giving the Horseman’s deadly pairing of axe and sword an exciting and exotic flavour.

Ray’s experience on Star Wars made him decide to abandon his pursuit of becoming a stuntman, and instead pursue a career as an action star. He soon won the role of Toad, henchman to Sir Ian McKellen’s Magneto, in the first “X-Men” film. This in turn won him the role of Ross in the Antonio Banderas / Lucy Liu action film, “Ballistic: Ecks vs Sever”. It was the first role that Ray’s face hadn’t been hidden behind heavy character make up (or not there at all, as in “Sleepy Hollow”!).

Wanting to improve his acting skills, Park relocated to Los Angeles, and took on a variety of smaller roles. In 2009, he landed the role of one of his childhood heroes, Snake Eyes, in “G.I. Joe: The Rise of the Cobra”, a role he returned to in the 2013 sequel. It was the perfect role for Ray’s martial arts, gymnastic and weapons skills.

Park continues to forge a career playing physical roles in some of the most iconic film, television and game franchises, and he has proven to be a fan favourite at film conventions globally.

The epic final fight from “Star Wars Episode I: The Phantom Menace”