The only thing better than a sleeper hit like “Blade” is an equally strong and arguably superior follow-up like “Blade II”.

Acclaimed filmmaker Guillermo del Toro steps into the director’s chair for the second adventure of Marvel Comics’ legendary vampire hunter, and ramps up the action of the first film while giving the sequel a much more overtly horror movie look and feel. In the pantheon of vampire movies, “Blade II” is even more unique for something else – upon closer inspection, del Toro and writer David S. Goyer have effectively crafted a martial arts laden vampire film out of the backbone and DNA of a traditional zombie movie.

Wesley Snipes returns to his signature role as the dark and brooding hybrid of man and vampire, Blade, with Kris Kristofferson reprising his role as Blade’s ally and mentor, Abraham Whistler.

They are joined by a new associate, “Scud”, played by Norman Reedus, and at the request of the Vampire Nation’s ruler Damaskinos, played by Thomas Krestchmann, all of them find themselves reluctantly joining forces with their vampire enemies. These include Damaskinos’ daughter Nyssa, played by Leonor Varela, and Reinhardt, played by Ron Perlman, in order to take down Jared Nomak, played by Luke Goss, the first of a new breed of vampires that threatens to wipe out both sides.

In addition to his duties as fight choreographer, Hong Kong superstar Donnie Yen also appears in the film as one of Blade’s new vampiric allies, Snowman, with the only major disappointment of the film being that he and Blade unfortunately never get to face off!

Whistler tends to the wounded Blade 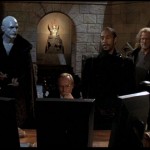 The Vampire Nation offers a truce to Blade

The Reaper horde doesnt faze Blade at all

After the apparent death of his closest ally Whistler in the first film, Blade learns that his mentor is still alive and with the assistance of his new confidant Scud, he manages to track him to a vampire safe house in Prague. Their reunion is interrupted, however, by the arrival of emissaries from the Vampire Nation, and the news that a vampire named Jared Nomak has morphed into the first of a new, deadlier breed of vampires codenamed “Reapers”, who feed on humans and normal vampires alike.

Although he knows that there’s more to this story than he’s being told, Blade agrees to an uneasy alliance with The Bloodpack, a tactical unit trained specifically to hunt him, to put a stop to the Reapers before the plague spreads beyond control.

Riddle me this, readers! What sub-genre of horror typically revolves around the outbreak of an incurable pathogen that transforms those afflicted into ravenous cannibals with an insatiable hunger for human flesh which is spread through bites? If you said “zombie movies”, you’d be correct, but what you may not realize at first glance is that this also perfectly summarizes the premise of “Blade II”. Our title character may not list his occupation as “zombie hunter”, but that’s exactly what he finds himself doing once this newest breed of vampires breaks out. 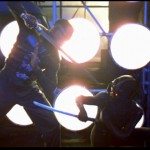 The battle comes to a stalemate

Reinhardt should know better than to push Blades buttons 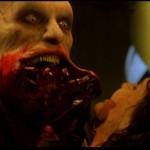 Reapers not your average vampires

The look of the Reapers is a clear homage to the classic Nosferatu look, but once again, del Toro and Goyer are masters of misdirection in designing the appearance of the Reapers.  They look impossibly pale, almost like a human corpse, with blood frequently seen dripping down their jaws, often descending on their prey as a massive horde. Save for Nomak, none of them appear capable of speech or communication beyond hisses and growls. Sound familiar?

The first “Blade” was a hit with audiences and helped revive the superhero genre partially because of its re-imagination of traditional vampirism as something akin to a disease, but “Blade II” is the kind of sequel to take the concept of the original and expand upon its premise in a way that feels completely fresh and new. Normal vampirism may be a disease, but ‘Reaperism’ is a plague that transforms the average vampire into…. a ZOMBIE!

Wesley Snipes is on his A-game from the opening action scene involving Blade slicing his way past a vampire gang to rescue Whistler. Where the sequel improves on the original is something else that should serve as a template for action in superhero films and indeed, in anything involving superhuman martial arts.

Nomak is cursed with the Reaper virus 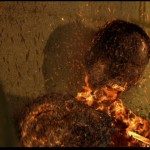 John Salvitti is on fire in his cameo in Blade II 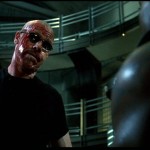 If you want something done right you gotta do it yourself 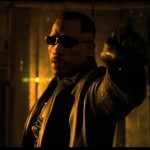 There’s wire-fu and CGI all over the place here, but it’s used as a tool to augment the fight sequences rather than to create them. We first see this in the duel in Blade’s safe house with two vampire ninjas. As Blade and his opponents do battle, we see the superhuman strength and agility of vampires brought to life through CGI amid the sword-twirling action, but not to the point of removing the actors from the equation. It’s all there to fill in the gaps of vampire abilities that go beyond what any human can physically do, and it serves to make the flavor of action the film offers up seem more real.

Blade’s two match-ups with Nomak have a phenomenal grasp of that balance, with Snipes and Luke Goss twirling through the air on wires, punching each other as they fall from a scaffolding, but all as a tool to show off their vampiric abilities.

Blade’s final duel with Nomak, coming after the obligatory scene of Blade destroying a few dozen henchmen single-handedly, is exactly how superhuman martial arts should be done. There’s plenty of our hero and villain physically throwing down to make their battle feel epic-authentic, but with each little moment of CGI slipped in to show them punching each other across the room and leaping fifty feet in the air to leave huge craters in the floor or the wall. You really feel a surge of believability in the battle because of how and where the CGI and wire-work are applied. Now that’s what I call a superhero showdown!

Blade leads The Bloopack on the hunt 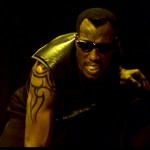 Blade is ready for the Reaper hunt

Blade could have a future in pro wrestling

The first “Blade” took a second string Marvel character and made him a household name with an approach that managed to improve upon the source material. The sequel takes it even further with a clever premise that transmutes vampires into a zombie movie, and stellar action sequences that, like its predecessor, form an ideal template for superhero action and super powered martial arts alike.

Whenever Blade makes his grand debut in the Marvel Cinematic Universe, it would most certainly behoove them to take a look “Blade II” along with the original, and just keep doing what they were doing!