If you asked the average moviegoer what the first Marvel superhero film they saw was, you’d probably get a range of answers from Iron Man to Spider-man or maybe X-Men. Some martially astute fans might even say “Blade” (1998) which has been credited with starting the modern big screen superhero craze.

But to find the answer, which might surprise even the most hardcore Marvel movie fans, you have to go back a further nine years to the 1989 version of “The Punisher” starring Dolph Lundgren. Long before Marvel box office behemoths were made with budgets in the hundreds of millions of dollars, “The Punisher” was a lower-budget affair typical of contemporary 80’s action flicks.

Even though it doesn’t rely a heavily on the Marvel comic canon for its story and secondary characters, it nonetheless treats the subject material seriously and the result is a gritty, violent actionfest with just the right amount of theatre making it totally worthy of the character…

Action movie legend Dolph Lundgren, takes on the main role of Frank Castle, a New York detective who witnesses the horrific murder of his family right before his eyes.

Pushed over the edge, he becomes The Punisher, a grim vigilante who delivers brutal justice to The Mafia criminals of the city. Frank’s ex-partner, Detective Jake Berkowitz, who has been trying without success to capture Frank for his friend’s own good for the last five years is played by Louis Gossett Jr.

Gianni Franco, Mafia family leader and the man responsible for the murder of Frank’s family is played by a suave Jeroen Krabbé. Kim Miyori plays Lady Tanaka, the first female head of The Yakuza, and a ruthless crime boss who’s looking to place the Mafia under her control. Tanaka’s adopted daughter who also doubles as her henchwoman is portrayed by the late Zoska Aleece (aka Zoshka Mizak).

Rounding out the cast is Nancy Everhard who steps into the role of Berkowitz’s ambitious new partner, Detective Sam Leary, and Barry Otto who plays The Punisher’s informant, drunk thespian Shake.

Frank Castle aka The Punisher

Since Frank Castle’s wife and two children were killed five years ago in a car-bomb by the mafia, Frank has been eliminating mobsters in the guise of ‘The Punisher’.

His accumulative one hundred and twenty-five bodycount has forced Gianni Franco out of retirement and to return to America from Europe to assume control as leader. The decimation of their ranks also puts the mafia in a vulnerable position with the Japanese Yakuza eyeing this as an opportunity to take over. Their leader, the first female to ever head the Yakuza, Lady Tanaka, arrives in New York to ruthlessly execute this objective. After Tanaka’s operatives, led by her daughter, puts on a show of strength by slaying mafia members in the middle of a drug deal, Lady Tanaka has the mafia leaders’ children kidnapped. She means for the Yakuza to take over and has no compunction whatsoever about what methods she employs.

At the mercy of Lady Tanaka

Mafia Boss and The Punisher working together

Taking out the Yakuza

With the mafia now at Lady Tanaka’s mercy, the only person that can stand in her way, rescue the children and ultimately have a hope of defeating her is The Punisher. But he will have to do it with Berkowitz and Leary on his trail every step of the way. The Punisher will also have to put personal hatred aside and help Franco if he is going to save the city from the Yakuza threat.

When you combine an action icon like Lundgren with a character like The Punisher, it should be a no-brainer that the result will be action and lots of it. Happily this is actually the case. In the first five minutes we get to see The Punisher stealth-attack a mafia house and clinically take out a bunch of goons one by one.

The next major action set-piece sees the Yakuza brutally strike the mafia on the docks during a drug shipment. In keeping with their Japanese origins, the attack is done ‘ninja style’ but with a modern-day twist. As the initial attack is a covert one and from water, the Yakuza come clothed in masked wetsuits which give the impression of shinobi shōzoku, or traditional ninja garb. 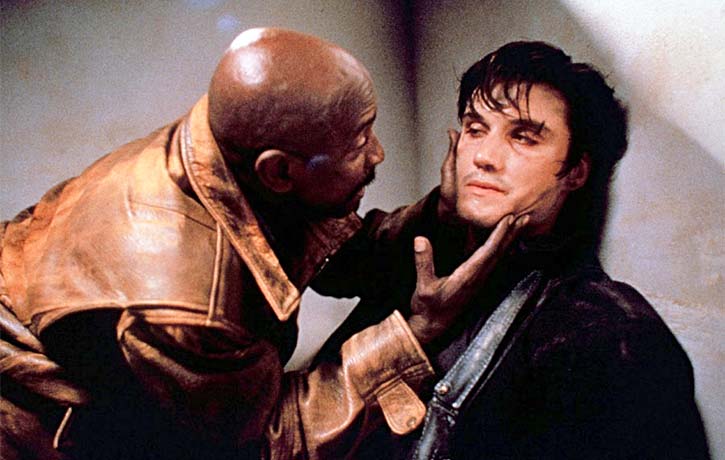 The Punisher was punished too

Other Yakuza are dressed in dark clothes and black ski-masks which again are reminiscent of ninja. Even though the weaponry they use may not have a strict basis in historical fact, they do seem to have a ninja-esque flair about them with spiked projectiles and shoe-knives being utilised. These weapons coupled with modern dart guns and regular firearms give a vibe of old-school martial arts skills combined with new technology leaving the viewer with the impression of what a modern-day ninja attack might look like.

The Punisher enters the fray with guns and knives as his weapons of choice, which makes sense because when you think of the Marvel comic character, even though he is skilled in martial arts, it is armed combat that you predominantly associate with him. It is this style of combat which makes up the bulk of the many conflicts throughout the movie.

No other moment personifies the gun combat over hand-to-hand combat than when The Punisher enters a room full of villainous katana-wielding kendo practitioners. He doesn’t grab a sword and take them all on en masse, he just riddles them with bullets from a machine gun instead. A slight echo of Indiana Jones just shooting the swordsman in “Raiders of the Lost Ark” perhaps, but it’s probably what somebody like The Punisher would do if he really existed.

Punisher on the prowl

Lady Tanaka is not somebody to mess with

When The Punisher does employ hand-to-hand combat, it is usually in one-and-done type situations when he unleashes attacks like powerful headbutts, knee strikes and side-kicks to unequivocally take out an opponent with devastating immediacy.

The best two martial arts clashes are saved for last. The first is when The Punisher takes on two of Lady Tanaka’s henchmen. Here you can see Lundgren’s powerful karate background come to the fore with his roundhouse, crescent and spinning back kicks on display.

The second is when The Punisher battles Lady Tanaka’s daughter. Now Lundgren is an amazing physical specimen who actually knocked out Sylvester Stallone landing him in a hospital ICU during the filming of “Rocky IV” (1985). The actress Zoska Aleece is very diminutive in size compared to Lundgren so it might seem implausible that they could possibly put on a believable showdown. However it’s a testament to Aleece’s athleticism and kicking ability along with excellent direction from Mark Goldblatt that they do craft a memorable confrontation. Using various blade-based weapons and a barrage of impressive kicks, Lady Tanaka’s daughter makes a surprisingly capable opponent for The Punisher.

Advancing on the enemy

Mother and daughter team up

The Punisher is relentless

A spinning back kick finds an ideal home

With a world abundance of superhero movies these days, especially Marvel ones, and with three other live-action versions of the character since this film, “The Punisher” is a movie that might get a little lost in the shuffle, but I sincerely hope it doesn’t.

There is so much to like about this interpretation and it can stand head-to-head with any other version and was deserving of a sequel. Dolph Lundgren was an excellent choice for the role. We know he has a great physical presence and that the action scenes would be no problem for him, but he does also add some depth so the viewer can really see tragedy in the character of Frank Castle. A paradox maybe, but perhaps we can appreciate such a powerful character all the more when the actor playing it explains where he’s come from, see the candidly transparent Ted Talk video of the real Dolph below:

Back to the movie…The Punisher delivers some nice one-liners so he’s not just a grim avenger. There’s a light sprinkling of humour on show too. Louis Gossett, Jr. adds a real touch of class to proceedings, one scene in particular when he finally gets face to face with Frank after all the years pursuing him carries some genuine weight. Kim Miyori really throws herself into the role of Lady Tanaka and owns most of scenes she’s in. Also, the character itself makes for a very memorable villain. I’ll be surprised if Lady Tanaka doesn’t make it into the comics at some point.

Even though it doesn’t pull straight from the Marvel lore, fans of the comic character should enjoy seeing Frank Castle brought to life respectfully in all his violent glory. Even if you’re not familiar with The Punisher, this movie can be enjoyed as a great example of a decently-directed 80’s action movie. Finally it’s definitely one of Lundgren’s better films, which alone makes it worth a watch.

The Punisher with his street buddy Shake

Ninjas strike at the dock

The Punisher closes a bullet wound

Lady Tanaka goes beyond the line

Detective Berkowitz wont give up on Frank

The Punisher issues a warning

Do you remember “The Punisher”, Marvel’s first superhero film from some 30 years back…? Would you rank this among your favourite Dolph Lundgren movies? Which do you consider his best action scenes or fights to date? Let us know in the comments below; Like, share and join in the conversation on Facebook and follow us on Twitter & Instagram.

BE THOU NOT IN DARKNESS…GO INTO THE LIGHT OF THE FU-NIVERSE…for more reviews, detailed interviews, Top 5’s, Top 10’s, get KFK’d in the right gear, and subscribe for more redemptive fights on YouTube!