Yuen Siu-tien, father of the legendary Yuen clan of martial arts stunt performers and choreographers, that include Yuen Woo-ping, stars as “Grandfather”. Trained in Peking Opera, he began his acting career in 1949 at the age of 37, in the first Wong Fei-hung film to star Kwan Tak-hing, “Story of Wong Fei-hong”.

He would gain international fame as the eccentric martial arts master Pai Chang-tien in Jackie Chan’s breakthrough movie, “Snake in the Eagle’s Shadow”. He followed this up with his defining role as the sozzled Beggar So/Su in 1978’s “Drunken Master”. Due to international variations in credits, subtitles and dubbing Yuen Siu-tien was also known by many as Simon Yuen, Sam Seed, or Ol’ Dirty. Rapper and founding member of the hip hop group Wu Tang Clan took his name Ol’ Dirty Bastard from one of Yuen’s final films, “Ol’ Dirty and the Bastard”.

There are fights from the first minute to the last

Kong Do, also known as Chiang Tao stars as “Shu Ba”, a deadly martial artist with a dark past. As an actor he appeared in over 200 films and went on to become an action director in his own right. His extensive filmography includes “Men from the Monastery”, “Challenge of the Masters”, “The Kung Fu Instructor”, “Executioners From Shaolin”, “Return to the 36th Chamber” and “Ninja Terminator”.

A regular player in many 1970’s and 80’s low-budget Taiwanese martial arts pictures, Cliff Ching Ching plays “Master Tang/Chen”, the local gang boss. Usually performing a villainous role, he has appeared in “Adventure of Shaolin”, “The King of Fists and Dollars” and “Shaolin Temple Strikes Back”.

Drunken fists are not to be taken lightly

Two hapless brothers get themselves into hot water over a cocktail fighting racket. They begin training with the highly skilled Lu Chin Fei, who is troubled by his past. When the brothers become embroiled in a fight over the champion “Big Red Cock”, they inadvertently lead Lu Chin Fei ‘s deadly rival, Shu Ba to find him.

As with many kung fu films from the 1970’s, the opening titles feature three of the stars performing different style routines and a short choreographed fight in an empty studio.

It’s not long before Sha Lei gets into a fight with a pair of street thugs. Although he is flexible and acrobatic, he is no match for the two tough guys. Chased into a derelict building, they stumble across a bushy eye-browed beggar, who happens to be a skilled fighter.

In a flashback we discover he is actually the highly skilled Master Lu Chin Fei, and see him fighting his sworn enemy Shu Ba. The fighting is performed surprisingly fluidly. He takes Sha Lei on as his student putting him through all sorts of arduous torture, including sitting on him whilst he lies on a bed of sharp spikes! It is not long before Sha Lei’s dopey brother is also roped into the training.

The legendary Yuen Siu Tien gets to demonstrate his dramatic skills

Our big red cock is a sure winner

There is the obligatory fight in a teahouse, that features an intricate bit of juggling with a china plate to bamboozle an opponent. When a fight breaks out after a, er…cock fight, we have a mix of Tom and Jerry style cartoon antics and the more familiar traditional choreography.

Yuen Siu-tien has little more than a guest-starring role, but he does get one of the best fights against the villains. There is no drunken fist but he still fights with the operatic fluidity that made him such a popular character.

The final training sequence evokes memories of Yuen Biao in the classic “Knockabout”. Our hero flips and performs jumping kicks over numerous flexible bamboo branches in a hugely impressive sequence with barely any edits.

The extended finale in the villain’s courtyard features Long Fist and Praying Mantis techniques thrown in with the usual flamboyant leaps, flips and rolls. The training with the bamboo branches pays off when Master Tang attacks Sha Lei with a long wooden pole. The fight leads to a final confrontation in the woods between the two brothers and the deadly Shu Ba. 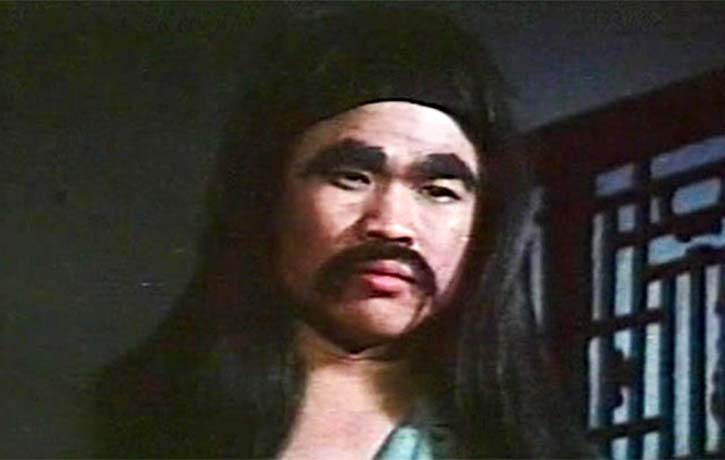 The mandatory bed of nails

Shes too cool for Kung Fu

The title and the casting of Yuen Siu-tien are a blatant attempt to cash in on the huge success of Jackie Chan’s “Drunken Master”. Yuen Siu-tien has a very small role, despite featuring on the DVD sleeve, and there is absolutely no drunken boxing whatsoever! This was obviously made on a shoestring budget, with the flimsiest outline of a story. I doubt there was even a script. The acting is appalling and the slapstick comedy fails most of the time.

However, in spite of this film’s numerous shortcomings, the martial arts performers are obviously highly skilled screen fighters. The many action sequences, although not as fluid as in the movies this one is obviously trying to emulate, frequently feature some slick moves or impressive Chinese opera-style acrobatics.

Fans of the badly dubbed, old-school “late night” kung fu films will love this movie. Despite its cartoonish elements, there is non-stop action from the first minute to the last. For the more juvenile, you will be laughing at the hilarious dubbed dialogue featuring classic lines such as “You killed my brother you bas*ard!” and “If you don’t want to die, give me the big red cock!”.

Do you remember “Drunken Master Strikes Back” from 42 years back…? Did you indulge in those “late night” kung fu screenings of the 1970’s and 1980’s? Which ones are your favourites and which other titles would you like us to feature? Let us know in the comments below; Like, share and join in the conversation on Facebook and follow us on Twitter & Instagram.

Whether you’re a Drunken Master or a Sober Student, get soaked in the spirit of the FU-niverse with these exclusive interviews, Top 5’s, Top 10’s, keep KFK’ing in the right gear, and subscribe for more classic kung fu on YouTube!)