After liking what he saw in Bruce Lee’s martial arts and director Chang Cheh’s films, Leung Kar Yan tried his hand at acting by visiting a film set at the Shaw Brothers Studios and asking for an audition. His good looks and acrobatic strength led him to a few supporting parts in the early 1970s, but it wasn’t until Sammo Hung discovered his amazing ability to mimic that he landed his first starring roles.

In 1978, Leung Kar Yan and Sammo Hung collaborated and starred in the brilliant kung fu movie Warriors Two. The name refers to the two martial artists in the movie. In it Leung plays Mr Tsan, an elderly doctor and master of Wing Chun. Leung could have easily convinced the audience that he was a Wing Chun master, and his impression of the wise and patient Mr Tsan is remarkable. The film is famous for its strict attention to real Wing Chun forms, which makes Leung’s mimicry of Wing Chun even more impressive.

After Warriors Two, Leung began to be offered larger roles. A great example of this is The Thundering Mantis (1979), where Leung plays a fishmonger who finds himself in trouble with the local gang. After defending a traveller and his grandson, the traveller offers to teach him “mantis style”. Leung brings a whole new meaning to the word ‘beserk’ in the final scene, where he witnesses the death of the grandson at the hands of the gang and kills them all. His wild, capering movements and impressive acrobatics see the film through to an astounding climax, one that will have any martial arts fanatic drooling!

Winding it up with full force 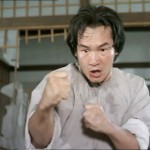 Surprise in store after a huge fight…

During this time, Leung began to work with Sammo Hung more, producing a series of martial arts films that blend comedy and action together. Examples of these are Knockabout (1979), Enter the Fat Dragon (1978) and The Victim (1980). Leung claimed that The Victim’s final scene was the hardest he ever had to do, as most of the acrobatics and kung fu were not doubled. Luckily, Leung’s character in The Victim also becomes tired throughout the battle, so at least he didn’t have to act that part!

However, many claim that Leung Kar Yan’s best work is Legend of a Fighter (1982), by director Yuen Woo-Ping. The film tells the tale of Fok Yun Gap, who is considered by his father to be too weak to be taught the family’s famous kung fu, and is taught in secret by his Japanese tutor, who later demands a fight to the death in the final showdown. Leung Kar Yan plays Fok Yun Gap when he is older, and delivers a well-rounded and serious performance of a son striving for his father’s acceptance and recognition through his martial arts practice, carried on in secret…

As the obsession with martial arts movies wound down in the 1980s, Leung Kar Yan tried his hand at directing. Unfortunately with the film industry having less of an appetite for martial arts films as there was in the 1970s, his films were not as well received. Leung Kar Yan still acts to this day, but has focused on less serious roles than those of his early acting career.

Legend of a Fighter trailer

Leung Kar Yan in The Victim

Leung Kar Yan in Legend of a Fighter

Honoured by his father in Legend of a Fighter 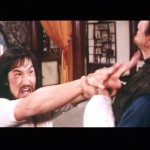 Duel snake thrust in The Victim

Although Emily had spent a year learning Shotokan Karate as a teenager, she spent three months at a martial arts school in the Fujian province of China and discovered her passion for kung fu! She practiced White Crane style, returning for a full year to learn Yang and Sun style Tai Chi as well as Ba Gua and Xing Yi Fist, Bai Ji Fist and weapon forms. Emily spends her free time perfecting her Tai Chi and hopes to teach it one day. Her favourite Kung Fu movie is The Grandmaster, but she also loves Kung Fu Panda, and has seen it more times than she would like to admit!