It’s been quite a while since we last visited Kumite, the clandestine, no-holds barred martial arts tournament where fighters compete for the title of the world’s mightiest warrior, first seen in the 1988 cult-classic “Bloodsport” starring Jean-Claude Van Damme. However, it’s once again time to fight to survive in, “Lady Bloodfight”, a female-driven reboot of the Kumite that, while stronger at the beginning and end than in its middle-section, emerges as a formidable contender.

Stuntwoman Amy Johnston portrays our heroine Jane Jones, an American martial artist on a quest to resolve some unfinished business after her late father’s disappearance and who finds herself competing in the underground world of the Kumite. Jenny Wu steps in the role of Ling Chow, a hot-tempered young woman who’s spoiling for a fight and finds one on the mat of the Kumite. Muriel Hoffman and Kathy Wu portray Jane and Ling’s respective mentors, Shu and Wai, two estranged sisters waging a proxy war via their two disciples. Both also face plenty of challenging adversaries in the tournament, including Jet Tranter as the free-spirited fighter Cassidy and Mayling Ng as the bloodthirsty Svietta.

Cassidy thinks Svietta ought to lighten up 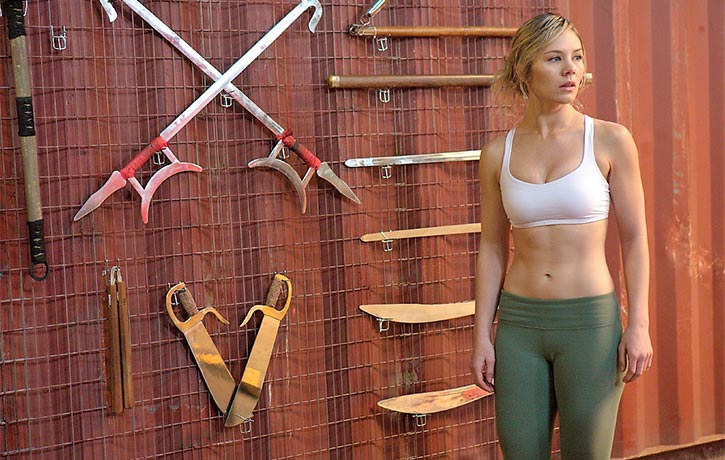 Jane selects her weapon of choice

In the underground martial arts tournament known as The Kumite, the two final competitors, Shu and Wai, who also happen to be sisters, are unable to overcome the other and their match is declared a draw. To settle to tie and distribute the prize money to a single victor, each is permitted to train a fighter to compete on their behalf at the next tournament.

Wai, who holds a bitter grudge against her sister and wants nothing more than to humiliate her in the tournament, selects Ling Chow, a hot-headed young thief not afraid to pick a fight with anyone. Meanwhile, Shu finds her own competitor in the form of American waitress Jane Jones, a young woman venturing into the underbelly of Hong Kong to uncover the truth of what became of her father – he disappeared after competing in The Kumite years ago. As the tournament begins, Jane soon learns there’s much more to what became of her father than she realized.

Jane learns the importance of balance for The Kumite

If you were holding any doubts going into “Lady Bloodfight” that the film might somehow fail to live up to its title, guess again. “Lady Bloodfight” pretty well lives up to its namesake before the Kumite even gets started. Jane literally fights off the advances of some unruly customers at her waitressing job, followed by some up-close glimpses of the half-dozen softball-sized contusions she acquires from the exchange a few minutes later.

You can see how well the film builds up to its Kumite from the first appearance of Ling’s character. Strolling into Wai’s school like a Goth version of Chun Li, she absolutely relishes the opportunity to flatten her enemies, and while her early scenes will leave many viewers expecting her to emerge as the ‘Chong Li’ of this Kumite, we soon learn that Ling simply carries a lot of misplaced anger and ambition. The honor of this tournament’s Chong Li decidedly goes to Svietta, but even amidst Ling’s sneering and unhindered aggression towards her fellow competitors, she proves in her own way to be almost as much of a protagonist as Jane.

Shu once competed in The Kumite herself

Talk to the hand Ling

While the film’s rendition of The Kumite is by no means a let-down, it takes a little longer to find its footing compared to Jane and Ling’s training leading up to it. That does mostly come down to how well the film presents their respective training, be it Jane perfecting her balance in a shallow pool or Ling flirting with random men on the street to provoke their significant others into a fight, and just how infrequently we get to see the hero(ine) and would-be villain(ess) partake in the master-student relationship side-by-side.

Nevertheless, The Kumite really kicks into high gear when Svietta begins to cut loose in the second day of the tournament. She’s every bit as ruthless and sadistic as Chong Li ever was, and indeed, makes a bid to outdo him for sheer cruelty with the cold-blooded murder she commits purely to spite Jane, giving way to the most brutal match-up of the film when Jane steps into the ring for some payback. At least, until Jane and Ling face off in the final match, with Jane badly wounded from her fight with Svietta and blood pouring from every facial orifice, and neither fighter willing to back down.

Jane arrives in Hong Kong to search for The Kumite

Jane prepares to cut down her foe

Jane is focused on the battle ahead

Jane rallies to overcome her opponent

Jane trains diligently for The Kumite

While “Bloodsport” ended on the note of conquering hero overcoming a vicious tyrant, “Lady Bloodfight” manages to bring The Kumite to its own triumphant conclusion that brings the conflict of its four leading ladies full circle amid some suitably brutal butt-kicking.

Not many people get this message in the mail

Jane is ready for anything

While its beginning and end are stronger than its midsection, “Lady Bloodfight” is great fun and a worthy homage to the original. Amy Johnston and Jenny Wu each carry the movie and their fight sequences with grace and strength and the film pulls a real bait-and-switch with who you expect to be the murderous villain of The Kumite. Even without one of our leads casually meditating in a full split every five minutes, “Lady Bloodfight” holds its own on the mat without ever saying “matte”!