Stuntman and actor Stefan Morawietz stars as the titular “Jack Walker”, a washed-up action movie star. Stefan has featured in numerous Chinese TV series, movies and commercials, as well as international films, including “Sky Sharks”, “The Legend of Huo Yuanjia” and as the villain Twister’s coach in “Ip Man 2”. Stefan recently returned to his home country of Germany and is currently a successful personal trainer and fitness blogger.

Starring as the slightly unhinged gang boss and Jack Walker fan is actor and stand-up comedian Denis Lyons as “Alexej”. Playing a glamorous actress “Sylvia Meadows” is the glamorous actress Kathrin Höhne! She has previously featured alongside Don “The Dragon” Wilson in “The Hitman Agency”.

Physics-defying action performer Mike Moeller appears as stuntman “Daniel”. Having gotten his big break working with Donnie Yen on the German action series “Der Puma”, he has gone on to appear or perform stunts in movies such as “Resident Evil”, “Half Past Dead”, “Speed Racer”, “Inglourious Basterds”, “The Eagle”, “The Three Musketeers”, “Cloud Atlas”, “Hitman: Agent 47”, “Pound of Flesh”, “Ultimate Justice”, “One Million K(l)icks”, “Plan B”, and many more. 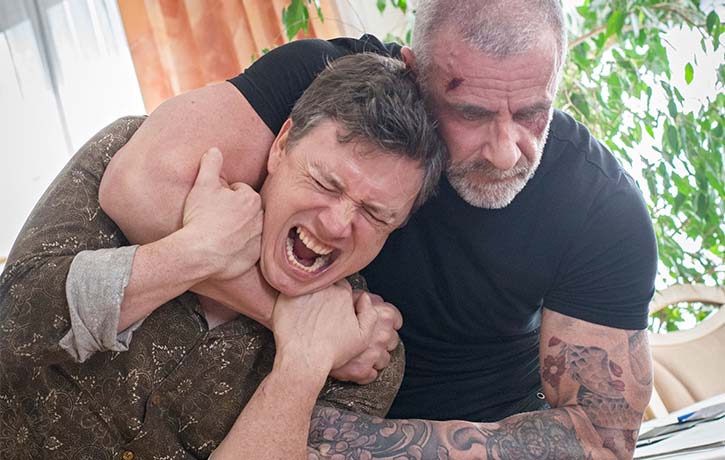 Once Jack Walker was Germany’s greatest action star, the hero of countless Germanic martial arts and action adventures. While the millennium has changed, he hasn’t.

The studios no longer answer his calls, while he avoids calls from the people he owes money to, Jack is about to hit rock bottom when he is offered his final chance for a comeback. With his debts mounting and no better offer on the table, Jack reluctantly agrees to star in a low-budget action film.

What starts out as a low-budget, no-name C-movie becomes a game of life and death. When the crew is taken hostage by a gang of ruthless drug runners, it is up to Jack and the stunt team to fight their way out for real!

Alexej wants a chance to beat the aging star

Literally blocking out a fight scene

Walker will have to draw upon all of his action-movie expertise to try and keep himself and the crew safe, and maybe this time, just for once, Jack Walker can save the day for real, and become the hero he’s always wanted to be!

A Bar Brawl Sets the Scene

An intriguing opening in a bar sees a couple of middle-aged men, who think nothing of gulping down half a bottle of whisky in one go, go toe-to-toe in a well-choreographed-but-sluggish fight.

There is a reason this fight sequence is a little sloppy though; it is a scene from an old Jack Walker movie! Cut to Mike Moeller and his team training and we get to see some truly astounding, wire-free, gravity-defying skills, giving us a taste of what is to come.

Can Jack become the hero he always wanted to be

When Walker joins the low budget film, pretty soon all the stunts go hilariously wrong. If you are of a certain generation, imagine The Fast Show’s Chip Cobb on steroids!

Things take a sinister turn for the would-be movie makers when a gang of real bad guys turn up. Stunt coordinator Chris and Jack Walker must team up to take on the villains and save the film crew.

There are some funny and impressive stunts as they encounter the various henchmen. Some are bounced down staircases, whilst others are taken out by flying fire extinguishers!

With the head bad guy Alexej being a huge Jack Walker fan, our hero is forced into fighting for his gang’s amusement. Wanting to massage his own ego, Alexej even has a go at beating the aging action star.

For the final act, the fight sequences are massively turbo-charged as Mike Moeller and his team of stunt performers take on the various henchmen. Stick around for the outtakes during the end credits!

Our hero is forced into fighting for the gangs amusement

Although this is a low-budget film within a low budget film, it is very well-filmed. Stefan Morawietz is hilarious but also puts in a decent dramatic performance as Jack Walker.

Although funny in places, I did find things a little slow between the comic or action sequences. The choreography when Mike Moeller is onscreen is genuinely astonishing, and he is up there with the best of the current generation of movie martial artists. It’s a shame he didn’t feature more.

The rest of the fight sequences, although occasionally slick, look like a collection of scenes filmed for a show reel.

As a calling card for the respective talents involved with this movie, I hope they get a chance to flash up more of their skills in bigger productions in the future.

All in all this is an easily-digested slice of humorous, hyper-kinetic action! 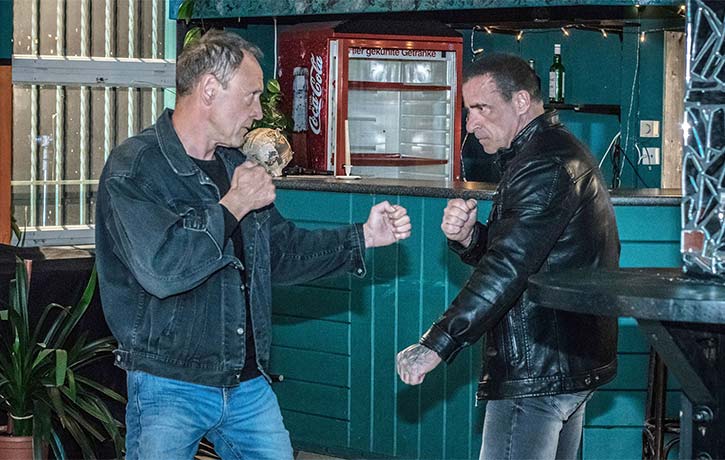 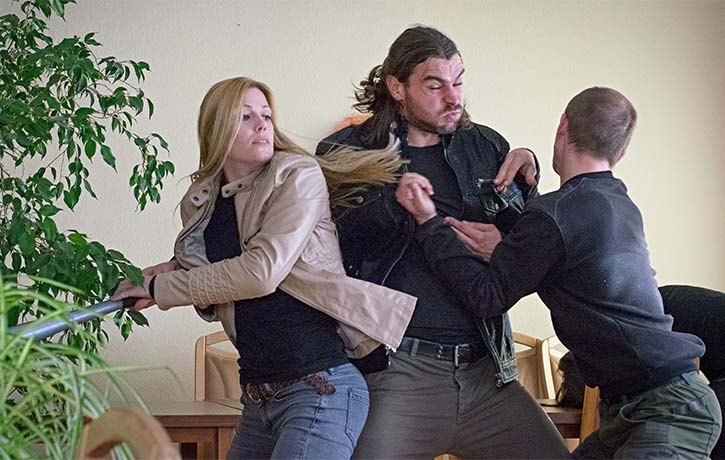 Taking out the gang one by one

I spy with my little eye… Jack Walker

Real villains take over the film

JACK WALKER is out 3rd May, 2021, on all major digital platforms, courtesy of Evolutionary Films!

So you’ve heard of “Johnnie Walker”…time to get DRUNK on MARTIAL-ARTS MAYHEM in the FUNIVERSE of these Top 10’s, Top 5’s, deep-dive interviews, develop your unpredictable shapes and styles in KFK WEAR, and subscribe for more kinetic FU on YouTube!