In 2015’s hit biopic “Straight Outta Compton”, R. Marcos Taylor stepped into the role of the fearsome hip-hop record producer Suge Knight, along with reprising the role in “Surviving Compton: Dre, Suge, and Michel’le”. While Marcos’ performance in the film garnered him significant critical acclaim, what many did not realize is that Marcos is also a veteran stuntman and highly skilled martial artist!

Having lent his talents to everything from “Luke Cage” and “The Martial Arts Kid” to “Baby Driver” and “Teenage Mutant Ninja Turtles”, Marcos has never shied away from diving headfirst into stunt work and action, with a level of agility and speed that defies a man of his large stature.

Today, Marcos, sits down with KFK to share some behind-the-scenes peeks on his appearance in the upcoming martial arts spoof comedy “Fury of the Fist and the Golden Fleece”, along with some stories about his life in both martial arts and stunt work.

Hi Marcos, thank you so much for the pleasure of this interview today. Hope you’re doing good?

Nice! Have you taken a look at our site recently, what do you think of the name Kung Fu Kingdom (KFK)?

Glad to hear that. Now let’s kick this off with how you first got started in martial arts? How old were you and what different arts have you studied and trained?

I first started in martial arts when I was 5 years-old, and as soon as I started, I just learned everything I could – I’ve done Ninjutsu, Shotokan, Taekwondo, Muay Thai, Wing Chun, Wushu, Hung Gar, Sambo, and Hapkido. I’ve had such a love of martial arts since I was young, and it’s impossible for me to ever get bored with it.

Oh, there’s too many for me to name! Don “The Dragon” Wilson would definitely be one. He was such a legend of kickboxing, and since I fought professionally as well, he was a real inspiration for me. I was also a really big fan of the Five Deadly Venoms and Gordon Liu as a kid too, I learned a lot of martial arts by studying them on TV. Some of my other big heroes in martial arts are Sho Kosugi, Richard Norton, Cynthia Rothrock, Wesley Snipes, Michael Jai White, and of course, Bruce Lee!

Some amazing martial artists there! So, how did you first get started with “Fury of the Fist”?

Well, the stunt coordinator, Peter Antico, is like one of my big brothers in the industry. It was right after I finished “Straight Outta Compton”; Pete contacted me and told me about “Fury of the Fist”. He told me about the film and everyone else involved, and asked if I wanted to come aboard, and there were so many people in the film that I grew up emulating, so I was just like, “Are you kidding me? Sure!” 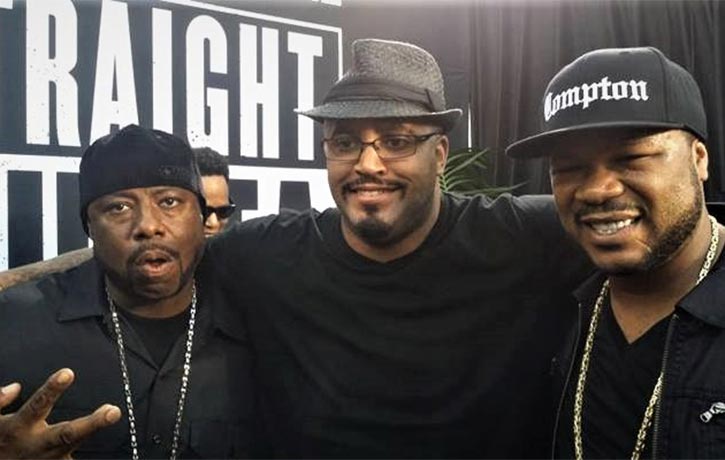 “Fury of the Fist” boasts its huge ensemble cast, including Gene Lebell, Gokor Chivichyan, Danny Trejo, Bill Goldberg, Bianca Van Damme, Michael Dudikoff, Don Frye, of course, Cynthia Rothrock and Don “The Dragon” Wilson, Taimak, and many more. How was the experience of making the film alongside such a legendary band of martial arts masters?

It was awesome! There were so many people in the film that I watched as a kid and stole all their moves. And I love doing action, so making “Fury of the Fist” was like getting paid to go to Comic-Con! Meeting Michael Dudikoff for the first time was amazing, and I love all of the “American Ninja” movies, so we got to talk for hours about those. Don Frye, I’ve worked with before, but I had to bow to him because of how much he’s done for the sport of MMA, and he’s one of the hardest hitters you could ever meet!

No doubt about it. You also appear in the film alongside screenwriter Sean Stone. What can you share about working alongside Sean on the film?

Sean is honestly the coolest, calmest person you could work with. There’s never any stress or bad situations with him. I really dug his vibe, and he was really open to everyone’s input. I hope I get to work with him again soon!

What were some of the more memorable experiences for you in making the film?

Definitely doing my fight scene with Bianca and Sean, and just meeting so many of my heroes as a kid. They also fed us a lot of lines that had everybody cracking-up as we were trying to say them on camera!

Did you experience any accidents or mishaps?

No, no accidents. I started out in stunts, so I have really good control, and it was like a family set, everyone was really professional. I can’t think of anything negative from making “Fury of the Fist” at all.

Cool! To tie in with that, what’s the most daring stunt you’ve ever done, what’s been your most serious injury and how did you get around it?

I’ve done a lot of really daring stunts. I’ve fallen off buildings, been thrown out of windows, thrown out of cars, down stairs, but I think probably the most daring stunt I’ve ever done was getting hit by a truck. It’s interesting going from a stunt background to being an actor, because I really love doing action, and I’m always like “I’ll do that really dangerous stunt”, but now, people want me to back off and let the stunt guys take that now.

As far as injuries, probably my worst one was when I tore my meniscus on a movie. I was doing a jump spinning-heel kick, and the opponent came too close, so I had to re-chamber my leg and fell, and that tore my meniscus. I still finished the movie, because I didn’t want them to have to shut the film down, but I had to take it easy for a little while after that while it healed.

Glad you recovered well from that. So, what other projects do you have in the works after the release of “Fury of the Fist”?

I just did a series on YouTube Red called “Step Up: High Water”, that’s part of the “Step Up” franchise. I also have “Paying Mr. McGetty” coming out in May, and I have a few other projects coming up that I’m excited for, that I can’t talk about yet or I’ll get fired!

Look forward to seeing those. On that note, what are three of Marcos’ top martial arts / kung-fu movies?

As a kid, I loved anything with The Venoms, and everything Jackie Chan‘s done, and for stuff that’s out now, I really like the “Undisputed” movies with Scott Adkins.

Second those! You’re known for being able to move fast for someone of your large stature, what’s a typical workout for you these days? What are some of your favourite exercises, and what would you recommend for bigger-framed people who want to get into martial arts?

I think a lot of it comes down to just training consistently. Right now, I’m about 260lbs (118kg), but I weighed 360lbs (163kg), at my heaviest, and I was still able to move really well by just being consistent. Stretching is also really important, and drilling. When I was a kid, I also would put in a movie and do the choreography from the film. I still do that a lot today, I’m a big kid!

I’m sure all reading this can relate to both! If you could be a superhero, who would you be and what superpower would you most like to have?

I really wanted to be Superman when I was a kid, so definitely flight. I’d also love to be able to regenerate like Wolverine, so it’d be a choice between flight and regeneration.

Great choices. Well, as we sign off here, what message would you like to share with Kung Fu Kingdom readers and those who know you around the world right now?

I just want to thank everyone for supporting my career. I still think of myself as a beginner, and I’m ready to do a lot of great projects, and I hope everyone enjoys it, because I’m going to perform to the best of my ability and then some!

He wanted to be superman

Marcos at the premiere of Edgar Wrights Baby Driver

Marcos hangs out with a few of his many friends

Marcos heads to the set

Marcos prepares for the next action scene

Nice way to ahem…rap (up)! Massive thanks for your time today, Marcos. Best of luck with “Fury of the Fist” and we’re looking forward to everything you have coming up in the soon future!

Thanks Brad, glad to share everything here today with Kung Fu Kingdom!

“Fury of the Fist and the Golden Fleece” is set to release on May 25th. What are some of your favourite ‘Kung Fu Komedies’? Let us know in the comments below, share and join in the conversation on Facebook and follow us on Twitter and be sure to check out KFK’s other exclusive interviews!!