The handsome and popular Canadian singer, rapper, dancer, composer, record producer, actor, and entertainer, Henry Lau stars as “Dong Yilong”. Mostly active in South Korea he is widely known as a Chinese member of boy band Super Junior-M (“Super Junior Mandarin”). A classically trained musician, Lau is from Toronto, Canada, and his native/first language is English, but he is also fluent in Mandarin and Korean.

Taiwanese-American singer, actor and model Peter Ho plays “Chu Hun”. Ho has starred in over 25 films and television series, including the “Crouching Tiger, Hidden Dragon” television series, and movies such as “Once Upon a Time in Tibet”, “The Monkey King” and “Sword Master”.

Dong Yilong a valiant young villager volunteers for the challenge

This film adaptation of a popular online game is set in an ancient fantasy world of swords and sorcery, with a re-imagined version of ancient China divided into the warring regions of Northern Yan and Southern Zhao.

Following an assassination attempt on the young Southern King, the scheming Guan Taishi resurrects a contest to elect a new grand field martial, who will help restore order to the region. Each of the eight clans is to send three contenders to compete in a series of deadly gladiatorial contests in Phoenix City.

Hearing the news, Dong Yilong, a valiant young villager volunteers to take up the challenge despite the reservations of his village. His dangerous journey is paved with many hazards, but along the way he encounters a disgraced, weary warrior Chu Hun, and a feisty fighter and talented pickpocket, Jinggang, who are also hoping to compete at the warlord’s tournament.

They soon come to realise that if they have any chance of survival, it is better to work with each other, than against each other. However, one of them has a secret motive for entering the contest.

Off the bat this film lays down its hand as to the type of spectacular visuals and action the audience can expect. In a sweeping desert landscape Chu Hun fights off two giant CGI scorpions using his wushu pole skills. 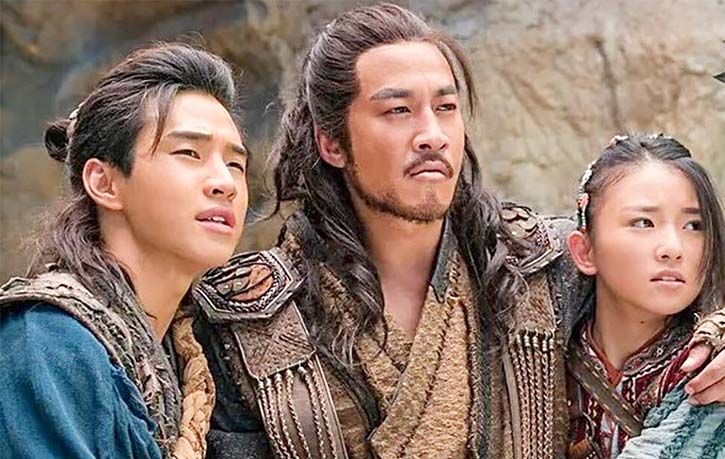 Three is the magic number

The special effects are impressive and yet another indication that big budget movies (by Chinese standards) are nipping at the heels of the best Hollywood computer-enhanced action. The martial arts choreography itself features lots of stylish twirling and spinning of weapons, and is beautifully filmed. It is testimony to the quality of the screen fighting, especially when Jiang Luxia enters the fray, that the blockbusting visuals do not detract from the martial arts on display.

That being said, this IS a fantasy film, and of course there is a good deal of physics-defying flying around. However, just like a film such as “The Matrix”, it is not out of context and there are plenty of recognisable kung fu skills and techniques to keep things entertaining. The huge set-piece gladiatorial battle between the three clans on a giant bed of metal chains is a particularly astonishing feat of slick choreography and visual effects.

A more grounded fight in the alleyways of Phoenix City with less reliance on wires and CGI enhancement allows the cast to demonstrate more authentic-looking fighting techniques and traditional choreography. It is a reminder that decent action doesn’t always need the majority of the budget being spent on visual effects. A fight in a forest (not a bamboo one for a change) also features much more traditional swords and spears choreography.

Better to work together than against each other 1

A reflective moment for Dong

In a tense chase with our heroes being pursued by an enormous serpent-like dragon (or is it a dragon-like serpent?) and a finale featuring a giant CGI lion/bear beast, the grand budget and big screen sensibilities of this film are fully pressed home. Even so, the martial arts action still entertains, including a particularly thrilling duel that takes place in the air above on a hang glider!

Stick around during the credits for a little “Easter egg” (literally!).

Like so many blockbusting movies in 2020, the worldwide Covid-19 pandemic saw “Double World” being pulled from cinemas as theatres in China and the rest of the world were closed.

In the summer, producers took the decision to cut any losses and exclusively stream their film on iQIYI in China, and internationally on Netflix. This makes “Double World” the first Chinese language film to be streamed locally and internationally at the same time.

It’s a shame as this is a film that deserves to be seen on a giant IMAX screen. It truly is a visual feast of stunning fantasy action sequences, with beautiful locations and sets (both real and computer-generated), all presented with some breathtaking cinematography.

The special effects are impressive

Despite featuring plenty of spectacular set pieces, this still felt like a long film at just under two hours. The dramatic scenes and exposition that intersperse the more exciting ones simply weren’t that interesting for the most part. However, when the action is on display, it is very entertaining. Having been based on an online game, the martial arts choreography is more in tune with a videogame like Soulcalibur than “real” fighting, but still features plenty of cool moves and techniques.

Fans of Asian fantasy adventures such as the “Detective Dee” movies, “The Great Wall” or “Thousand Faces of Dunjia”, should enjoy this visually sumptuous blockbusting epic!

Double World is available on Netflix

DOUBLE WORLD can be seen on Netflix now!

MAKE YOUR WORLD MULTIDIMENSIONAL by entering the parallel FU-niverse of these Top 5’s, Top 10’s, deep-dive interviews, get your wu shoes & magical manoeuvres on in KFK gear and subscribe for all manner of 3D-fight action coming to life on YouTube!