Home » Articles » MMA: Henry Cejudo vs Demetrious Johnson — Who is the Flyweight King?

Henry ‘The Messenger’ Cejudo and Demetrious ‘Mighty Mouse’ Johnson, are not only two fierce warriors who have contended for UFC gold, they’ve also persevered tremendously in securing their names and legacies in the world of mixed martial arts.

Their athletic prowess, skill, and talent have long been discussed, to the point where one may say that Cejudo’s elite wrestling background and UFC 227 split-decision win over ‘Mighty Mouse’ should entitle him to the flyweight king’s crown. However, both have a win over one another making that a stalemate.

If you’re new to the mixed martial arts scene and don’t know much about who or what we’re talking about, don’t worry as we’ll explain what you need to know about these two elite athletes.

So, taking into account their achievements inside and outside of mixed martial arts, let’s analytically breakdown the skills of these stellar combatants and once all is said and done, you can decide for yourself who the true Flyweight King really is!

Henry Carlos Cejudo, nicknamed ‘The Messenger’, has been professionally competing in mixed martial arts since 2013 announcing his transition to an MMA career via Twitter.

His nickname stems from his motives entering the octagon where money, fame, and status are considered unnecessary to the former flyweight and bantamweight champ. Instead, Cejudo views the UFC and a world title as a platform for something greater; ergo the name, ‘The Messenger’.

As former UFC Flyweight and UFC Bantamweight Champion, Cejudo is the fourth fighter to hold two different weight division belts simultaneously, and subsequently the second person to defend titles in two different weight classes. Prior to entering the UFC, he won an Olympic gold medal in freestyle wrestling, a Pan American Games gold medal, and has represented the USA twice on an international level.

His last bout was on May 9, 2020 where he fought Dominick Cruz to successfully defend his UFC Bantamweight title through a second round knockout.

Taking into account his feats in martial arts and wrestling, Cejudo has been widely acknowledged as the greatest combat athlete of all time. However, should he be on the all-time ‘MMA Greats’ list – what do you think? However, before you make your decision, don’t knock out Demetrious Johnson’s accomplishments quite yet as he may sway -if not stun- you into changing your mind!

Demetrious Khrisna Johnson, nicknamed ‘Mighty Mouse’, has competed in MMA since 2007 where he would win his first mixed martial arts bout with a well-timed, savage head kick.

This ties in with his nickname ‘Mighty Mouse’, which was coined due to Johnson’s small stature, but size-belying fighting spirit. He formally used to compete first in the bantamweight division where he would encounter considerable physical disadvantages concerning height and reach. However, this did not deter the American as his perseverance in the bantamweight and flyweight classes are testament to his determination and skills in overcoming adversity – a ‘Mighty Mouse’ indeed.

Johnson, 34, is an American mixed martial artist, born in Madisonville, Kentucky and fighting out of Parkland, Washington.

He is popularly recognized for utilizing rapid and clinical striking with elusive movements in his bouts. Further, the MMA veteran has landed the most takedowns in UFC Flyweight history co-holding the record for the latest finish in UFC history with a submission win over Kyoji Horiguchi with one second to go in the fifth round. 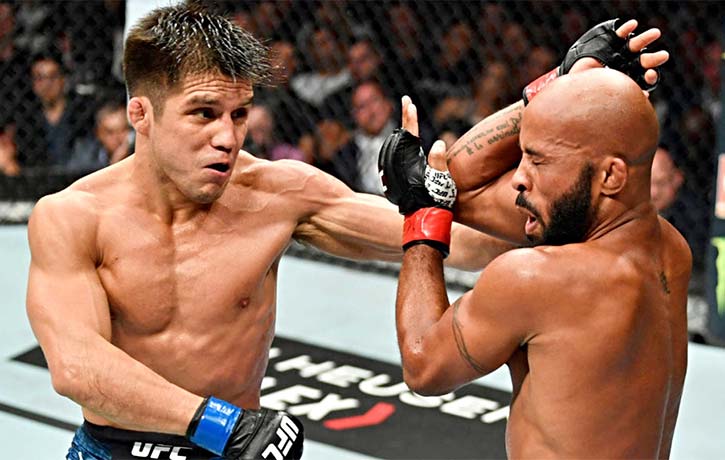 His records don’t stop there however, he is also the only fighter to have over 10 takedowns in 3 different fights and holds the most such finishes in UFC Flyweight history with 7 on record. Before starting his career in MMA, Johnson’s athletic prowess was clear as he was a stand-out competitor during his junior and senior years in wrestling, track, and cross country. He even participated at State Championships for track and cross-country, showing that his cardiovascular capacity placed him in an elite class of athlete.

Currently, he is the former UFC Flyweight champion and now competes for ONE Championship after a one-time trade deal with the UFC for former welterweight contender Ben Askren. Johnson is also the reigning undisputed ONE Championship Flyweight Grand Prix champion.

According to Entertainment and Sports Programming Network (ESPN), MMA Weekly, and various UFC employees, Johnson has been praised as being one of the greatest mixed martial artists in the world. That’s difficult to contest as he is ranked by Sherdog as the no.9-pound-for-pound fighter in MMA and as the no.2 ranked Flyweight. With remarkable wins over the likes of Joseph Benavidez twice, John Dodson twice, Kyoji Horiguchi, Miguel Torres, Norifumi Yamamoto, and the one and only, Henry Cejudo, it is tough to say unequivocally who is better between the two.

Having given the lowdown on these two fierce fighters, we’ll now go through their previous bouts and break down how we think each athlete performed, respectively. As our dedicated, martial art-loving followers, feel free to cast your vote in the comments below or on KFK social media to decide who is the undisputed ‘Flyweight King’!

Breaking down this match, both fighters were engaging but who won was clear and it was an explicit display of fight IQ by Johnson whilst overwhelming Cejudo with punishing combinations.

A 29 year-old Cejudo attempted to use wrestling to his advantage but this proved to no avail as Johnson was just too difficult to get a hold of.

Every time he would step off, Johnson would fire in with a barrage of punches from different angles creating frustration and pressure from multiple directions. However, it would pay off in the earlier part of round 1 by taking down ‘Mighty Mouse’ but ‘The Messenger’ was not able to send Johnson off with a loss this night.

He would be pushed off immediately as Johnson got to his feet showing his fighting spirit on stage by clinching Cejudo up – Muay Thai style. At this point, Cejudo was hurt, having taken powerful shots to the head, and knees to the body, which had exhausted and worn him down.

A strategic right knee to the body and left knee to the head seals the deal as ‘The Messenger’ stumbles back trying to regain composure but is soon met with a straight left, then a knee to the body. A short ground and pound finishes the match with Johnson arising the victor.

In this bout particularly, Cejudo was outmatched as he faced a fearless and dynamic Johnson who applied pressure right until the end. It was a resounding win for Johnson this time, but their next meeting would play out differently.

After two years of working away to get another title shot, Cejudo finally met with the reigning champ again. This time, their fight would be approached differently as ‘The Messenger’ would take his time, be patient and rack up points between each subsequent round.

From the first round, Cejudo rolled over his left foot and it became an apparent issue during the rounds. However, he overcame adversity and stuck with the game plan. Even though he was more static than Johnson, Cejudo effectively used timing, feints, and counter takedowns to rack up more points on the scorecards.

‘The Messenger’ was able to take Johnson down three times but did not damage him too much when he was taken to the ground. Moreover, ‘Mighty Mouse’ chipped away at Cejudo’s leg endurance and kept on using low kicks to break him down – however, Cejudo maintained distance and kept on guard for any in-rushing combinations.

At one point, ‘The Messenger’ countered a low kick with a straight right which knocked Johnson off balance, but the former champ was back to his feet in less than a second. Here, Cejudo’s efforts were enough for him to edge a unanimous victory over ‘Mighty Mouse’ declaring the former Olympic gold medalist the winner.

Should There Be a Third Fight?

Even though Cejudo won the last bout, the debate as to who is the Flyweight King is still up in the air as, on paper, Johnson did lose but he still managed to get ‘The Messenger’ in trouble a couple of times during their last match up.

It’s perhaps not the fairest representation of the two showcasing their skills at their finest as we are now drawn to the hypothetical questions of ‘What if? What could? What should happen?’. Therefore, due to the visible lack of clarity on who is the true ‘Flyweight King’, a third bout should be arranged with regards to testing both fighters’ ability in the cage since one had time to build up his skill set to get back into title shot contention.

The other was traded off before he could make that chance become a reality. We feel like it would only be fair to set these two up again and go for gold in the cage but with both now in different organizations, it’s wishful thinking for the most part, but then again, in the MMA world let’s face it, anything can still happen! 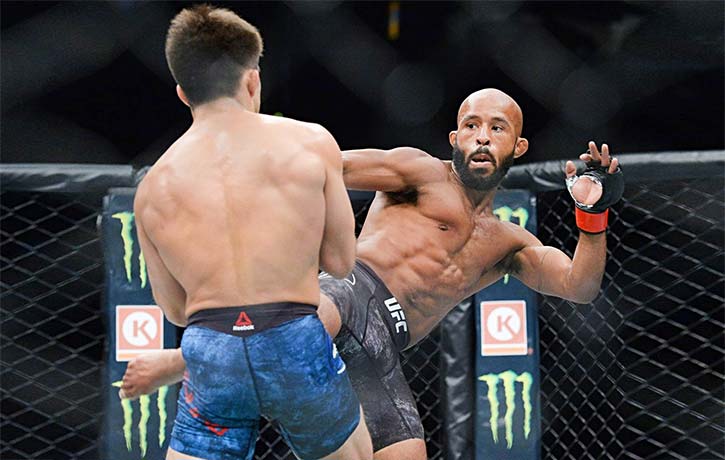 Mighty Mouse lays the kicking pressure on The Messenger

So, there we have it folks; an overview of two of the greatest Flyweight champions to grace the mixed martial arts stage. Who is the champ in your eyes? Who do find convincingly better out of the two, and what’s your most memorable Demetrious Johnson or Henry Cejudo fight moment?

Okay, so you can’t shoot ‘THE MESSENGER’ and you can’t catch ‘MIGHTY MOUSE’ but YOU CAN enter the FUniverse for more MMA with: KFK’s interview with ONE’s new Featherweight World Champion, Thanh Le, Jorge Masvidal: Inside the Mind of a Real-Life Street Fighter, Khabib Nurmagomedov: Inside the Mind of the Russian Eagle, and many more in our Top 5 MMA series.

WANT MORE? Then why not get to grips with these Top 10’s, make YOUR MESSAGE statement heard in KFK fight gear and subscribe for more MIGHTY action on YouTube!

Paul is an MMA enthusiast and practitioner and his passion comes from the moral teachings and physical benefits associated with martial arts. Paul is a massive fan of combat sports, especially with how the sport is constantly evolving. Paul himself has trained in boxing for a couple of years and also trains in Brazilian Jiu jitsu but mainly focuses on traditional western boxing. He follows all sorts of martial arts promotions including the UFC, Bellator, Glory, One Championship, and World Series of Fighting.