From the great director of “Hero” and “House of Flying Daggers”, Zhang Yimou, “Curse of the Golden Flower” takes us back to the 10th Century Tang dynasty China -it’s based on Cao Yu’s 1934 play, ‘Thunderstorm’, which is set in a modern world China.

A story of betrayal, revenge and conspiracy, “Curse of the Golden Flower” does not disappoint as Yimou’s 2006 multiple award winning masterpiece. Snatching up awards for Best Actress, Best Art Direction, Best Costume and Make up AND Best Original Film Song, “Chrysantheum Terrace” by Jay Chou.

Chow Yun Fat steps up to the menacing role as Emperor Ping, a controlling force in the lives of everyone in the palace especially that of Empress Phoenix, played by Gong Li, who bagged herself a Best Actress award for the role. Our youngest Prince, Prince Yu, is brought to life by Junjie Qin. Alongside him we have Liu Ye taking on the role of the Crown Prince Wan, step son and ex lover to the Empress Phoenix.

Returning from the frontier, Prince Jai played by Jay Chou, a multi-talented musician who’s toured the world. Joining the imperial family, we have the Imperial Doctor, portrayed by Dahong Ni, his daughter Chan Li represented by Man Li, and Chen Jinas the wronged first wife of the Emperor, though she’s now married to the Imperial Doctor, who has no idea of her past relationships.

The Emperor is returning with his son Prince Jai, from a long absence in the frontier but as preparations begin, His majesty’s return festival is suddenly cancelled, sending shock through the palace as we see the Empress Phoenix looking panicked and confused upon hearing this. Immediately there is a sense of something gone wrong. The Emperor stoically reveals his cold side, no emotion to his family, especially towards his Empress whom he seems suspicious of. 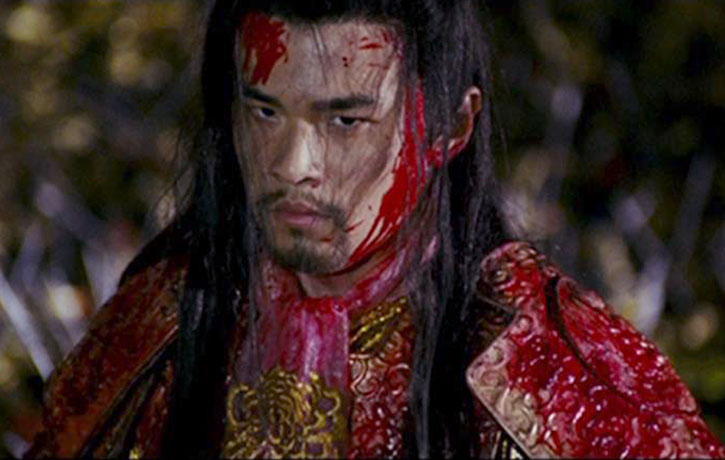 Jai refuses to give up

The emperor at the head of the famlily table

We later begin to get a fuller picture that all is not as it seems, as a secret ingredient in the ‘medicine’ prescribed to the Empress reveals the Emperor’s true intentions for his return: revenge. The Empress has a plan and takes matters into her own hands, enlisting the help of her son Prince Jai, which eventually leads to a showdown to see who will take the throne.

We’re brought back to Ancient China in this beautifully directed story of manipulation and power struggles of epic proportions; mix that up with some conspiracy and a whole lot of back stabbing, literally and figuratively and you’re left with a dangerous combination about to erupt at any moment. And it really does erupt. Our first taste of action is when the welcome home celebrations are cancelled, we are taken to a scene at an inn where The Emperor and Prince Jai end up engaging in a father vs son sword fight.

The Emperor flings a sword from his bodyguard’s sheath and it floats gracefully through the air, until the Prince impressively catches it and from there, it’s on! Sparks fly and so does Prince Jai at one point. An intense battle ensues, the Emperor, still seated for most of the encounter, looks like he can still hold his own. Jai doesn’t relent, their armour clashes and for a moment, the Emperor looks almost defeated. Though he uses his years of experience to deflect and parry, leaving Jai unarmed, he actually yields.

A father and son sparring conest

Soldiers fall in an epic battle

This scene is an attention grabber with the sound of blades clanging together along with the perfectly choreographed movements, to the point where you wonder if they’re not taking themselves and the bout too seriously.

In the action stakes, the film doesn’t disappoint, for example, in the brief scrap between the Crown Prince and the mysterious masked assailant; we see the Prince being toyed with as the dark clothed intruder dodges his attempts to reveal his identity. As the film progresses however, things get much darker and the action, bloodier. We see the use of many different types of weaponry too, from custom made lightweight military swords covered in gold and precious gems, sickle style throwing hooks that slice everything in their path, giant pikes, classic old-school bows and arrows and even sharpened hair pins at one point.

Each action scene is beautifully choreographed, while an underlying brooding, violent ambiance persists. As the plots unveil and the rebellion begins, brace yourself for more twists and turns than the iconic Brands Hatch! Assassinations, carried out by the Emperor’s personal army of ruthless ninjas, are brutal every time showing just how loyal they are to him and at his defence wherever he goes.

Wan being made a fool of trying to reveal the intruder

Sparks fly as a father tests his son

A bloodied Jai wonders if it was all worth it

Two grams a day over a few months..

A branded woman connected to the emperors past..

Assasins try to take out Chan

The end battle is pretty spectacular, using more than a thousand real soldiers, Yimou has created a beautiful, flowing poetic battle in motion. It took some twenty days to shoot it, a sign of dedication from everyone involved to get the scene right. Soon after the final battle begins, the story comes to a close. Emotions run at fever pitch, family members turn on one another as they battle for control. Who will emerge and take the throne for themselves?

“Curse of the Golden Flower” takes you into to a familiar place of ‘fighting the system’, and the power struggle that ensues when a rebellion is brewing. It’s almost like a chess game, with each character trying to make their move to wipe out the opposition, only to face obstacle after obstacle. Chow Yun Fat playing the devious role of the Emperor, with his steely demeanour throughout gives you the chills as he callously abuses his control of the palace until his past catches up to him and sets to ruin everything he’s worked for. Li Gong plays the role of the Empress in such a way that you can’t help but support her cause, despite her treasonous past transgressions. With a highly charged and complex emotive story packed to the gills with betrayal, treachery, blood and plenty of beautiful costumes, “Curse of the Golden Flower” is a stunning piece of must see cinema.

Jai feels untouchable despite being outnumbered

A plot is revealed in a recipe to the medicine

The golden army advances on the palace

Originally from Northern Ireland, Neal's interest in martial arts has become obsessive. He was introduced from a young age to the films of Bruce Lee, Jackie Chan and even Rutger Hauer in ‘Blind Fury’. He became fascinated by the techniques each film contained, the discipline involved and the ability displayed. It was always his dream to write about something he loves and appreciates now being able to do so. In his spare time he enjoys training in BJJ. He looks to daily further his knowledge of the martial arts, whether training in different disciplines or from old friends demonstrating proven, hard-earned techniques. Ultimately, he senses he is on his journey to know what it takes to be a true Martial Artist.