I’m going to open this review with the declaration that I can say, with one hundred and fifty percent certainty, that Jason Momoa is going to absolutely slaughter the role of Aquaman in next year’s “Justice League”. How do I know this, you may ask?

Well, let’s put aside what we have seen of Aquaman so far from his brief cameo in “Batman v Superman: Dawn of Justice” and in the “Justice League” trailer, where he displays a badass calibre so massive that even Wolverine would need a change of underwear after running into this guy!

The reason I can say with such confidence that Mr. Momoa will do the King of Atlantis proud is because I’ve seen his portrayal of the title character in 2011’s “Conan the Barbarian” and on the basis of his performance in this severely underrated reboot, when November 17th, 2017 gets here, millions of people across the globe who have spent decades perpetuating those ridiculous Aquaman fish jokes are going to be eating some serious crow!

Jason Momoa steps into the role of the titular Cimmerian warrior Conan, taking the reigns from the original Conan, Arnold Schwarzenegger, while karate and XMA prodigy Leo Howard portrays our hero as a child.

Stephen Lang portrays the villain of the film, the vicious KhalarZym, while Rose McGowan plays his daughter and close ally, the evil sorceress Marique. Our hero’s closest ally Tamara, is played by Rachel Nichols, while Said Taghmaoui plays Ela-Shan, who serves as another of Conan’s allies. Ron Perlman also appears as Conan’s father Corin, while MMA-vet Bob “The Beast” Sapp gives the title character a run for his money as the bloodthirsty Ukafa and the always reliable (though, in this cast, decidedly miscast) Morgan Freeman narrates the film.

In theHyborian age of the Antediluvian (“Before the Flood”) Earth, the Mask of Acheron was created by a clan of sorcerers, bestowing the power of a god upon the wearer, until the mask was shattered into several pieces in battle.

Conan hangs on his fathers every word

Tamara is the last pure blood left in the world

Conan never holds back in a fight

Conan and Tamara make camp for the night

Each of the barbarians took a piece to keep the mask from falling into the wrong hands, but the vicious warlord KhalarZym is determined to retrieve each piece and conquer the world with the power of the mask. All he needs now is the blood of one of the sorcerer’s descendants who created the mask and he may have finally found it in a young monk named Tamara.

However, Zym soon realizes he’s made an enemy out of the wandering Cimmerian warrior known as Conan. Years earlier, Zym had invaded Cimmerian to retrieve their piece of the mask and slaughtered all of its inhabitants, including the tribe’s chief and Conan’s father, Corin.

Conan alone survived and grew to hone the warrior skills his father bestowed upon him. With the fate of the world hanging in the balance, Conan comes to Tamara’s rescue to stop Zym’s plot and take his vengeance.

Conan is eager to master the way of the warrior

Conan and Tamara have finally escaped their pursuers

1982’s “Conan the Barbarian” put the spotlight on the then up-and-coming Arnold Schwarzenegger, giving his career enough momentum to subsequently land him the title role in James Cameron’s “The Terminator”. However, fans of the Conan comics will readily point out how much the film deviates from its source material, and frankly, it hasn’t aged well thirty-four years hence, i.e.Conan’s prayer to Crom which I’ve never managed to make it through without bursting into hellacious laughter.

Upon its release in 2011, Marcus Nispel’s reboot came and went uneventfully, even though it deserved far better. “Conan the Barbarian” is perhaps the most gorgeous looking, well-constructed, and thoroughly enjoyable sword and sorcery fantasy adventure you’ll ever see.

Admittedly, that’s not exactly the highest standard to meet, especially with other such genre entries like “Conan the Destroyer”, “Kull the Conqueror”, and the bona fide cemetery that is the “Highlander” series from part two onward dragging down the batting average. Packed with non-stop sword driven action and stunt work, armies of surprisingly well-conceived CGI monsters and armed with a large enough budget to bring it all to life, “Conan the Barbarian” is easily the best sword and sorcery film since “The Scorpion King” and the all-too-rare one that genuinely delivers the kind of adrenaline-fueled cornball thrills that fans of this genre crave. 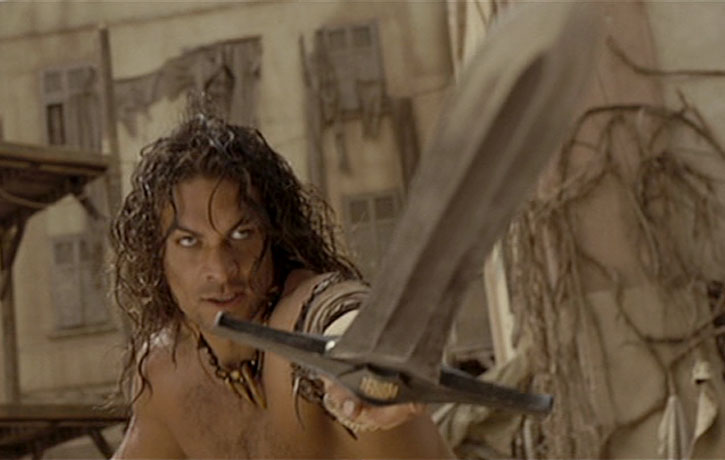 Conan holds his enemy at bay

Corin rules over the Cimmerian tribe

Khalar Zym gives Conan a run for his money

Corin trains his son in the way of the sword

I’m absolutely adamant in my belief that this film by itself is what landed Jason Momoa the role of Aquaman and it was unequivocally the right choice. He is utterly captivating in his portrayal of Conan and an absolute beast with a sword in his hand. Every martial arts lover in the world should give this film a look just to treat themselves to some of the best sword fighting sequences to feature in a non-Samurai film.

That’s actually a fairly apt comparison to make, as the film is clearly using Japanese kenjutsu as the basis for its swordplay. With the way he twirls and clangs blades with his enemies, you’d think that Momoa was wielding a sword with the best of them before he could walk and he’s seldom at a loss for an opportunity to show what he’s got.

Leo Howard matches him well in the prologue as the young Conan and starts the film off strong with Conan’s vain attempt to defend Cimmeria from KhalarZym’s invading forces. It’d be hard to pin down which duel really stands out from the rest, but Conan’s battle with KhalarZym and a swarm of sand warriors created by Marique is a real winner. It really can’t be overstated how flawless Momoa and Stephen Lang’s kenjutsu skills are here, even in more subtle aspects like stance work and gripping the hilt of the sword.

Conan is ready to wage war

The fight with Khalar Zym rages on

Bob Sapp also proves a powerful opponent for our hero to overcome, although theirs is the film’s duel without blades, which is certainly something to miss when the swordwork is handled as well as it is here, though their brawl ends on an appropriately gruesome note.

Fortunately, the swordplay returns in time for Conan’s final battle with KhalarZym, with our hero and villain dangling over an infinite abyss and Zym with the fully reformed Mask of Acheron now at his disposal. Momoa’s mastery of swordsmanship is solidified here as well when he adds a little flash to battle with a perfectly executed circular double wind-up slash to his archenemy!

How “Conan the Barbarian” ended up being so overlooked during its initial release is simply baffling. It’s nothing but insane, riotous-gratuitous fun from beginning to end and brings the Conan legend to life with every dime of its budget on the screen.

Perhaps Jason Momoa’s upcoming portrayal of Aquaman will give the film a well-deserved resurgence, but you certainly need look no further than this film to be understand that he’s going to be one seriously mighty King of the Seven Seas!

Conan is ferocious in the heat of battle