When it comes to bringing comic books to life on the big screen, anime giants Manga and Japan’s most eccentric and prolific filmmaker Takashi Miike make perfect bedfellows. For his “100th” film director Takashi brings to celluloid life another Manga tale and in so doing taps into his inner Kurosawa in this blood and steel supernatural adventure.

Japanese pop star and television actor Takuya Kimura takes on the role of tortured warrior Manji, and Hana Sugisaki plays both Rin Asano – the young girl seeking vengeance for the murder of her parents – and Manji’s ill-fated sister Machi.

Largely known for his television work Sota Fukushi delivers bad guy duties as skilled swordsman Anotsu Kagehisa, leader of the Ittō-ryū society looking to destroy all the martial arts schools to bring them under his control and become the exclusive instructor to the shogunate. Kazuki Kitamura plays Sabato Kuroi a twisted member of the  Ittō-ryū obsessed with Rin.

Other characters looking to add salt on the wounds of Manji’s journey to redemption include; Hayato Ichihara as Shira, a sadistic member of the Mugai-ryu looking to settle a score with Manji, Shinnosuke Mitsushima playing the punk-esque swordsman Taito Magatsu, and Ichikawa Ebizo playing Eiku Shizuma a mysterious roamer with a shared secret.

Yoko Yamamoto is the mysterious Yaobikuni, an 800 year-old nun who infuses the power of immortality into Manji.

The ultimate double team of Manji and Rin 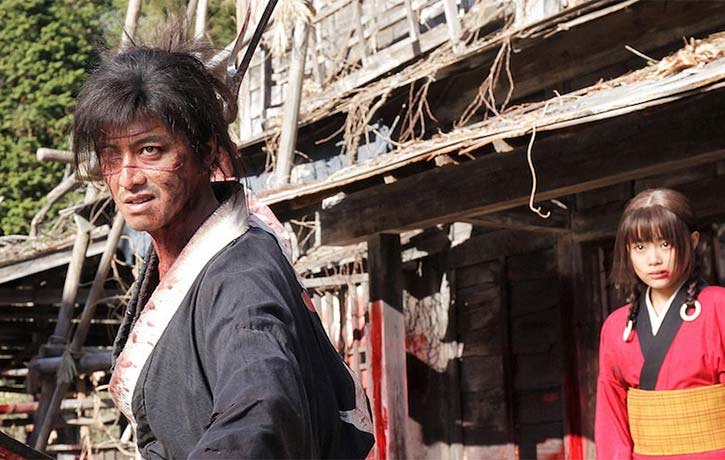 Manji is poised and ready for action

After a brutal and bloody battle, slain samurai warrior Manji is brought back to life by a mysterious witch Yaobikuni and cursed with immortality. Haunted by the brutal murder of his sister, Manji knows that only by fighting evil will he regain his soul. He promises to help a young girl named Rin avenge her parents, killed by a group of master swordsmen, the Ittō-ryū led by ruthless warrior Anotsu. The mission sees Manji caught up in a plot by Anotsu to grab power as he battles bizarre henchmen in his quest for redemption.

Takashi Miike is back with a bloody vengeance revisiting the Chanbara (samurai) genre together with regular collaborator, cinematographer Nobuyasu Kita (“13 Assassins”). Takashi  seems to have enjoyed tapping into the more fantasy elements of the genre on-screen, much like he did with Yakuza Apocalypse. This time however, he knits some threads of old- school samurai flicks of yesteryear – the opening battle in black and white is very much akin to “Zatoichi” tales of old, and Manji’s steely clash with an onslaught of samurai warriors is clearly influenced by the massive scale finales of the later “Lone Wolf And Cub” films.

Takashi does make sure however to hold onto his quirky distinctive style whilst keeping the film firmly rooted in its Manga source right down to the look of the characters, with their trendy uniforms and punk hairstyles.

Manji gets punked by Taito 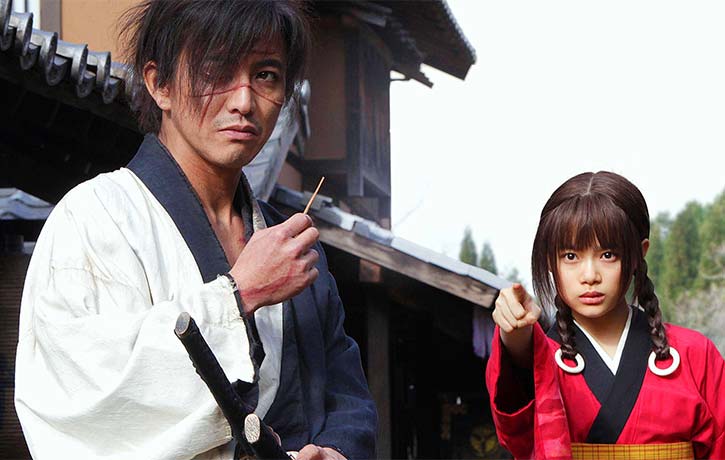 Rin points to her parents killers

Manji wants Eiku to get to the point

The sword action comes blood-drenched, very thick and super fast with everyone from Manji himself to Sabato and the main villain Anotsu sporting a variety of unusual and colourful weaponry – from the Japanese take on the three-section staff to two swords connected forming a deadly staff – slicing and dicing in every fight scene. The weapons are unashamedly quirky and varied, so much so it would have put many a 70’s Shaw Brothers film to shame.

Manji’s fights with each of the Ittō-ryū clan plays out like a video game as he faces each of the henchmen; the twisted Sabato who wears a selection of his victims’ severed heads on his cape like macabre shoulder pads, and Taito Magatsu, the quintessential Manga character complete with funky spiky hair and rock star looks. Virtually every frame of action is soaked with old-school blood splatter and fighting techniques as opposed to the obvious CGI blood with some unpleasantly squelching sound effects and off screen thuds that add to the battle scenes’ intensity. The combination of Nobuyasu Kita’s constantly moving camerawork and Kenji Yamashita’s fast editing keeps a steady pace to the lengthy action scenes. The fights are certainly chaotic and at times obscure in some of the action but not enough to deter any sense of entertainment from the ensuing carnage.

The fight scenes are perfectly interwoven with Manji’s tortured quest and his oath to Rin, alongside the Machiavellian power play between Anotsu and Lord Habaki with whom he is negotiating a seat at the Shogunate table. This veritable cocktail of sorrow, swordplay and double dealing make the two and a half hour running time simply zip by. There’s so much going on at the intersection of these plot threads; the film’s exciting finale, rampant emotion and the intensity with which Manji faces both Anotsu and the delectably evil Shira. Yes there is more swordplay to boot yet Miike chooses wisely to mix in some mind games with the action elevating the showdowns to a more moving finish with a twist.

Surrounded on all fronts

Takuya Kimura on the redemption trail as Manji

Sota Fukushi as Anotsu wants to rule the Shogunate

Let’s face it, if you love Manga and Takashi Miike and haven’t seen this film you really should if you are a fan of grisly dismemberment and over-the-top characters. “Blade of the Immortal” balances dark supernatural drama with all the blood-soaked sword action you would come to expect from Takashi Miike’s own brand of pulp fiction. Like “13 Assassins” the Kurosawa influence (mainly “Seven Samurai”) is evident, this time as an inspired re-telling of “Yojimbo” with a supernatural twist. In fact if Miike re-made Brandon Lee’s “The Crow” it would probably look something like this film.

“Blade of the Immortal” is Miike’s love letter to old school samurai flicks and a hark back to more traditional and less CGI movie-making tools. As the story’s centrepiece players Kimura and Sugisaki exude the kind of bond from the “Zatoichi” and “Baby Cart” films with their touching performances sitting at the film’s visceral core. Mix in splashes of blood and flashes of steel with plenty of slice and dice action and Takashi Miike’s status as an auteur is well and truly sealed. 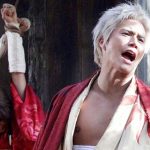 A deranged Shira sets the rules of the game

A witch in time the mystical nun Yaobikuni

Have you seen “Blade of The Immortal”? What did you think of the tense storytelling and samurai fight scenes? What is your fave samurai movie to date and why? Let us know in the comments below; Like, share and join in the conversation on Facebook and follow us on Twitter and Instagram.

Click into a FUniverse of exclusive interviews, get to the point with these Top 10 Samurai Movie Sword Fights, other Top 10’s, and look sharp with NEW Kung Fu Kingdom t-shirts, hoodies, iPhone/Galaxy cases and much more! Don’t forget to subscribe on YouTube for videos too!