It’s entirely appropriate that Manga UK would be releasing this one; from the writer and director of a film called ‘Samurai Cat’, call on ‘The Raid’ films’ most awesome baddie to appear and have it overseen by one of Japan’s most controversial and surreal directors. The result packs a punch with its frenetic martial arts action, cartoon monsters and plenty of vampire fun for added bite.

Veteran actor Riri Furanki is Genyo Kamiura, a Yakuza Oyabun who also happens to be a vampire, ruling a town drained dry by an economic recession and his thirst for human plasma. Playing his lieutenant is Hayato Ichihara cast as Akira Kageyama, a young Yakuza soldier unaware of his boss’s true identity.

Riko Narumi is Kyoko a girl rescued by Kamiura from a vicious rape and with whom Kageyama falls in love. Reiko Takashima is Yakuza Captain Sosuke Zemba, at first loyal to her Oyabun until she realises what he was and slowly starts to go mad. Masanori Mimoto is The Frog, the ultimate monster who looks set to bring about the apocalypse.

Star of “The Raid” 1 and 2, Yayan Ruhian is Kyoken an unassuming-looking henchman but who is in fact a deadly fighter sent by an international syndicate to kill Kamiura.

When Yakuza boss and vampire Kamiura is brutally killed by a rival syndicate, he passes on his vampire powers to loyal lieutenant Kageyama. The newly formed blood sucker will stop at nothing to avenge his former boss but his presence brings about a monster who looks set to usher in the end of the world. 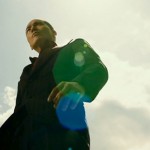 Kageyama is the new Oyabun in town

Vampire hunter is in town

To say no time is wasted getting stuck into the action would be an understatement; the film opens immediately as Kamiura, armed with a Katana, single handedly battles a rival Yakuza gang. Bullets, blood and steel splash about the screen with Kamiura proving himself to be hard to kill in this particularly messy and brutal fight scene. And so begins Takashi Miike and Manga’s decent into a cartoonish, over-the-top fantasy martial arts horror.

Whilst it does feature some of Takashi’s trademark disturbing moments, Kamiura having his head ripped off for example, and a callous rape scene, Takashi switches into fun mode to give fight, horror and Manga fans a rollicking good ride. Interspersed with Yakuza – vampires running rampant and a foreboding apocalypse is some decent high-energy fight action.

“The Raid” fans eagerly awaiting the arrival of ‘Mad Dog’, Yayan Ruhian himself (as Kyoko) don’t have to wait long, with perhaps one of the best entrances for a villain. An unassuming, touristy looking Yayan hovers in the background as Kamiura faces down the vampire killer giving fans an almost pantomime-like “he’s behind you! moment”. Much of the martial arts featured is similar to the fast and frenetic bone crunching action of “The Raid” films which is in no way is a bad thing.
The fight between Kamiura and Kyoko is thrilling to watch with Takashi employing some over the shoulder camera shots to capture the full energy and dynamism of Yayan’s signature whirlwind Silat manoeuvres, a technique employed throughout the film.

The kappa demon has everyone a little on edge

Vampire vs Frog the ultimate showdown

The mother of all monster trucks

Although it changes pace with Kageyama feasting on the civilians he was charged to protect before becoming a vampire, it never loses its grip for audience attention with a heady mix of random unexplained moments (like Kamiura’s former captain losing her mind), with time for a brief love story between rape victim Kyoko and Kageyama, and of course vampires running amok.

Ultimately though surrealism, comedy and high-energy fight-fu come thick and fast with the arrival of Kaeru-kun, a creature dressed in a low rent frog costume, dispatched to deal with Kageyama. There’s an engaging showdown that pits vampire vs non-vampire Yakuza, featuring a colourful monster truck whilst Kageyama does battle with the frog monster. This is pure fun to watch with some excellently staged martial arts.

Ichihara plays it straight displaying some formidable skill whilst the frog matches with some Bruce-Lee style mannerisms and moves that must be seen to be believed…and enjoyed. When it comes to the main event however it’s a mystery why the Kageyama vs Kyoken face off has less of the fast- paced action shown so far: the two warriors punching rather than battling it out, although this does contain a thrill factor of its own giving the scene a sense of a clash between titans.

If you have any pre-conceptions of what to expect from “Yakuza Apocalypse”, discard them, this is a live action manga/Takashi coupling after all! Its mix of horror and martial arts chills the spine and tickles the funny bone, whilst scrambling the brain with its unorthodox imagery, over the top cartoon style, and for fight fans features some wild-yet-enjoyable, hectically-paced martial arts action.

Yakuza vampire horde are out for blood

Kageyama and Kyoken ready for battle

This boss is getting a little long in the tooth

Martial Art of the Month: Capoeira