Jackie Chan returns as the roguish adventurer, known as “Asian Hawk”, “Asian Condor”, or just “Jackie”, depending on which version you’re watching! After the success of the Indiana Jones movies, Jackie decided to inject his unique brand of action and comedy into the format of an explorer looking for valuable ancient artefacts.

Actress Carol Cheng, often referred to as Do Do Cheng, plays “Ada”, an expert in African geography, assigned to help Jackie. Cheng has had a fairly prolific career in Hong Kong television and cinema, and has won many “Best Actress” awards for her work. After a string of hit shows, Cheng became the highest-paid female star on TVB.

Spanish actress and model Eva Cobo de Garcia plays “Elsa”, the granddaughter of a German soldier who was part of the unit in Africa that was responsible for hiding the gold.

Japanese actress Shôko Ikeda is “Momoko”, who is searching for the meaning of life in the Sahara when she becomes involved in the expedition.

Alfredo Sánchez Brell, also known as Aldo Sambrell, stars as “Adolf”, a soldier who survived the World War II plot to hide the gold. The Spanish actor will be familiar to fans of the Sergio Leone Westerns “A Fistful of Dollars”, “For a Few Dollars More”, “The Good, The Bad and The Ugly”, and “Once Upon a Time in the West”, where he was frequently cast as a member of the antagonist’s gang.

Having narrowly escaped from some tribesmen, treasure hunter Jackie is summoned by the mysterious Baron Bannon. The Baron tells Jackie the story of a German commander named Hans von Katterling and his regiment. They were tasked with burying 240 tons of gold at a secret base deep in the Sahara Desert in Africa before the end of the Second World War. 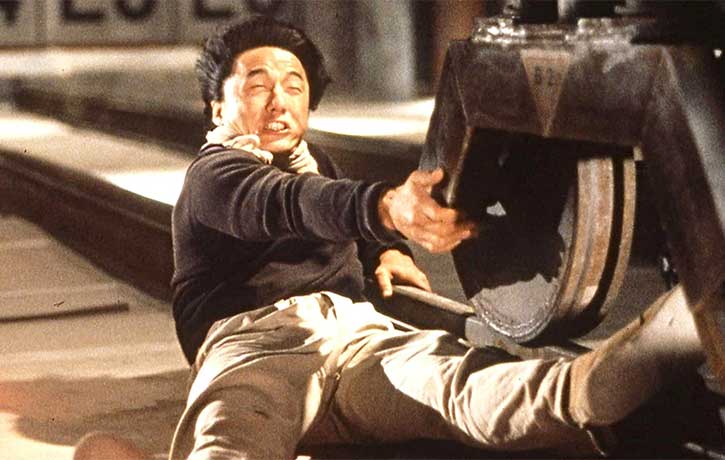 Spectacular timing on these stunts

The soldiers involved in the operation strangely vanished before the location of the gold was revealed. At the request of the United Nations, Bannon gives Jackie an unofficial mission to locate the base and recover the gold. Upon discovery of the gold, Jackie is promised a one percent share of the treasure. He is partnered with Ada, an expert in African geography. The pair come across Elsa, who is trying to find out what happened to her grandfather, the German commander von Katterling.

As the group follow the clues that will lead them across the desert to the secret base, they must fight off the many competing factions who are all after the golden fortune.

Jackie Chan is a big fan of gadgets and he often tries to create situations in his films where they can be used. Our hero starts the action by flying in on a motorised para-glider. He upsets some tribesmen, not because of the valuable emeralds he is stealing, but because he drinks their water! Cue a crazy downhill chase with Jackie escaping in (probably for the first time ever in a film) a giant inflatable ball, now popularly known as “zorbing”!

Tussling with the baddies

Summoned to Madrid, Jackie has a brief skirmish using his Jeep’s door and mirror as weapons. Whilst searching for evidence in Elsa’s apartment, two armed men arrive, also seeking information.

There is always a great balance in Jackie’s fight choreography in a two-on-one situation. Here he uses flips, grapples and kicks to great effect. A particularly nice move is when he uses a rug to flick a pistol up off the floor which he catches mid-air as he dive rolls over the back of his opponent. There is a comic touch too with a bigger pay off much later in the film when he whips off Elsa’s bath towel to distract the two thugs. 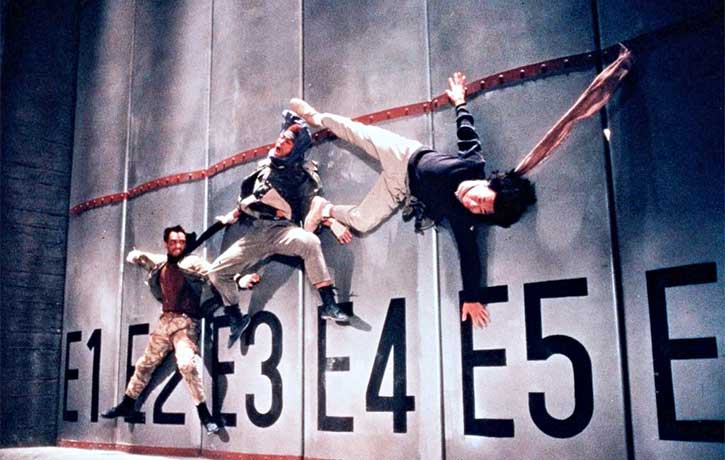 In the wind tunnel

Still in Spain, the Jackie Chan Stunt Team join forces with the world-renowned Remy Julienne Stunt Team. If you are unfamiliar with their work, they have been responsible for some of the best vehicle chases in movie history, in films such as “The Italian Job” and several of the James Bond films.

It proves to be a great match as six cars pursue Jackie on a motocross bike through the streets. Pedestrians leap out of the way as the bike and cars skid and jump through various set-ups. In a warehouse, a stuntman is clipped by Jackie’s bike and flips backwards onto the concrete in typical Hong Kong style. Jackie himself flips and rolls out of the way of the high speed cars at the very last second.

In a multi-cut sequence Jackie back hip circles over a bar as a car jumps just a metre or so beneath him. The sequence concludes with a spectacularly timed stunt in which two of the pursuing cars and the motorcycle launch off a ramp into a harbour with Jackie leaping from his bike to cling onto a cargo net. It is shot from several angles and repeated in slow motion so the audience can really appreciate it’s magnitude.

The action moves to the more exotic locations of North Africa and a great comic action sequence in an hotel. As the competing factions converge on the hotel, Jackie finds himself caught in the middle of all the chaos. Even though there are some “Three Stooges” style slapstick moments, there are still plenty of nifty martial arts moves, with some heavy hits and falls. A repeat of the bath towel distraction from earlier in the movie always generates a big laugh when it doesn’t quite go according to plan!

Having rescued his female companions from white slave traders, Jackie and co eventually arrive at the secret base. Their first obstacle is to escape a large number of spear-wielding tribesmen, which gives Jackie an opportunity to show off his weapons-twirling kung fu skills.

Once inside, Jackie has several fights with a gang of gold-hunting mercenaries. The way he moves around the different sets is incredible. Jackie jumps and rolls on large pipes, and swings himself up and over various gantries like an Olympic gymnast. All the while there is still some of the fastest onscreen fight choreography you will witness, and he still finds time to punctuate it all with lots of humour. The action continues onto some oscillating platforms to increase the sense of danger during the fighting.

Ever the innovator, Jackie’s final battle takes place in a wind tunnel. The setting allows Jackie to take his acrobatic style to a new level and includes plenty of comic moments as he flies around the tunnel.

The end credits reveal a jump onto a chain didn’t quite go according to plan and ended with Jackie suffering a very painful dislocated sternum.

This film arguably marks the end of Jackie Chan’s “Golden Era” of the eighties. Although his follow-ups such as “Police Story 3: Supercop“, “Drunken Master 2” and “Rumble in the Bronx” were very successful, and have some great stunts and fighting, none of them have the range and amount of action that Jackie packed into his 1980’s films.

“Operation Condor” is a collection of classic Jackie Chan set-pieces and is brimming with slapstick humour. The visual comedy has universal appeal, no matter what language you speak. There are lovely little flourishes throughout as Jackie flicks up his chewing gum into his mouth, or the way he hops and skips up and over walls. Directed by Jackie, the film has some great looking camerawork too, especially with the sweeping desert vistas and camel trains.

When it was made, this was the most expensive Hong Kong film ever produced, and it struggled to recover its money, not that it was a flop by any means. At the box office and at the awards, it was beaten by the film that marked the start of the “new wave” of martial arts entertainment that would dominate Hong Kong movies of the nineties; Tsui Hark’s “Once Upon a Time in China“.

88 Films have packaged their Blu-ray beautifully, with some great new artwork from Kung Fu Bob. Extra features include a fascinating new interview with Bruce Fontaine about his early days in the martial arts and how he came to end up in Hong Kong action movies. He reveals some candid and often amusing insights into his early experiences in films, and how much he learned about action film making from Jackie Chan himself.

There is an engaging new audio commentary from film-maker Arne Venema & Hong Kong film expert Mike Leeder. The picture and sound quality are absolutely superb, and vastly superior to my aging VHS and DVD versions! The viewing options include the never-before-seen 117-minute long uncut version, and 107-minute Hong Kong version.

Accompanying this are audio selections that range from original and remastered Cantonese soundtracks, to the classic English dubs that older fans will remember. To round off their presentation, 88 Films have included an amazing booklet packed with information, artwork and behind-the-scenes photos, as well as a new interview with Vincent Lyn, one of the film’s martial arts action actors.

Some of the fastest fight choreography you’ll ever see

This key could unlock a fortune or a dark secret

Perhaps then this is a fitting bookend to a decade that started with “Young Master“, and gave us an incredible body of work that included the ground-breaking “Police Story“, the original “Armour of God“, the “Lucky Stars” comedies, the “Project A” movies, Jackie Chan’s personal favourite “Miracles“, and of course “Wheels on Meals” and “Dragons Forever“, to name but a few. As an encyclopaedia of Jackie Chan’s style of incredible contemporary action and comedy from that era, “Armour of God II: Operation Condor” has it all.

“OPERATION CONDOR” is OUT NOW courtesy of 88 Films and you can also order your copy via Amazon!

Do you think “Operation Condor” represents Jackie Chan at his very best in terms of inventive martial-arts action and astonishing stunts? Was this Jackie’s last great film of the “Golden Era”? Let us know which other classic Jackie Chan movies you’ve been enjoying recently in the comments below, join in the conversation, share this on Facebook, and follow us on Twitter & Instagram.

Wear your ARMOUR OF GOD wherever your martial arts’ adventures take you, then come back to the FUniverse, of news, Top 5’s, Top 10’s, interview exclusives, gear up in KFK armour too and of course, subscribe for more globe-trotting fests-of-FU on YouTube!