If you’ve spent even five minutes online over the past three-and-a-half years, it’s pretty much a certainty that you’ve seen the #ReleaseTheSnyderCut hashtag, and after the strenuous push by fans, Zack Snyder’s original vision of the much-anticipated superhero ensemble is out for the whole world to see.

Coming in at a whopping 4 hours, the Snyder Cut is as grandiose and epic as its running time would suggest, and still manages to whizz right by in the blink of an eye.

Resembling a comic book brought to life in the truest sense of the term, “Zack Snyder’s Justice League” is the bombastic, action-packed, slugfest and emotionally-powerful superhero adventure that its team deserves, and is arguably Zack Snyder’s best movie yet.

Following Superman’s heroic sacrifice against Doomsday in “Batman v Superman: Dawn of Justice”, the general of the armies of Apokolips known as Steppenwolf arrives on Earth to round up three ancient artifacts known as the Mother Boxes (sentient computers).

The three boxes were left behind on Earth thousands of years ago after the first failed attempt to conquer the Earth by the cruel ruler of Apokolips, Darkseid.

With Steppenwolf heading straight for Themyscira and Atlantis to claim them, the third box is in the care of S.T.A.R. Labs scientist, Silas Stone, who used it to save his nearly dead son Victor, the box having transformed him into an immensely powerful Cyborg.

Superman prepares to take flight with a brand new suit

Wonder Woman breaks out her lasso

Though Victor, horrified at what he’s become, tries to hide from the world, he soon finds himself recruited by Diana Prince in order to stop Steppenwolf. Bruce Wayne also recruits the help of two other “metahumans”, the superhumanly-fast Barry Allen and the human-Atlantean/Human Hybrid, Arthur Curry, to oppose Steppenwolf’s attack.

However, with an army of Parademons by his side, the five heroes come to realize that there might be a way to bring Superman back to life to stop Darkseid’s plan.

Aquaman is an outsider but hell always do whats right 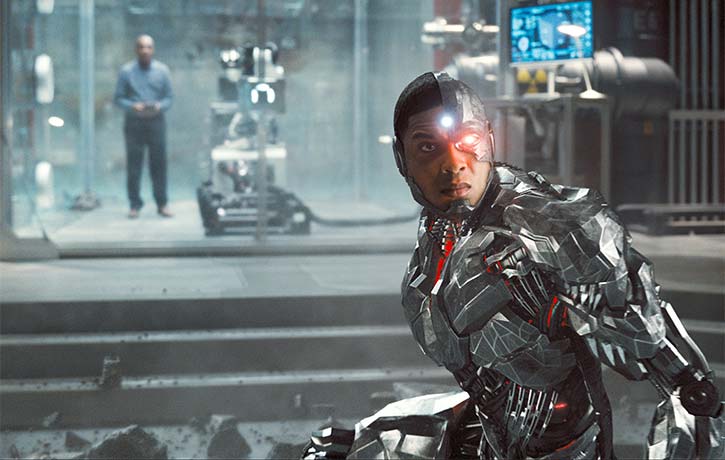 Cyborg comes to his fathers defense

The League is Ready for Battle

Seeing DC’s premiere team of heroes come together is obviously a fanboy’s dream come true, but with a canvas of four hours to tell its story, the arcs of each hero individually is ultimately what makes the film connect.

Viewers already know Batman and Wonder Woman the best, and the film dives deep into the backstories of Aquaman and The Flash. But at its core, the movie is really Cyborg’s story. His body destroyed and reconstructed, and the power of complete digital omniscience laid at his feet, Victor Stone is nonetheless an isolated recluse who feels his humanity has been taken from him.

With Ray Fisher’s tour-de-force performance as Victor Stone, Cyborg is the true breakout of the movie. Ezra Miller also gives a highlight performance with his lighthearted banter as Barry Allen, the fanboy of the team relishing the chance to join a literal League of heroes.

Superman must suit up for the battle with Steppenwolf

Obviously, Jason Momoa lives and breathes bad-ass charisma as Aquaman, as anyone who saw 30 seconds of his 2018 solo movie already knows. Ben Affleck also channels Batman returning to his centered and always-prepared self after being shown the light again by the Man of Steel in “Batman v Superman”, and Gal Gadot’s still the best Wonder Woman fans could’ve ever asked for.

Of course, as Bruce Wayne himself points out, there’s room for more at the Justice League’s table. We see their ranks beginning to grow by the end with the arrival of Martian Manhunter, a literal shape-shifter who’s long been hidden in plain sight (his identity will remain a secret here for those who came in late).

At a length of four hours, the longest-running of any superhero movie ever made, “Zack Snyder’s Justice League” never feels tedious, and blasts right by with incredible action scenes and compelling, emotional interplay between the heroes of the team and their adversaries from Apokolips.

Darkseid will stop at nothing to conquer the Multiverse

Batman arrives on the scene

Leading the Parademon horde from Apokolips, Steppenwolf is a villain as terrifying as he is tragic, unleashing his axe on Amazons, Atlanteans, and humans alike to find the Mother Boxes, all while burdened with the promise of claiming another 50,000 worlds for his sinister overlord, Darkseid.

Though the latter is mostly a command-from-a-behind-the-scenes type villain, viewers still get to see him lead the charge in the movie’s flashback to his first attempted conquest of Earth thousands of years ago.

It’s a massive “Lord of the Rings”-style battle scene full of spears, arrows, kicks, and axes in which humans, Atlanteans, Amazons, and Greek demigods stand against him, with a little help from the Green Lantern Corps, too.

The Flash readies himself to bring back Superman

Seeing the League work together with their powers and fighting skills makes all of the action scenes, such as the underground tunnel battle with Steppenwolf, burst right off the screen. Wonder Woman as always, relishes a good sword duel against Steppenwolf, whilst Batman goes right ahead unleashing his kicking skills.

But of course, in a Justice League movie, Superman’s got to be pulled back from death sooner or later, and his initial disorientation after he’s woken up sees the entire League pitting against him in an attempt to try to bring him back to his senses in the outside battle in Heroes Park. (Cyborg’s extra set of arms adds a bit more fistic punishment into the equation here as well as in other action scenes in the movie.)

Speaking of the Last Son of Krypton, comic book fans will surely dig his brand new black and silver suit from his comic book resurrection.

The final showdown with Steppenwolf and the Parademons brings the entire League together in the most epic fashion possible. Everyone gets their own money shots, and scene-stealing moments (whilst the whole team work together in tandem) in ways that viewers will thunderously cheer (and fist pump) for! This is the epitome of that rich blend of superpowers and humanized fighting skills that Snyder is renowned for.

And…if Superman’s entry into the battle, and his subsequent use of “Street Fighter” Shoryukens against Steppenwolf isn’t simply one of his best moments ever put to film, I don’t know what is! 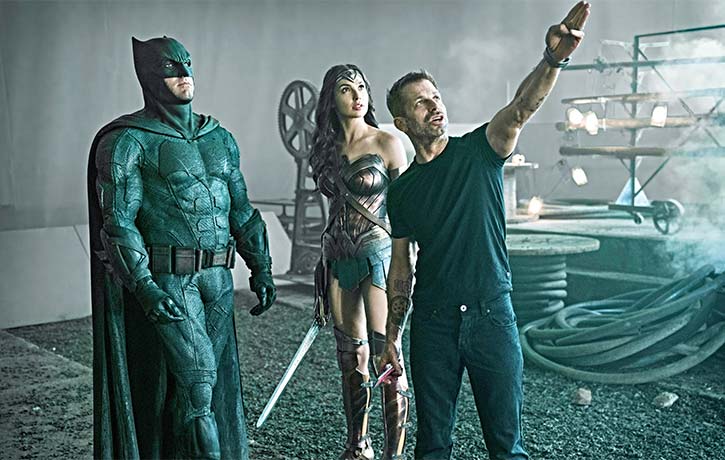 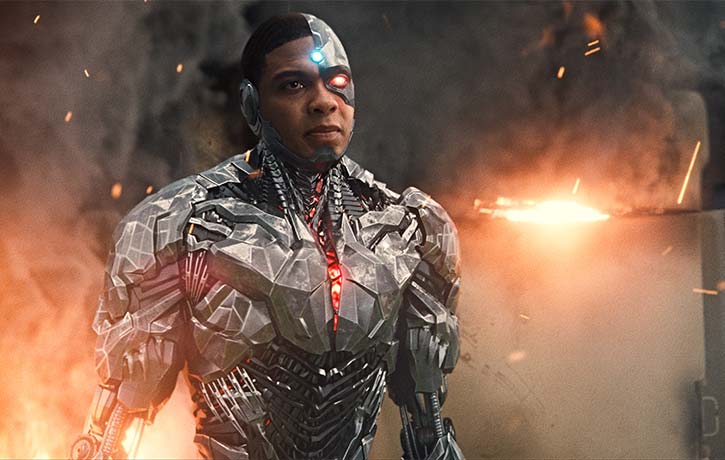 Will The League Return?

The “Snyder Cut” spent years growing into a legend that many breathlessly yearned to see, and with the arrival of “Zack Snyder’s Justice League” at long last, the wait was well worth it, and then some!

Already, the hashtag has shifted from #ReleaseTheSnyderCut to #RestoreTheSnyderVerse, with many fans eager to see the final two chapters in the five-movie story Snyder had mapped out.

Whether those hopes are realized, we can only wait and see…If the ending of “Zack Snyder’s Justice League” is anything to go by, teasing the Knightmare future of Darkseid’s coming attack and bringing Jared Leto’s Joker into the mix (for a deliciously-tantalizing final cap-off) – the world might yet see the Justice League back in action to thwart Darkseid yet again. Thrilling stuff!

Aquaman Cyborg and The Flash head into the final showdown

Steppenwolf reports back to Apokolips

“Zack Snyder’s Justice League” is currently streaming on HBO Max in the U.S., Sky Cinema & NOW TV in the UK, and other streaming platforms around the world.

Have you seen the Snyder Cut yet? What are your thoughts on the movie’s epic action fight scenes and the formation of the Justice League? Would you like to see #RestoreTheSnyderVerse come to pass for the rest of Zack Snyder’s planned stories? Let us know in the comments below; Like, share and join in the conversation on Facebook and follow us on Twitter & Instagram.

IT WOULD BE AN INJUSTICE TO LET YOUR SUPERHERO SELF SLEEP ANY LONGER…SO AWAKEN and RISE in the FU-niverse with these in-depth interviews, check out our Top 10 Superhero Fights part one and part two, IGNITE your SUPER-FUel-power in official KFK GEAR and subscribe on YouTube for more MARVELous & DCEU fight action all happening on a FU-NIVERSAL level!