How often has an extended version or director’s cut been the subject of such immense speculation and anticipation as much as “Batman v Superman: Dawn of Justice” has?

With the news preceding the film’s theatrical release this past March that it would be a full THIRTY MINUTES longer upon its home media release, the fan theories and speculation have been absolutely endless. The film has finally dropped on both digital platforms and DVD and Blu-ray in the US and did so in the UK on August 1st, just in time for the third chapter of the DC Extended Universe, “Suicide Squad”!

With a pretty substantial addition of new material to the film, raising its running time from two and a half to three hours, it becomes necessary to provide a second evaluation of the film, especially given that the Ultimate Edition was the version that director Zack Snyder had originally intended to release in theaters.

Wonder Woman has been around for centuries..

Batman has a bad history with freaks dressed like clowns

The Man of Steel arrives to save the day

You can read my thoughts on the theatrical version here, but suffice to say that this new version of the film certainly exceeds the original. Indeed, watching the Ultimate Edition of “Batman v Superman” is like looking at the theatrical version under a microscope – it brings the strongest elements into even greater focus while giving the viewer a glimpse at new details which we had previously not seen!

There are many ways that the film benefits from the longer version, but arguably the most significant is Lex Luthor. In the Ultimate Edition, we’re given new material that shows that he has been in control of every single event taking place on screen from the start. Our nefarious villain is shown to be a master of subterfuge and manipulation, with the North Africa sequence and the bombing of the US capitol getting some especially juicy new screen time that totally changes the context of what we saw in the theatrical version.

We also come to see that the public persona Lex displays is as much a mask as Batman’s own. He takes numerous opportunities to speak highly of his father’s influence on him in public only to reveal the truth of his abused childhood in his speech to Superman. There’s also some very tantalizing new footage added to the ending, along with the restoration of a deleted scene released online days’ after the film’s theatrical debut. This hints at there being more to Lex’s plot than he’s let on and teasing where things are headed for “Justice League”.

We also get some new scenes with Superman and more specifically, with Clark Kent and his investigation into Batman’s activities that ultimately makes them enemies, along with “Hunger Games” star Jena Malone’s appearance that was ultimately excised from the theatrical version. Fun fact – I personally got to speak to her at last year’s Tampa Comic-Con, where everyone present had to find some way to tip-toe around the fact that questions regarding her role in the film were off the table. You can hear the audio below (I come in at: 29:45):

And, of course, no extended version of “Batman v Superman” could possibly be complete without some new Kapows! thrown into the action sequences. Both of our title characters now get more punches in their face-off, while the warehouse fight (aka the best Batman fight scene ever!) is even more brutal than before. Batman tosses in some additional elbow strikes and head-butts along with snapping several arms and legs. The finale with Doomsday also has some added action weight as well, including a somewhat bloodier conclusion. This also is where the film earns its R-rating, in addition to an added F-bomb and a glimpse of Bruce Wayne’s bare backside in the shower, but it’s really not too much of a stretch that the Ultimate Edition could’ve gone into theaters at essentially its current length, while snipping out thirty seconds to a minute to get it below the PG-13 threshold.

As for what special features are found in the film’s home release, you’re absolutely going to want to break down and grab the Blu-ray for this one! Not only are you getting both the theatrical version and the director’s cut of the film, but the extra features section is chock full of goodies that will blow away any hardcore DC Comics fan.

The Beast of Doomsday threatens to destroy the world

Bruce receives a visitor from the future

Lex Luthor has found the King of Atlantis

We get such featurettes as “Gods and Men: A Meeting of Giants” and “The Warrior, The Myth, The Wonder”, which delve into the history of Batman, Superman, and Wonder Woman in the lore of the DC Universe, along with “Uniting the World’s Finest”, which gives a peek into what’s in store in the upcoming chapters of the DC Extended Universe, “Suicide Squad”, “Wonder Woman”, and “Justice League”. We’re also treated to a look into the creation of Batman’s gadgets and the film’s incredible, comic book-esque visual style in “Accelerating Design: The New Batmobile” and “Batcave: Legacy of The Lair”, while “The Empire of Luthor”, gives viewers a trip through the history of Lex Luthor in DC lore.

As for the film’s astonishing action sequences, viewers are given a glimpse into all the blood, sweat and tears required to bring the physical abilities of these modern titans life in “Superman: Complexity & Truth”, “Batman: Austerity & Rage”, and “Wonder Woman: Grace & Power”, while “The Might and The Power of A Punch” actually gives the viewer an analytical blow-by-blow of the power, damage, and technical precision The Dark Knight and The Man of Steel inflict upon one another in their superhero smackdown on the streets of Gotham City. With special features like this and an extended version of the film that vibrantly takes it to greater heights, the Blu-ray of “Batman v Superman” for genre fans is assuredly to die for!

Batman unleashes all his fury 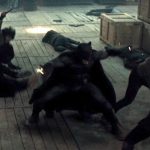 Four opponents is nothing for Batman

Superman is furious at Lexs ultimatum

The Ultimate Edition of “Batman v Superman: Dawn of Justice” improves on the film in just about every regard. It’s more visually stunning, more action-packed, more emotionally powerful, and more philosophically fascinating and without a doubt, it’ll absolutely come to be seen as the definitive version of the film. With trailers for both “Wonder Woman” and “Justice League” having dropped at San Diego Comic Con, along with a new one for “Suicide Squad” which you can see below, there’s never been a more exciting time to be a DC Comics fan. Between all of those and the Ultimate Edition of “Batman v Superman”, Zack Snyder gets a hearty double thumbs up to keep making films in the DC Extended Universe from now until Doomsday – pun absolutely intended!