China’s answer to “G.I. Joe” arrives in the form of “Wolf Warrior”, a guns-blazing, explosion-laden love letter to the People’s Liberation Army. With Wu Jing in the director’s chair and Scott Adkins assuming villainous duties, the film is primarily a guns n’ bombs-driven action-war film that also serves up a decent dose of martial arts amid a cyclone of bullets, tanks, and land mines.

In addition to directing the film, Wu Jing leads the way in the role of Sergeant Leng Feng, an expert sniper with a predilection for disobeying orders where it benefits his fellow soldiers. Yu Nan portrays Lieutenant Colonel Long Xiaoyun, commanding officer of the military’s most elite unit, the “Wolf Warriors”, while Scott Adkins takes on the role of the villainous Tom Cat, (yes!) an ex-Navy SEAL turned mercenary completely untethered to the fiery patriotism or sense of honor that drives Leng Feng. Recruiting Tom Cat and his compatriots for his personal vendetta against Leng Feng is the mafia overlord of the film, drug kingpin Ming Feng, played by Ni Dahong.

Following a tense hostage situation, Sergeant Leng Feng of the People’s Liberation Army is court-martialed by his superiors for disobeying orders, despite the fact that his actions saved the hostage’s life.

Following his release, Leng Feng joins the Wolf Warriors for what is supposed to be no more than a typical army training exercise. However, he’s unfortunately become the target of the vicious drug lord Ming Feng, who happens to be the brother of the madmen Leng Feng had killed earlier. Ming Feng recruits a team of highly trained mercenaries, under the leadership of ex-Navy SEAL “Tom Cat”, to take out Leng Feng, while the Wolf Warrior’s training exercise quickly turns into a battle for their lives.

Youre nothing but a bunch of boy scouts

Tom Cat is up for the challenge

It must be emphasized that “Wolf Warrior” is, first and foremost, a military action movie with a side order of martial arts. If the former is what you crave, you can most certainly expect a lot of bang for your buck, pun intended. Wu Jing’s character of Leng Feng is probably about the closest thing to Rambo ever seen in a Chinese movie. He truly is a super-soldier in every sense of the term, a man who can be in the middle of his one-thousandth push up one minute and be standing to attention for his commanding officer the next without even looking out of breath.

Wu Jing really puts himself through the ringer for his character, so much that his physical performance in the film arguably approximates military training (there isn’t a single second of the film’s latter half where he isn’t soaked in sweat.) The Wolf Warrior training exercise is well-executed overall, but seems marred by a sequence where a pack of wolves attack our heroes. The idea may be to drive home the wolverine connection to the elite military unit, but the less than decent CGI doesn’t do the film any favors, to say nothing of the fact that the world isn’t far enough removed from “The Twilight Saga” yet for CGI wolves to start making a resurgence.

However, the second half of the film is where it all pays off and World War III truly breaks out in one Chinese forest. Wu Jing proves himself a very adept action director who knows how drive the stakes, the explosions, and the emotions to their highest. Nowhere is that displayed better than when our heroes are pinned down below a hill by Tom Cat’s gang desperately trying to figure out a way to rescue their wounded platoon leader as he steadfastly orders them to finish him off. It’s a genuinely powerful and gripping sequence and truly makes the viewer feel the camaraderie between the Wolf Warriors.

Leng Feng takes down his adversary 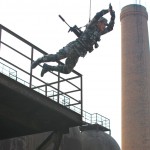 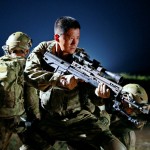 Leng Feng and his men take a stand

While the film is primarily focused on military action, Wu Jing does bring on a certain kung fu flavor to the ample explosion-fu. One of the most memorable moments of the film sees him sneak up on one of Tom Cat’s compatriots, disarm his rifle whilst simultaneously removing his sidearm from its holster and chambering a round before putting his adversary down. Moments like that are the kind of gunplay combined martial arts mindset that were all over “John Wick”, and it’s a thing of beauty to see it pulled off here.

Another similar sequence sees Leng Feng with his foot on a landmine, and the method he devises to escape requires him to summon the focus and patience of a yoga master! The martial arts featured here are well-suited to a military action-adventure, and not massively airborne aside from a few flying kicks by Scott Adkins -but there is a true lethality to it such as when one of Leng Feng’s compatriots duels with a machete-wielding associate of Tom Cat’s, with his clever implementation of a hand-grenade at the right moment. The film can concludes with a vicious knife-fight between Wu Jing and Scott Adkins, and these two martial legends do not disappoint.

If you’re looking for explosions, gunplay, tanks, military bonding, and a dash of martial arts to go with it, “Wolf Warrior” is a solid choice, testimony to Wu Jing’s skills as an action director, with both he and Scott Adkins playing off each other well. Hopefully, the two will meet again for a rematch, and Wu Jing steps back into the director’s chair with some new tricks up his sleeve.