Seagal is DEA agent John Hatcher, stretching his acting muscles as a burned out cynical warrior against the drug cartels. Joining Seagal when trouble taps them both on the shoulder is Keith David as Max, Hatcher’s fried and army buddy. Max is the opposite, increasingly angered by the drug mafia running roughshod in his town.

At the centre of all the trouble in Hatcher’s small town suburbia is Basil Wallace, who plays Screwface the nefarious leader of the Jamaican drug gang terrorising the town with extreme violence and Voodoo mysticism. Hatcher is not the only nemesis to Screwface with Tom Wright completing the righteous trio as Jamaican vice detective Charles who’s spent half his career hunting this ‘Posse’ leader.

DEA agent Hatcher, despondent with the futile war on drugs, resigns and visits his family to re-discover his gentler self. Whilst out for a drink with army buddy Max, Hatcher intervenes in a gang hit by a Jamaican drug gang known as the Posse. Angered at his interference, the gang leader Screwface orders the death of Hatcher and his family. After a number of attempts on their lives, Hatcher teams up with Max and Jamaican cop Charles to end Screwface and the Posse’s reign of terror.

The Posse unleash their displeasure

Say hi to my silent partner 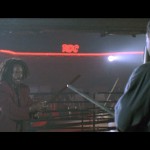 Clash of the titans

A posse hitman feels the effects of Shihonage

Well this is one way to clear a table

The Hatcher family has been marked

Whilst “Nico” and “Hard to Kill” only featured minimal yet impressive fighting action, Seagal has included much more in this, his third outing. In between the numerous shoot outs featuring virtually every sort of firearm imaginable, bordering on “gun porn” (see Hatcher carefully holding his “silent partner”) Seagal has included a wider range of Aikido techniques along with some swift, punch and block combinations taken from his Itosu-Kai Karate skills. The shopping mall scene features Seagal employing some speedy, balletic Aikido moves against the Posse henchmen, with an impressive flair of execution we see gritty knife attacks and observe a baddie crashing into numerous glass cabinets.

Seagal gives Hatcher an air of indestructibility instilling the same sort of fear the Posse reserve for their leader Screwface who they believe wields the power of voodoo. This presents Hatcher with a genuine threat of the Posse’s ferocious determination to kill him. As Charles and Max stick to their guns in the film’s climactic finale, Hatcher kicks, punches, and throws the veritable Posse platoon across the room, painfully incorporating some DIY tools with a wince-inducing leg break thrown in for good measure. Hatcher’s Randori-style battle has plenty of adrenaline-fuelled tension leading to the inevitable sword fight with Screwface. This also presents an equal threat to Hatcher as Screwface charges his sword at him with deadly force, compelling Hatcher to up his game, and the excitement quota into the bargain.

Writers Mark Victor and Michael Grais brought their own take of the gritty cop thriller, from having penned episodes of “Kojak” and “Starsky and Hutch”, to Seagal’s bigger budget actioner. The duo’s story that casts a critical eye on the drugs war gives “Marked for Death” just enough of an extra dimension to notch it above most of the action films of its time. However it remains at heart a thrilling shoot ‘em up, all out martial arts carousel with Seagal doing even more of what the big man does best.

Talk to the hand

Screwface is always ready for a fight

Hatcher stops a Posse soldier in his tracks

Hatcher is not impressed with these boy toys

Hatcher is having a smashing time

Charles on the trail of Screwface