Chinese actor, director, scriptwriter, presenter, and singer, Da Peng (aka Dong Chengpeng) stars as “Zhuge Qingyun”. He is probably best known internationally for writing and starring in the comedy series “Diors Man” and the movies “Monster Hunt 2” and “Journey to the West: The Demons Strike Back”. Known for her role as Yu Mo in the 2011 film “The Flowers of War”, directed by Zhang Yimou, Ni Ni stars as “Metal Dragonfly”. Her growing popularity has led to roles in the blockbusters “The Warriors Gate” and “Wu Kong”, and a leading role alongside Andy Lau in “Shockwave 2”.

Another muse of the director Zhang Yimou making her debut in his movie “Under the Hawthorn Tree”, actress Zhou Dongyu appears as “Xiao Yuan/Circle”. Having won several awards for her debut, she has gone on to win multiple Best Actress awards for her roles in films such as “My Old Classmate”, “Never Say Goodbye”, “Soul Mate”, “This is Not What I Expected” and “Better Days”. 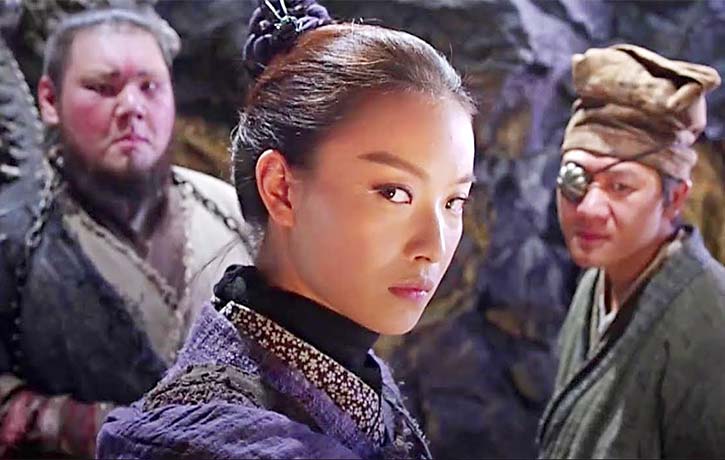 Dao Yichang is the new detective at the police bureau in Kaifeng City. His colleagues take a dislike to him and fabricate a series of “Wanted” posters for non-existent criminals and send him off to search for them.

In his search, Yichang encounters Dragonfly who is able to change her face and the two are drawn into a fight to stop an alien fish creature. Dragonfly belongs to the magically empowered Wuyin Clan who are fighting creatures that arrived from the stars two days previously.

The clan seek the powerful Dunjia device that will aid them in the fight. In search of their prophesised leader, Zhuhe infiltrates a rival clan’s hospital. He rescues a naive and slow-witted girl he names ‘Circle’, believing her to be their saviour.

After Yichang is thrown out of the police, Dragonfly takes pity on him and brings him along to join the clan. Together they set out to fight the alien creatures and prevent evil forces from wielding the instrument known as ‘The Destroyer of Worlds’.

The film is divided into six chapters, not unlike a classic wuxia novel. The opening action scene sets out the stall for the craziness that follows in this movie, with Aarif Rahman having a rooftop chase and sword fight with a giant CGI goldfish. Having said that, the chase is played out just as seriously as if it were any other wuxia movie.

When our heroes face a winged demon, the choreography is dictated by the CGI and 3D effects, which are quite impressive. It is much the same case when the Wuyin Clan face the Red Demon. Not a great deal of martial arts action, but lots of spectacular CGI. The demon itself has a touch of monster-effects maestro Ray Harryhausen, making me wonder if it was a deliberate tribute by Tsui Hark.

In a subsequent fight with an incredible looking “neon phoenix”, the special effects wouldn’t look out of place in one of James Cameron’s “Avatar” movies!

Action star and former Shaolin Monk, Xing Yu as the “Tang Clan Leader” leads a visually stunning scene, as he attacks a town with CGI rendered metal rings whilst Ni Ni as “Dragonfly”, fights him with her Wolverine style claw. It’s no surprise, as there is more than a hint of the “X-Men” movies in this sequence, with Xing Yu carving his way through the town like an ancient Chinese “Magneto”.

Ideal for 3D on the Big Screen

It must have looked very impressive on the big screen in 3D. There is a quite funny conclusion to the battle but it is a shame that someone of Xing Yu’s talent doesn’t get to show off more of his martial arts skills.

The Wuyin Clan must stand together

A fight in a forest features hints of traditional wuxia-movie choreography, but yet again the 3D CGI effects dominate.

I have to confess, I have never seen the 1982 movie “Miracle Fighters”, on which this is based, but when you see the names “Tsui Hark” and “Yuen Woo-Ping” attached to a big-budget blockbuster, expectations are naturally going to be elevated.

This modern version, even with all its spectacular visuals, initially “feels” like an early eighties Hong Kong period action comedy, with its broad humour. This soon evaporates into the fantasy fare of other similar 3D extravaganzas such as “Journey to the West” or “Wu Kong”. The CGI, although cartoonish in places, is still among the best I have witnessed in a Chinese movie. It must look absolutely breathtaking in 3D. That’s not to mention the beautifully constructed sets and Hans Zimmer-style music score.

These grand visuals are at once this film’s strength and weakness. They completely overwhelm every scene, to the point that there seems to be no space left for any meaningful action. It’s astonishing to think that this is a film directed by the master choreographer that is Yuen Woo-ping.

Part “Guardians of the Galaxy”, part “X-Men/Avengers” team up movie, fans of Chinese fantasy will enjoy the effects-driven comic/sci fi/wuxia story. Martial arts fans however, will be massively disappointed.

ENTER THE THOUSAND FACES OF FU in the FU-niverse with these Top 5’s, Top 10’s, exclusive interviews, try out your fantasy moves in KFK gear and subscribe to watch all manner of fight action from other dimensions come to life on YouTube!