When the clown prince of kung fu that is Jackie Chan dips his toes into darker waters, you know that he intends to leave a lasting impression of his versatility. Based on Stephen Leather’s 1992 novel “The Chinaman”, “The Foreigner” is a dark and morose, explosive revenge thriller of one man pushed to the breaking point that embarks on a quest for vengeance. With plenty of atmospheric tension and just enough action for audiences to feel like they’ve gotten the proper Jackie Chan experience, the film also sees Jackie give easily one of his best dramatic performances to date…

The living legend that is Jackie Chan steps into the role of Ngoc Minh Quan, and the expression he carries on his face throughout the film is probably the most weathered and world-weary look you’ll see anyone give all year. Playing opposite Jackie is former 007 James Bond, Pierce Brosnan as Liam Hennessy, a British government official who once fought in the Irish Republican Army (IRA).

Planning his next move

The day Ngoc lost everything dear to him

It’s just another day in London for Chinese restaurant owner and former special forces agent Ngoc Minh Quan, until his beloved daughter, his only remaining family, is killed in a bombing perpetrated by the newly reconstituted IRA.

Ngoc swiftly sets out to uncover the identities of the bombers and his attention soon turns to Liam Hennessy, a former IRA operative who now works as the British government’s Irish deputy minister. Although Hennessy insists that he no longer has any knowledge of or connection to the IRA in its current incarnation, Ngoc believes he knows more than he’s letting on. Hennessy soon finds himself pulled right into the centre of Ngoc’s quest for vengeance on his daughter’s killers. 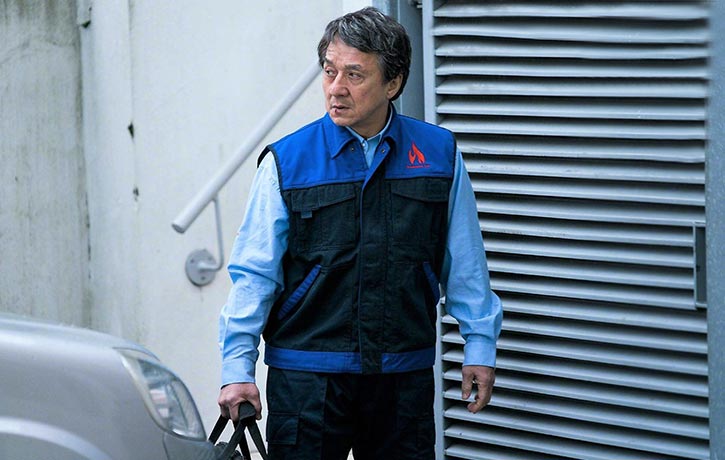 Jackie Chan in The Foreigner

It’s certainly unusual to praise a Jackie Chan movie not primarily for the very elements that made him the megastar he is today, but the strongest attribute of “The Foreigner” really is seeing the performances of Jackie and Pierce Brosnan’s, both individually and alongside one another.

Rarely, if ever, has Jackie been this sullen or downtrodden in his entire career. When you see the expression he wears on his face for most of the film, it’s convincingly the look of a man who’s got nothing at all left to live for, definitely not the kind of guy you’d want to see coming your way for payback of any kind. Brosnan is equally strong in his portrayal of Hennessy as a man seemingly trying to restore the peace after the IRA’s nineteen-year absence, while simultaneously trying to keep the lid on the dark secrets he’s sitting on.

As you can easily infer from the trailers, this is certainly one of the darkest outings of Jackie’s career – not quite as bleak and depressing as “Police Story 2013“, but certainly up there and even beyond the darkness of “New Police Story“. A British version of “Rush Hour” this I assure you, is not (though that certainly wouldn’t be an objectionable prospect)!

Hennessy tries to keep London under control after the IRA returns

Ngoc lays a trap for his foes

With its revenge theme and terrorist elements, “The Foreigner” often harkens back to Arnold Schwarzenegger’s “Collateral Damage” (indeed, with some surely unintended parallels, given recent tragic events in the UK).The film is a government conspiracy thriller, first and foremost, which leaves a lot of Ngoc’s revenge mission to be more tracking and tactical planning before actually getting the chance to settle the score with his foes. Using his skills from his special forces days, Ngoc’s takes an almost guerilla warfare approach to getting the answers he seeks from Hennessy, and while he takes care not to inflict unnecessary harm to any pursuers unconnected to his daughter’s death, his methods of planting bombs in Hennessy’s office or laying “Rambo”-esque traps for his bodyguards in the woods arguably makes him a domestic terrorist himself, even if we’re rooting for him every step of the way.

While the film is a political thriller first and an action movie second, director Martin Campbell knows that no Jackie Chan movie would be complete without some kung fu, and like the rest of the film, the action is a departure for its leading man. Campbell famously resurrected the James Bond series not once but twice with 1995’s “Goldeneye” and 2006’s “Casino Royale” – the latter of which single-handedly set a new standard for the series with its opening parkour chase – and under his direction, the film is less “Drunken Master” and more “Jason Bourne”.

While Jackie has scaled back his daredevil stunt work, owing to his age and the fact that he’s broken nearly every bone in his body a dozen times over, it’s still amazing to see the kind of vigour and raw energy he brings to the fight sequences in the film. 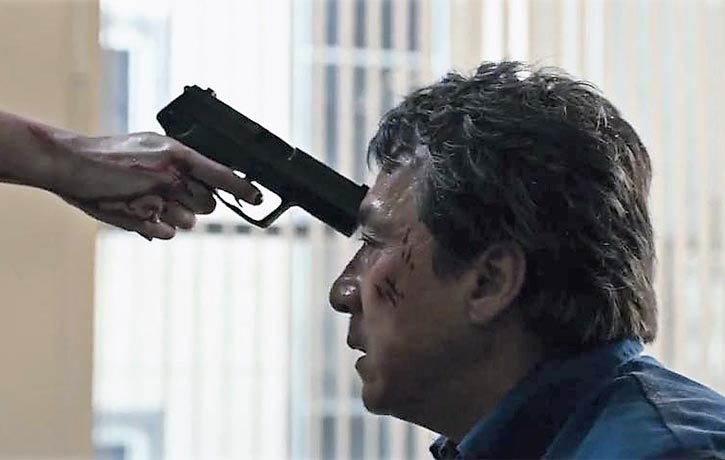 Odds are stacked against this foreigner 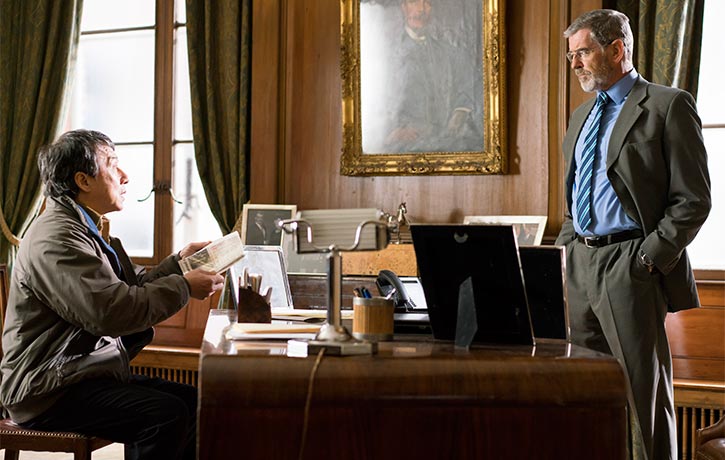 Ngoc believes Hennessy can lead him to his daughters killers

Fitting for the film’s darker nature, the action feels violent and punishing in a way not often seen in most of Jackie’s work. That’s especially true of the fight sequences in Ngoc’s encampment in the woods outside of London, including a vicious knife fight with Hennessy’s assassin nephew Sean, that resembles something more out of “Headshot” than a Jackie Chan movie. Indeed, Jackie probably fires more bullets in this film alone than throughout the rest of his filmography combined, which is Ngoc’s preferred method of killing when he finally tracks down his targets. But naturally, a Jackie Chan film can only properly conclude with a kung fu-driven showdown, and once again, Jackie plays against his type here while absolutely giving viewers their money’s worth!

While many viewers may find Jackie Chan’s brooding urban vigilante an acquired taste, “The Foreigner” is most certainly a dish well worth sampling. His and Pierce Brosnan’s performances of two equally but oppositely determined men alone are worth seeing and Jackie serves up a different, more visceral style of action than what he’s known for. We may not have any outtakes to wince over this time, but “The Foreigner” shows that Jackie Chan is still on top of his game!