We were pleased to see “Star Wars: The Force Awakens”, the latest instalment in one of the most popular movie franchises of all time.

The original Star Wars film back in 1977 had strong martial arts influences. Elements of the film were inspired by the Japanese Samurai film “The Hidden Fortress“, directed by Akira Kurosawa and starring Toshiro Mifune. Mifune even apparently declined the role of Darth Vader! The light sabre combat was heavily-based on the art of Kendo, with Darth Vader’s costume and helmet resembling those of a Samurai warrior. Even the film’s spiritual beliefs about the mythical “force” were akin to many martial arts philosophies.

When the films returned to the big screen as prequels in 1999, creator George Lucas again looked to the martial arts. Wanting to show the Jedi and the Sith masters at the peak of their powers, he found just what he was looking for in wushu champion Ray Park. The British martial artist possessed the acrobatics and weapon skills to take light sabre combat to a whole new level.

The Art of Light Sabre Fighting:

Fast forward to 2015, and the martial arts influences are back. The new movie features the Indonesian stars of “The Raid” films, Iko Uwais, Yayan Ruhian and Cecep Arif Rahman, although you won’t witness any Pencak Silat here. Without giving too much away we can reveal that, as you might expect in a modern-day action film, the hand-to-hand and weapons combat is quite raw and a big move away from the highly-stylised choreography of the prequel episodes. Daisy Ridley as “Rey” is especially good in her role as an action heroine.

That’s not the end of the story though. Filming of the first of the Star Wars spin off movies “Rogue One” is currently taking place in the UK with none other than Donnie Yen taking a leading role. We cannot wait to see what he can add to the legacy of Star Wars martial arts when the film is released in late 2016!

Rey is confronted by Kylo Ren 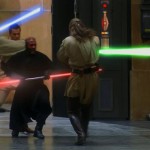 Ray Park in his most iconic role

John Boyega tries his luck with a familiar weapon

The latest fights have a raw energy

Daisy Ridley is impressive in the combat sequences

Darth Maul watches his back