Has it already been five years since the Marvel Cinematic Universe released their superhero mega-crossover event “The Avengers”? Time certainly does fly, as they say and in that time, we’ve not only seen Earth’s Mightiest Heroes meet up on the big screen not once but twice, but the larger MCU has continued to expand exponentially, as evidenced by their many Netflix series following the adventures of Men Without Fear, bulletproof ex-cons, superpowered private investigators, and Immortal Weapons. That could only mean that another team-up, a “street-level Avengers” if you will, was inevitable and after all the obligatory build-up, “The Defenders” arrives to prove that the MCU hasn’t lost its ability to deliver superheroic fun and thrills of the highest order!

Matt’s love interest and best friend, Karen Page and Franklin “Foggy” Nelson are both once again portrayed by Deborah Ann Woll and Elden Henson, while Elodie Yung is also back as his previously deceased ex-girlfriend Elektra Natchios. Also returning are Ramon Rodriguez as Danny’s old nemesis Bakuto, Wai Ching Ho as his and Matt’s previous adversary, the nefarious Madam Gao, and Carrie Ann-Moss as Rand Enterprises lawyer Jeri Hogarth. Our heroes also find themselves further opposed by the mysterious and sinister ally of Madam Gao, Alexandra, a powerful leader in the evil ninja clan known only as “The Hand”, played by none other than the great Sigourney Weaver!

Colleen and Claire get Luke and Danny to settle things

Danny brings on the big gun

Danny and Luke have a slight misunderstanding

The Defenders are taken by surprise

Following a brutal assault on K’un Lun, the mystical other worldly city he’s sworn to protect as the Immortal Iron Fist, Danny Rand has dedicated himself to wiping out The Hand, the centuries-old ninja clan responsible for the attack on his city, aided by his close ally, Colleen Wing.

However, they return to New York City just in time for an inexplicable earthquake that can only be the work the very foes they’ve pursued across the globe. Their attempts to get to the bottom of the situation are further complicated when they cross paths with bulletproof ex-convict Luke Cage, who’s out to protect the denizens of Harlem. Before long, they also run into private investigator Jessica Jones, along with blind lawyer Matt Murdock, now retired from his double life as Hell’s Kitchen vigilante known as Daredevil, each of them on a parallel mission to Luke and Danny’s.

While Matt, Luke and Jessica all prefer to work alone, Danny sees the potential of the four of them together to put an end to The Hand once and for all, and ultimately, the group realizes that they’re the only hope for the city after uncovering The Hand’s plot to unearth an otherworldly power buried deep underground that could spell doom for New York City if it falls into the wrong hands.

The hype of the series serving as a “street-level Avengers” proves to be another feather in the cap of the MCU with “The Defenders”. The series easily carries over the team-up dynamic and character interplay of Marvel’s first big crossover, and no one’s favourite character is short-changed or under-utilized. Although, with that said, the involvement of The Hand as the central villains and Danny serving as the lynch pin in their plot effectively puts the spotlight on both him and Matt as the most central characters in the story.

Indeed, after fifteen years a monk in K’un Lun, Danny is noticeably transformed by the show’s conclusion, re-evaluating his approach to his mission and re-acclimating to life in New York not unlike Captain America’s process of adapting to the 21st century after decades encased in ice.

While every bit a team-up as “The Avengers”, the series does effectively function as “Iron Fist” season 1.5, and to a lesser extent “Daredevil” season 2.5. That’s not at all to say that Luke or Jessica are kept in the background in the least; each Defender has his or her own character arch that brings them together in an organic way and carries through to the very end.

Luke and Danny are ready for action

Elektra leaves none of her enemies the chance to escape

While the show has no shortage of things to praise, its weakest point, Jessica Jones does emerge as the Achilles heel of the series’ first half, specifically her inability to make it even five minutes without throwing some snotty remark at the feet of Matt, Danny, or even her own ex-lover, Luke. Her solo series set her up as someone with a traumatic past and a serious chip on her shoulder, but she ramps up her misanthropy in the first half of “The Defenders” to such a degree that even Stick seems less grumpy by comparison. Things fortunately get better in the latter four episodes when she lightens up, and it’s a much-needed return to her portrayal as a deeply wounded but clearly caring person seen in her eponymous series. Nevertheless, the strengths of “The Defenders” are far too many for that to be a serious hindrance.

The abundant action sequences of the series are everything fans of the characters had hoped for and more. Danny’s kung fu skills in particular are significantly better realized than in the hit-and-miss fight sequences in his flawed but underrated solo show, and the series knows just how to bring such well-known allies as Danny Rand and Luke Cage together for the first time, pitting them in an ally fight where, after stonewalling everything Danny can throw at him, Luke’s superhuman durability finally meets its match in the form of the Iron Fist.

The Defenders are ready to roll!

Like “The Avengers”, the series treats viewers to a decent amount of in-fighting among the heroes themselves, including another blazing smackdown between Danny and the team’s born-leader Matt when their respective strategies for battling The Hand part ways. Of course, it’s not a Marvel-Netflix show without a hallway brawl, and “The Defenders” delivers the goods here in a battle that brings each individual character to The Hand’s HQ for different reasons, and builds from Danny battling The Hand solo to Luke literally crashing the party, to Matt and Jessica finally joining in just as Elektra drops by. 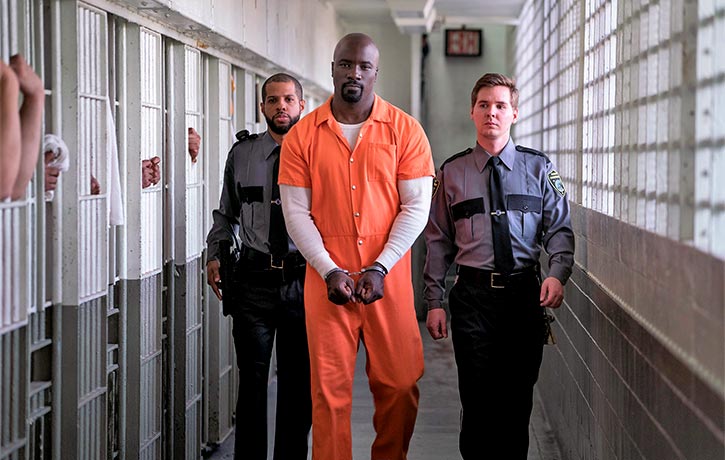 Luke was meant for more than life inside a cage

Danny and Colleen stand strong together

Matt comes to recruit Jessica to The Defenders

Elodie Yung is even more at home in her role here than in season two of “Daredevil”, and with The Punisher soon to break out in his own Netflix series, one certainly hopes that Elektra will soon get the solo treatment herself. You certainly don’t hold your own side-by-side with Sigourney Weaver on-screen if your screen presence is lacking, and you’ll certainly be surprised at where the show takes both Elektra and Alexandra by the end. Like any great superhero series, “The Defenders” throws everything it’s got at you in the finale. While the subterranean setting does keep the lighting a little on the dark side (helpfully illuminated by Danny’s glowing fist), it’s nevertheless a sight to behold as the camera sweeps through the battle to capture The Defenders opening a fresh can of glorious butt-kicking on The Hand! 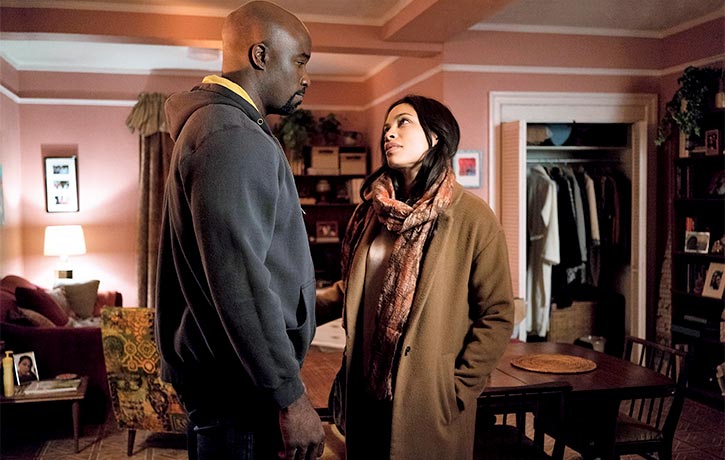 Claire Temple is the greatest ally of The Defenders

Jessica brings her detective skills to The Defenders

Marvel touted their Netflix crossover as a “street-level Avengers”, and by the end, “The Defenders” has thoroughly made good on that promise. Every character gets their moment to steal the show in spectacular and thrilling action sequences, with plentiful comic relief, including an episode-long riff on “The Avengers” shawarma scene, and all have the next season of their respective solo series set up for maximum greatness. However, we’re still awaiting that obligatory Stan Lee cameo in this particular corner of the MCU. Ahem…Marvel, Netflix, please get on that.

Got something to say about “The Defenders”? Tell us and join in the conversation on Facebook or Twitter!

Jackie Chan Triple Feature and Q&A at 2017 Beyond Fest!