To call “The Art of Self-Defense” “cerebral” doesn’t even come close to doing justice to that term, or to the film itself. Under the keen direction and penmanship of Riley Stearns, “The Art of Self-Defense” is a razor-sharp, meticulously well-crafted black comedy that dissects the factors that motivate novice martial artists while placing the very concept of masculinity under the microscope. The fact that a film this lean on action can unequivocally qualify as one of the best martial arts films of 2019 is testimony to its multi-layered script and masterful performances by its principle cast, all of which combine to form one of the most intellectually satisfying movie-going experiences in years.

Jesse Eisenberg assumes the role of the film’s timid leading man, Casey Davies, who becomes a student of The Art of Self-Defense under the tutelage of a perpetually poker-faced Sensei, played by Alessandro Nivola. Imogen Poots also tackles the pivotal role of Casey’s fellow student, Anna, who finds herself in an increasingly frustrating training purgatory due to her mentor’s rather casual sexism. Steve Terada also appears as Thomas, one of Sensei’s higher ranked students, while David Zellner portrays Casey’s naïve but eager fellow student, Henry.

There’s not much to say when it comes to the life of Casey Davies, a timid accountant who constantly disappears from view in the employee break room, with his loyal dachshund being his only real source of companionship.

Anna is the strongest student in Senseis dojo

Sensei takes his newest students through the fundamentals of Karate

Casey is nervous on his first day of training

After Casey is assaulted during a trip to the grocery store one evening, he at first thinks that purchasing a handgun will solve all his problems. However, he soon decides that it’s his own sense of self-worth that needs fixing and joins a local Karate dojo. Casey swiftly gains a newfound sense of confidence under the tutelage of his new Sensei, who insists on only being referred to as such, and from training alongside his fellow student Anna, perpetually stuck at brown belt despite obviously being the dojo’s best student.

However, as Casey graduates to yellow belt and joins the dojo’s “night class”, he soon learns that Sensei’s methods are far more unconventional than he previously thought.

If an ode to “The Karate Kid” is what you’re expecting to see in “The Art of Self-Defense”, guess again. The epic training montages seen in most master-student films are AWOL, what fight sequences there are in the film are more unsettling than exhilarating, and our protagonist’s stone-cold Sensei is more Tyler Durden than Mr. Miyagi. And every single one of those characteristics works magnificently in the favor of “The Art of Self-Defense”. The film is as deeply invested in the “Why?” of martial arts as the likes of “Enter the Dragon”, “Bloodsport”, or “Best of the Best”, and yet it’s completely dialogue-driven and is, if anything, an anti-action movie.

My house is this big

Casey wanders into the dojo a man at the mercy of his own social anxieties and innate awkwardness, only to be taken under the wing of a mentor who embodies everything he wishes he was, a man who can snap an opponent’s arm like a twig and who never seems less than a thousand percent confident in every move he makes.

It takes all of one class for him to be completely seduced by the newfound sense of confidence his martial arts studies instill within him, and before long, his co-workers and beloved dachshund are completely taken aback by the backbone that the dweeb they once knew has grown, almost overnight. Jesse Eisenberg steps right into his trademark groove of a timid geek yearning to be an alpha male, while Alessandro Nivola’s understated performance as Sensei fits his comedically stoic character like a glove, and every scene between the two is a smile-inducing, delicious cocktail of deadpan humor cross-pollinated with awkward silence.

Anna and Thomas hang onto Senseis every word 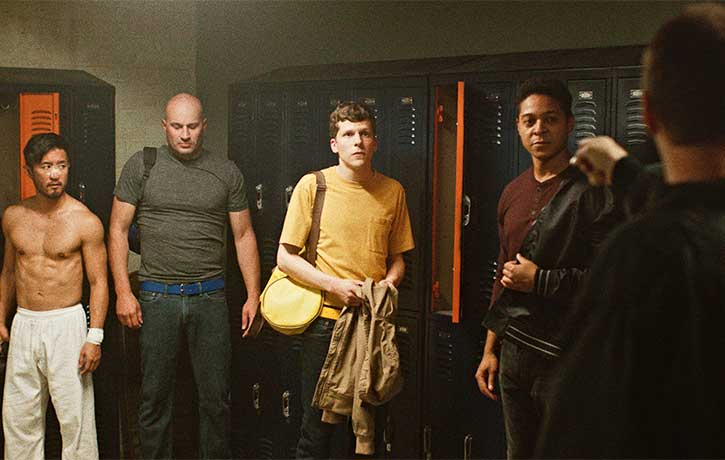 Casey is introduced to a new training method at night class

Time to strike out

For as much as the film is a deep dive into the philosophy of martial arts, it’s as much a deconstruction of masculine identity. Casey sees himself an emasculated wimp and sees in Sensei the possibility of making a man of himself. Sensei, meanwhile, regards masculinity in its harshest, most unforgiving terms, something Casey discovers when he graduates to the dojo’s fabled “night class”, and this is really where the character of Anna fully comes into play.

She’s clearly the dojo’s most skilled student by far, something made abundantly clear in the film’s most memorable and downright horrific fight sequence, yet she’s stuck at brown belt in perpetuity simply because Sensei doesn’t think a woman can ever truly master martial arts.
Through the three main characters, “The Art of Self-Defense” offers a different lens of masculinity in each one – Casey is desperate to be a man, Sensei thinks he’s cracked the code on what it takes to be one, and Anna wants to be taken seriously by the men around her. And both Casey and Anna believe they can only reach their respective goals by following the example set by Sensei, only to become gradually more disillusioned by the model he offers.

Of course, the film gets all of this across in a far more comedic manner than any of that sounds, all of it leading up to a shockingly blunt conclusion that is the film’s mic drop of uncomfortable yet undeniably hilarious humor.

Sensei remembers his own mentor in martial arts

“The Art of Self-Defense” is a true gem of unapologetically dark humor, a black comedy that’s as endlessly fascinating as it is sinister in its hilarity. Jesse Eisenberg and Alessandro Nivola are equally captivating and hilarious in their pairing as a dork who thinks he’s found the wisest sage on Earth, while Imogen Poots channels equal amounts of both in a pivotal supporting role.

While the film opts to go light on the action, it uses what fighting it does have to full, disquieting advantage. It zeros in on the mental empowerment martial arts provides alongside its sly commentary on what happens when the idea of being a macho-man is taken too far. It’s dark, it’s clever, and it awakens uncomfortable laughter in all the ways a finely-polished black comedy should – “The Art of Self-Defense” is
this generation’s “Fight Club”!

Lax at the office

“The Art of Self-Defense” is set to release in theaters on July 12th. This is so refreshingly different; a martial arts black comedy, and we guarantee you’ll find it hard to keep your tongue-in-your-cheek! (We almost thought Master Ken was going to make an appearance…) What are some of your favourite kung-foolish comedy moments? Let us know in the comments below; Like, share and join in the conversation on Facebook and follow us on Twitter & Instagram. Whether you’re feeling kung-fucious or kung-foolish, click to join the FUniversity of exclusive interviews, Top 10’s, grab your Official KFK gear and subscribe for more kung-furious action on YouTube!