Its funny how the same title sometimes strikes two different filmmakers twice thereby needing a little wordsmithing! Sammo Hung and Yue Song both fell victim to this conundrum when each decided to make a film titled “The Bodyguard”, thus making the alternate title of “Super Bodyguard” necessary for the latter.

Fortunately, what Song didn’t have to make any alterations to is the 90 minutes of breathtakingly awesome butt-kicking that makes up his sophomore outing as director and star. With the caveat that the film’s latter half is far better than its first, Yue Song’s “Super Bodyguard” is not only a major step up for him as a filmmaker, but one of the most action-packed martial arts films you’ll see all year!

For the second time in a row, Yue Song carries the dual roles of director and leading man in portraying the role of Wu Lin, while former Shaolin disciple and rising action star Shi Yan Neng portrays his embittered rival, Jiang Li. Both are students of the Iron Kick clan, something they both prove beyond a shadow of a doubt well before the end credits roll.

Wu Lin will never back down!

Li Yufei plays Fei-fei, the daughter of a wealthy businessman whom Wu Lin is tasked with protecting and it’s a task he’d certainly better be prepared for as Jiang Li brings a few dozen vicious henchmen to oppose him, including a hulking giant played by Jiang Baocheng. Hong Kong action fans should also keep their eyes peeled for cameos by Wai-Man Chan and Collin Chou too!

The “Iron Kick” clan has one last successor in the form of Wu-Lin, who after the death of his master, is the only student to have attained complete mastery of the 108 kicks. After heading into the city from his peaceful village, Wu Lin reconnects with his fellow Iron Kick student Jiang Li. While they were once like brothers, Jiang Li still harbours some resentment towards Wu Lin for the favouritism their master displayed towards him.

Jiang Li prepares to attack with a Phoenix eye

A lot of training goes into making knuckles like those

Their divide only widens after Wu Lin comes to the rescue of a rich businessman who subsequently appoints him the personal bodyguard to his daughter, Fei-fei. Unfortunately, Fei-fei and her father become the targets of a criminal organization within the city, which Jiang Li happens to be an enforcer for. Wu Lin won’t back down from his mission to protect Fei-fei, but his steadfast resolve ultimately puts him on a collision course with the man who was once his blood brother.

Yue Song put himself and his cast through what looks like a metric ton of pain in the making of “Super Bodyguard”. You don’t need anyone connected to this film to tell you that more than a few of the hits you see them taking on screen are the real deal.

In every one of the film’s extremely frenetic fight sequences, Song does everything but throw the words “Let me show you what I can do!” in gigantic, neon flashing lights upon the screen -however by the end, it’s obvious that as both a screen fighter and action filmmaker, he’s truly got the skills to pay the bills.

Still, it must be pointed out that the film does take some time to find its footing, (mind the pun) and the first half has its share of clunky writing and less-than-successful attempts at comic relief, mostly in the form of Fei-fei’s attempts to rid herself of her newfound oddball of a guardian.

Jiang Li is simply ruthless in a fight

Wu Lin drops an axe kick on his foe

Fei-fei is just about the weakest character in the whole film and the cat and mouse game between her and Wu Lin starts to get grating after a while. Fortunately, there’s enough action sprinkled throughout the first half to dampen the impact of these lesser elements, including a chase sequence where Fei-fei gets snatched up into a van with Wu pursuing her captors on foot, culminating in him leaping feet first through the windshield as the van charges directly at him. That old Jackie Chan standby of playing a stunt back two or three times is cleverly utilized here, just to show off the legitimacy of the stunt and the kind of guts the film’s star-director has to try it.

While the film is somewhat of a hit and miss affair in its first half, it absolutely roars to life in its second with a virtually ceaseless avalanche of fights, stunts, and Wow! moments. Shi Yan Neng excelled as a first time lead in 2013’s “The Wrath of Vajra“, and brings an equal level of potency to the role of the somewhat tragic villain, Jiang Li. 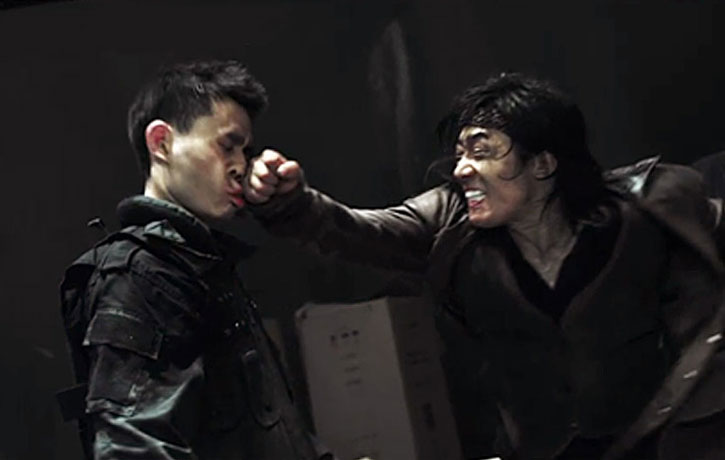 Wu Lin performs so reconstructive surgery on his enemys face

Never play chicken with Wu Lin unless you want to lose 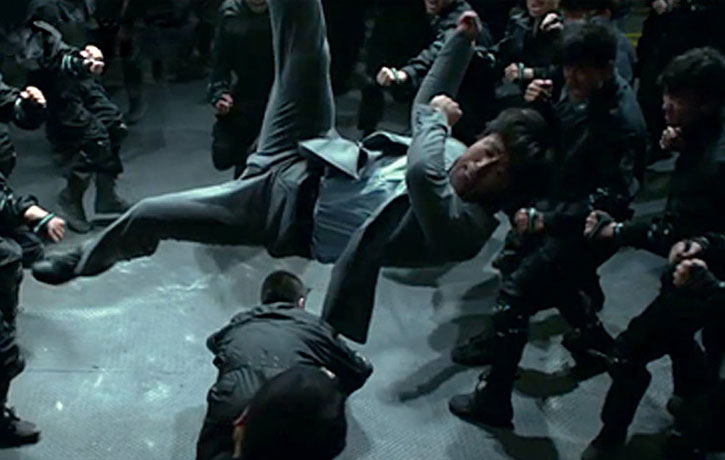 Wu Lin gains on the evildoers

He’s simply a beast and his first match with Song is where the film really starts to kick into high gear. Song’s true cred as a filmmaker shines through here, as well. He’s extremely adept at enlivening the action on-screen with all the tools of the trade, from cinematography to the soundtrack, working in tandem to keep the audience constantly invested on an emotional level in what’s happening before their eyes.

The soundtrack in particular is one of the best produced for a Chinese martial arts film in a pretty long time, especially in Wu’s epically brutal smackdown with a cadre of Jiang Li’s henchmen. The soundtrack emphasizes the desperation of his struggle there and it totally flips on its head when Wu storms the enemy’s fortress to battle his way past no less than one hundred men.

Wu Lin hangs on for a wild ride 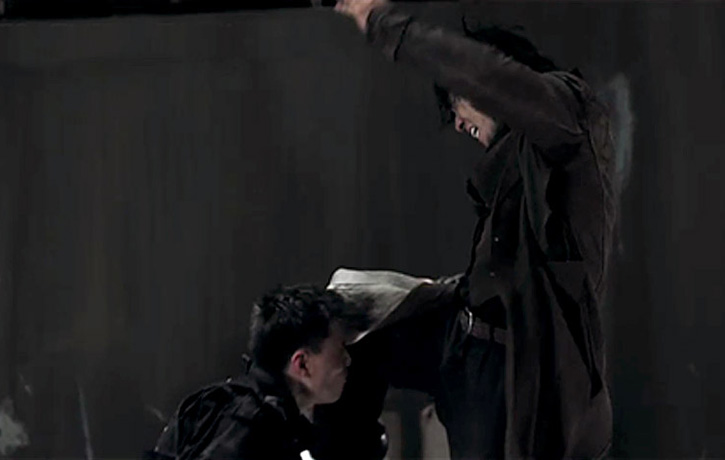 Wu Lin trains by a mountainside

There’s a foot slamming into a human head in slow motion at least once every three seconds here and by the end, the thought that Song just might fulfill the trailer’s boast of him as the next Bruce Lee will probably cross at least a few minds (then again, the next Van Damme isn’t out of the question either, since Song is always in a full split any time he’s sitting down in the film).

Song was certainly paying attention to Bruce Lee’s speech about the need for “emotional content” as the finale’s got plenty of it even in the midst of a blazing final duel between him and a metal-glove wielding Shi Yan Neng.

OK, so while it’s a tad shaky in its first half, “Super Bodyguard” is a hard (and I do mean HARD!) hitting martial arts spectacular in which its star-director emerges as one of the big blips on this year’s action-fu radar. Yue Song is dynamo in front of the camera as well as behind it and with his return to the villain’s chair, Shi Yan Neng makes quite a compelling case that no Chinese remake of “The Raid” should be green lit if he’s not playing its Mad Dog. Actually, it’d probably be best to let Song tackle that one, too! 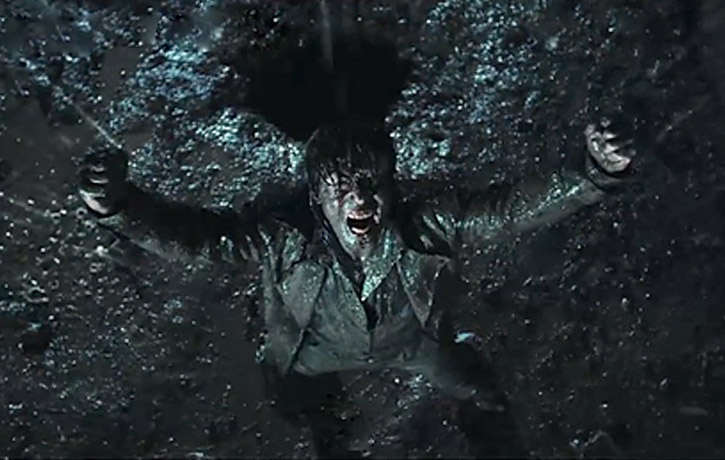 Wu Lin takes down an enemy

Wu Lin fells his enemy with a roundhouse kick