A fight biopic like no other. Whereas many such real-life stories see the fighter proving their worth whilst battling their way out of poverty, this touching true story of Parinya Charoenphol aka Nong Toom depicts a truly courageous battle of identity and acceptance.

Young Muay Thai fighter Asanee Suwan makes a powerful award winning cinematic debut as Parinya “Nong Toom” Charoenphol. Struggling to keep his gender identity under wraps, he is ably supported and encouraged by his strict yet accepting boxing coach Pi Chart played by Sorapong Chatree. Playing Nong Toom’s troubled parents are Orn-Anong Panyawond as his caring more understanding mother, and Nukkid Boonthong as his father, while Stiporn Niyom plays Nong Toom’s brother Nat. Japanese wrestler Kyoko Inoue plays herself in a recreation of her famous fight with Nong Toom in 1998. Keegan Kang is Jack, the reporter rescued by Nong Toom and whose interview with the now fully female boxer forms the film’s narrative.

Told through flashback the film recounts the real-life story of Parinya Charoenphol aka “Nong Toom”; the early struggles with his female identity, relationships, family, and the hard battles he fought as a champion Muay Thai fighter to fulfil a lifelong dream of transformation and acceptance.

Director Ekachai Uekrongtham (who later went on to direct “Skin Trade” with Dolph Lundgren and Tony Jaa) skips through Nong Toom’s childhood focusing instead more on his emergence as a fighter. This opens the film up for plenty of in-ring action featuring a mix of gritty realistic Muay Thai bouts and training montages with a stylised touch.

The fighting lies at the heart of the film and is used effectively as a storytelling tool depicting Nong Toom’s multiple struggles, which, combined with her own narrative descriptions of each fight, provide plenty of gravitas and insight into her character; someone who dares to confront her true self and thrust it unto a prejudicial world not easily accepting of change.

Nong Toom fights for her dream

The action features plenty of intense training sequences and brutally balletic pure displays of Muay Thai in all its shock and awe glory. Although they seem cliché – ripped out of Hollywood almost, these serve as much a social commentary as they do action-packed entertainment. The inclusion of real life Muay Thai fighters (Asanee especially) adds intense realism as each elbow, knee, punch and kick, hits with an ear shattering crunch. Fight arranger Sanae Taptimthong packs in a rich variety of recognisable Muay Thai techniques from the classic straight legged round kicks to an assortment of stunning aerial knees and elbows that became the real Nong Toom’s trademark manoeuvres.

Nong Toom kicks to impresss in her first fight

The matches are edgy and realistic with all the exhilaration of a real match whilst the stylish slo-mo’s dramatically emphasise the devastating impact of Nong Toom’s kicks and flying elbows.

Whilst the Muay Thai combat scenes entertain and tell the story, Nong Toom’s exhibition match with wrestler Kyoko Inoue is one the film’s most poignant scenes. The match itself though not a faithful recreation is shown as an almost circus-like spectacle putting perceptions of femininity front and centre; we’re caused to question the rationale of putting a transgender male boxer against a heavy set female wrestler. Nong Toom questions his own reasons for the fight and leaves anyone watching with questions of their own.

Trademark elbow to the jaw

“Beautiful Boxer” seamlessly combines the underdog sports movie with a modern transgender fairy tale twist, clichéd at times, exploring stereotype and refusing to indulge in them. The fight scenes are powerful and exciting, interspersed with the relationships forged along the way bringing some emotional feel and heart – warming moments to this incredible story of an amazing woman.

At the centre of it all is the blazing visceral core that is Asanee Suwan’s award winning performance as Nong Toom portraying the character’s simultaneous sweetness and toughness (the yin-yang polarity) with a subtlety that confounds the traditional notions of “masculine” and “feminine”.

Even the mighty Inoue is no match for Tooms powerful kick 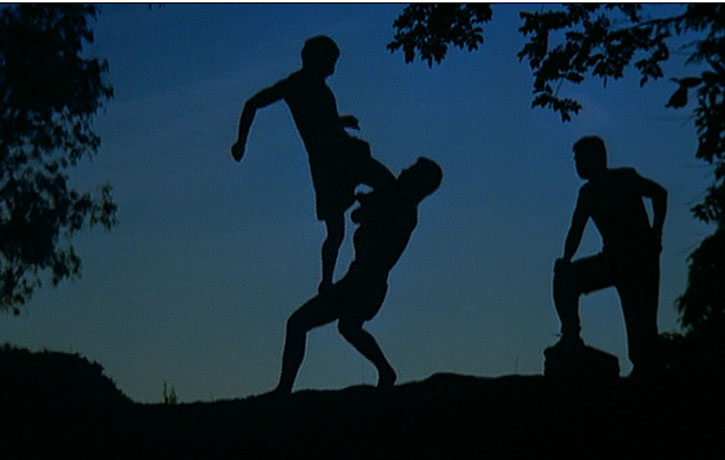 Toom and Inoue grapple for the crowd

The crowd embrace their new champion