The “Die Hard” formula has been put to work in action movies since time immemorial (or, more accurately, 1988), and “Sanak” is the latest to put it to use with fantastic results.

Anchored by Vidyut Jammwal’s charisma as an action hero and out-of-this-world martial arts fights, there’s no argument that “Sanak” is one of the best action movies of 2021!

Vivaan and Anshika learn she must undergo an operation

Security guard Riyaz Ahmed Motlekar is played by (funnily enough another) Chandan Roy, with the role of the young Zubin played by Harminder Singh Alag, whilst terrorist Ajay Pal Singh is played by Kiran Karmarkar.

MMA trainer Vivaan Ahuja’s arrival at a Mumbai hospital was supposed to be nothing more than picking up his wife Anshika from her recovery after a heart operation.

Unfortunately, it happens to be the same hospital that terrorist and arms dealer Ajay Pal Singh is recuperating in after his capture by authorities.

Ajay’s team, led by his right-hand man Saju Solanki, arrives to retrieve their incarcerated leader, holding dozens of people hostage in their plot, including Anshika.

Mapping out the logistics

With the cops led by Captain Jayati Bhargav arriving on the scene to try to put a stop to the hostage situation, it’s up to Vivaan on the inside to stop the terrorists and rescue Anshika…and all the hostages.

“Sanak” might have benefited from a bit more time with Vivaan and Anshika before the hostage situation kicks in, with the romantic chemistry Vidyut Jammwal and Rukmini Maitra show from the film’s first scene. However, “Sanak” is like the best Olympic gymnast in the world that just can’t wait to show off what they can do.

“Sanak” is the latest collaboration of Vidyut Jammwal and action director Andy Long Nguyen, and it’s as golden a partnership as action movies currently have right now.

The action scenes of “Sanak” are like Jackie Chan meets “The Raid”, a combination that never seemed like it was on the cards, but now absolutely MUST be used to its fullest with how well “Sanak” demonstrates this vehicle’s potential.

Every punch, kick, dodge, and deflection is swift, precise, powerful, and uncompromising, while every tool Vivaan can get his hands on is also a weapon of war, from elastic bands to barbells.

The first big action scene in Vivaan’s knife fight with one of the terrorists in the hospital parking garage is a home run on its own with Vivaan employing a car’s hub cab as his shield, but that’s just the appetizer to martial arts battles that only get more elaborate and intricate as the movie progresses.

Each action scene in “Sanak” also makes an effort to stand on its own with its own gimmick and unique elements.

In one duel, Vivaan uses an MRI machine to disarm his enemy’s gun to go hand-to-hand to, in the next, matching his fighting skills against the swift kicks of several henchmen, luring them into a supply closet to level the playing field.

The movie also keeps the stakes high and surprising, with Vivaan always having to figure out how to take his enemies’ firearms out of the equation and Jayati’s daughter being a hostage cruelly weaponized by the terrorists.

Vivaan’s allies, in trying to save the hostages and Anshika, Riyaz and Zubin, also add to rather than weigh down the mile-a-minute pace of his efforts to navigate the situation, while Saju’s villainy is darkly vicious, something the movie’s most chilling scene drives home.

By the finale, “Sanak” is throwing everything it’s got at the wall, and unlike the desperation such an endeavor usually implies, everything sticks with incredible martial arts fights stacked on top of each other, with several of them being worthy of being dubbed among 2021’s best.

Hostages try to manage their sanity shades of Die Hard

“Sanak” is what Hong Kong action fans live for dropped into the heart of Bollywood with the best Kalari exponent in action movies today.

It frankly might be the best highlight reel of Vidyut’s talents as an action star and Kalaripayattu master yet, and transplants the “Die Hard” formula into a hospital setting superbly well.

With Andy “Long” Nguyen’s fight choreography, Scott Adkins’ endorsement of him as “The new Jackie Chan” is just the cherry on top of work that speaks for itself. Whichever streaming platform is carrying it in your country, the whirlwind blast that is “Sanak” awaits you O’ die hard action fan!

Die Hard in a hospital

A moment of tense relief 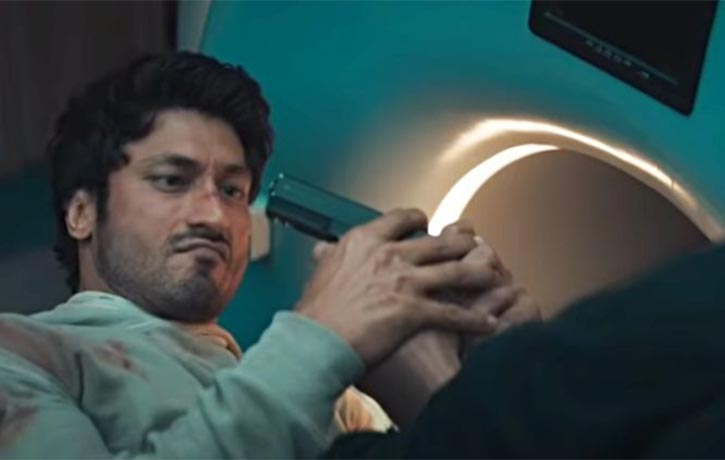 “Sanak” is available to stream via Disney+ Hotstar & Hulu!

Have you seen “Sanak”? What did you think of leading man, Bollywood superstar Vidyut Jammwal’s fighting skills as portrayed in the fight scenes? Do you think India has finally nailed their recipe for martial arts movies? What do you expect next from real-life Kalaripayattu expert Vidyut Jammwal? Let us know in the comments below, join in the conversation, share this on Facebook, and follow us on Twitter & Instagram!

When HOPE is UNDER SIEGE, and YOUR DREAMS are HELD HOSTAGE, it’s time to IGNITE YOUR MARTIAL HEART and GET STUFF DONE with help from the KINGDOM of FU, our MMA series, these Top 10’s, Top 5’s, in-depth interviews, stay ALL-FIRED UP in KFK gear this Xmas and subscribe for more far- EASTERN and near-WESTERN FU on YouTube!