Randy “The Natural” Couture is an era-defining MMA fighter. He created of many of the benchmarks of greatness that mixed martial arts athletes of today strive towards.

A six-time UFC Champion across multiple divisions, Couture was the first fighter to win UFC titles in multiple weight divisions. Additionally he’s the only person over the age of 40 to have won a UFC Championship fight, doing so four times.

Born June 22, 1963 in Everett, Washington (USA), Couture was a 3-time All-American for Oklahoma State University. After College he joined the 101st Airborne division and attained the rank of Sergeant.

During and after military service, Couture had Olympic Greco-Roman wrestling ambitions. He went on to become an alternate for three Olympic teams.

Now 58, “The Natural” came late to the MMA game having had his first fight at the age of 34. Despite that, his records continue to stand out.

At one point he had the most wins in heavyweight championship bouts and the most wins in title fights. His achievements and continued innovative improvements deep into his forties changed the perception of stylistic adaptation in MMA.

On so many counts, Couture brought a game-changing impact to MMA in the formative years of the sport. As a Greco-Roman wrestler, Couture’s grappling style focused on upper body clinching as opposed to the more common leg attacks from Freestyle wrestling.

He parlayed this style into the clinch-boxing style of tie-ups and inside fighting which have become a cornerstone of the modern MMA game.

Couture co-founded Team Quest that produced legends including Dan Henderson and Chael Sonnen. After that, Xtreme Couture was formed, home of current Heavyweight Champion, Francis Ngannou. Yet despite this legacy, Couture is rarely mentioned in UFC media.

Randy was Heavyweight Champion when Zuffa, LLC became UFC owners. He challenged the contract structure and sought better rights for fighters. Resultantly he fell out with the UFC hierarchy.

He has continued to push for better fighter rights and has resultantly been omitted from a lot of UFC coverage. The influence of Randy Couture as a fighter, coach and MMA advocate is undeniable and he definitely deserves greater recognition.

It was a fight that fans had been wanting to see throughout the careers of the two athletes.

In round 1, Couture was initially content to keep the fight standing and lands clean, straight right hands.

At 3:10, a Couture right wobbles Coleman as “The Natural” follows up with knees to the head. Sharp uppercuts in the clinch prevent Coleman from working free, and he has no answer for Couture’s pressure and clinch striking.

Couture backs Coleman up to the cage by stepping in with a left hook. He then muscles him down to the mat, sliding straight into mount.

Couture’s heavy strikes force Coleman to turn to his back. With his hooks now in, Couture quickly gets under the neck. Coleman tries to defend by fighting the hands but the squeeze is too tight as he fades to unconsciousness.

Referee, Steve Mazzagatti separates the fighters at 1:09 of round 2, to declare victory for Randy Couture via rear naked choke.

This was a heavyweight tournament eliminator bout.

Vitor Belfort incredibly had finished every one of his previous opponents with strikes in the first round.

In round 1, Couture feels Belfort’s power early on when a sharp left hand connects. As they clinch up and Belfort looks for a double leg, he rips Couture’s shorts.

Couture struggles to control Belfort with collar ties and over under grips, and keeps pressing forward each time Belfort separates.

Ducking under a wild right, Couture gets a double leg takedown at 2:39. Having gotten to full guard from side control, Belfort stands back up but takes several knees on the way.

Couture refuses to give a moment’s space and lands several uppercuts from a collar tie. Belfort is sluggish, and several more clinch punches see him drop to his back.

Couture follows up with knees and heavy punches and then moves to back mount when Belfort turtles.

A continuous stream of punches rain down on Belfort as ‘Big John’ McCarthy calls for a response. With Belfort unresponsive, he steps in to call the fight at 8.16 of round 1 via TKO for Randy Couture.

Early in round 1, Randleman gets Couture down against the cage, but Couture is able to keep him close to prevent strikes, then switches his hips for an armbar attempt. He has wrist control but is unable to get the elbow past the hips to extend. Randleman gets a small slam and Couture re-guards.

In round 2, Randleman lands thumping left hooks and a right hand, but is unable to exert his grappling dominance once more when they clinch. Randleman again gets the takedown, and again, Couture is unable to work any space from the bottom position.

In round 3, Couture starts to tie Randleman up in upper body clinches. Each time Randleman looks for a takedown Couture pummels back inside, and follows up with a knee to the gut. Then lowering down, Couture gets an inside trip and then rains down strikes on Randleman.

He strikes to get to mount while Randleman tries to stay close to avoid strikes, but Couture frames him back to the mat, and exerts merciless blows on the now bloodied Randleman.

With Couture’s barrage of strikes meeting no opposition, referee ‘Big John’ McCarthy calls the fight at 4:13 of round 3, as a TKO victory. Randy Couture becomes the UFC Heavyweight Champion once again. 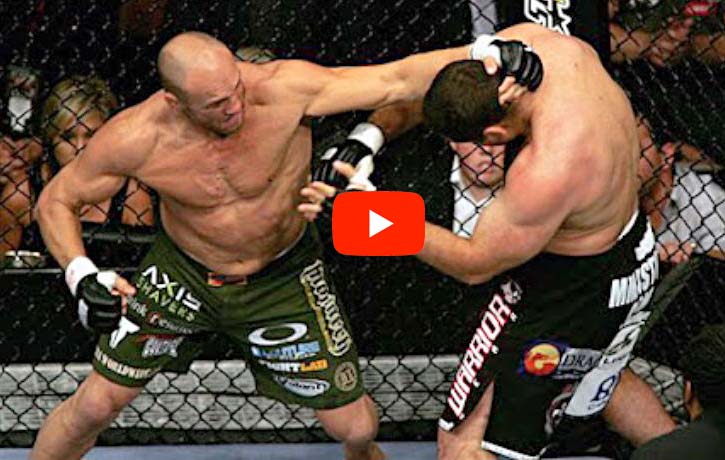 Couture had struggled in the past at heavyweight against younger, bigger fighters and many picked Gonzaga to win here.

In round 1, following a sharp left hook, Couture gets to Gonzaga’s back and drags him down early on. Gonzaga works back up but Couture refuses to break contact and lands a hard knee.

Couture gets a high crotch single and dumps Gonzaga down at 3:07. Gonzaga lands a crunching elbow as he separates from the clinch but Couture maintains his forward pressure. Now Gonzaga’s nose streams blood and he ends round 1 with a guillotine attempt.

In round 2, Couture resumes upper body clinching, and is able to land good hooks as they break. There is then a break for Gonzaga to have the blood wiped out of his eyes.

When the action resumes, a point is deducted from Gonzaga for holding the fence to prevent a takedown. Gonzaga now begins to wilt under Couture’s pace who now lands heavier strikes off the clinch.

As round 3 begins, Couture is clearly the fresher fighter, and opens with a heavy overhand right. A sharp head kick from Gonzaga sees Couture work back to the clinch and then get a takedown. Gonzaga covers up as Couture pummels him with unrelenting strikes.

Referee, Herb Dean calls for Gonzaga to respond but nothing is forthcoming and after several more strikes, he steps in at 1.37 of round 3 to call the fight by TKO.

Couture successfully defended his Heavyweight Championship and also won the Fight of the Night into the bargain.

This fight was for the UFC Interim Light Heavyweight Championship.

In his light heavyweight debut, Couture was attempting to become the first fighter to win belts in two divisions, however he was going up against a fan favourite knockout artist in Chuck Liddell.

In round 1, as Liddell goes for a kick, Couture hits a blast double and takes the fight to the ground. Liddell frames to create space and stands back up. Liddell lands good right hands as Couture works back to the clinch.

Couture keeps pressing forward and starts to connect with a left-hook, overhand-right combo. With a minute remaining, he gets another blast double and puts Liddell on his back. Couture keeps body-lock control while Liddell stands again.

In round 2, Couture resumes the aggression opening with a right hand. They trade left hooks but Couture’s strikes are consistently backing his adversary up. Diving on a single leg, Couture elevates the leg and trips the other foot at 1:20.

Working on top, he now has more success in holding Liddell down. Then getting to his knees, Liddell reverses the position and puts Couture down as the round ends.

In round 3, Couture snaps Liddell’s head back with a perfect uppercut. As Liddell circles away he is followed with a crisp right hand that visibly hurts.

Following an overhand right, Couture lifts Liddell and dumps him down on the mat. He then moves straight into mount with a relentless barrage of punches. Liddell, with his hands up, is unable to escape the mount.

Referee, John McCarthy intervenes at 2:39 of round 3 to call the match by TKO. Randy Couture wins the interim UFC Light Heavyweight Championship and is also victorious in becoming the first UFC fighter to win belts in multiple divisions.

So there we have it folks, 5 of Randy Couture’s best MMA finishes!

With memorable performances and a record of 19 wins with 7 TKO/KO’s and 4 submissions, where would you say Randy Couture ranks among the all-time, pound for pound greats? From the list above, what’s your favourite fight moment from “The Natural”?

BRING OUT YOUR NEW “NATURAL” DEFAULT in the KINGDOM of FU: check out our interview with Randy Couture, as well as our Top 5 MMA series, including Khabib Nurmagomedov’s Top 5 pre-UFC Finishes, The NEW Lightweight King, The Rise of Chinese MMA Fighters, check out what’s on the mind of Jorge Masvidal, and Leon Edwards, as well as our exclusive ONE Championship interviews with Brandon Vera, Eduard Folayang, Thanh Le, and Martin Nguyen.

LET YOUR BEST NATURE BE YOUR NEW NORM in KFK wear, and subscribe for more NATURAL-BORN FU on YouTube!

Prisoners of the Ghostland (2021) Action Special

Roland has been a sports enthusiast from the age of 8, engaging in running, swimming, climbing, surfing and kayaking. He began training Brazilian Jiu Jitsu in 2018 having become a staunch fan of pro MMA. He has since competed in several BJJ tournaments and is continuing to expand his martial arts knowledge and skills.