The worldwide popularity of MMA has witnessed the rise of the some of the greatest professional fighters in history, and Randy “The Natural” Couture unequivocally belongs on that list. Having already established a name for himself in wrestling, Randy entered the UFC during its relative infancy and swiftly became a name to be reckoned with as the sport entered the mainstream in the early 21st century.

His wins were even more notable due to the uncommonly mature age (by professional fighter standards) he was competing at, before retiring in 2011. Randy has also parlayed his MMA career into the world of action movies, especially with his role in “The Expendables” franchise.

Randy sat down with KFK recently to share a behind-the-scenes look at his latest movie, “Final Kill”, along with a look back on his competitive days, his thoughts on the evolution of MMA since his retirement, his fave MMA stars, martial arts films along with a brief peek at his other project in the works, “Dark Angel”!

Hello Randy, we hope you’re keeping well. Welcome to Kung Fu Kingdom and thanks so much for taking some time out to speak with us.

Hi Brad, I’m doing very well. Thanks for having me on Kung Fu Kingdom today!

Awesome. To get your views briefly what do you think of the name Kung Fu Kingdom, or KFK?

It’s a cool name, what’s not to like? (Both laugh)

Thanks! Well, let’s dive headfirst into “Final Kill”. What interesting stories can you share about making the movie?

Well, it’s always a great opportunity to be involved in a film with people who have been very successful in the industry like Billy Zane and Danny Trejo. Although, as it worked out, I didn’t end up having any scenes with either of them. (Both laugh) I liked the role quite a bit, as the character is quite a no-nonsense kind of guy.

Definitely. On that note, how does making something like “Final Kill” compare with other movies you’ve done like “The Expendables” series? Did you ever imagine yourself working with the likes of Sylvester Stallone, Arnold Schwarzenegger, and Bruce Willis?

No, absolutely not! Being in just one movie with all of those guys was so surreal, and not just for me but for all of us. That was such a great experience, and one to really grow on. As far as how it compares to “Final Kill”, Deacon Long is definitely a completely different kind of role from Toll Road. He’s not a mercenary kind of guy, he’s more an interrogator or someone who smacks a guy around to get the right answers. That’s the nice thing about acting – you get to do some things you’d never do in real life!

Indeed, agreed! So, what was your most memorable moment in making “Final Kill”?

There was one scene in particular that was kind of a gruesome, just with how it was lit and shot. I don’t want to give too much away, but like I said, my character isn’t a terribly nice guy, but he’s an effective guy, so that made it a fun scene to shoot.

No doubt. Speaking of which, what’s your experience been like in transitioning from MMA to movies?

Well, there’s commonality when it comes to being diligent and being prepared, and it’s the kind of thing where my athletic and military background kicks in. I usually try to be the first one on set and be ready to go at the start of the day.

Randy joined an action movie ensemble in 2010s The Expendables

A solid work ethic most definitely goes far. So, how would you compare training for MMA to training for action movies?

I think the mentality is ultimately the same, in terms of staying at the top of your craft. I’ve had a great learning experience with a lot of the veterans of the industry that I’ve gotten the chance to work with, and I feel like I learn something new every time I put myself out there.

Now, if we can gather a Randy Couture fight gem or two; what would you say are some of the most important elements in training for an MMA fight?

I think having a team that’s going to be rational and honest with your strengths and weaknesses as well as your opponent’s is always important. Beyond that, it’s really just about being willing to do the work and sharpening the tools you need for a fight.

Sometimes, you could be taking a wild guess on what that is, but most of the time, you’ll get it right if you know what you’re going up against. That’s what fighting is all about, its kinetic chess, in many ways, predicting what your opponent is going to bring and having answers for those moves.

Kinetic fu! What are your thoughts on the evolution of MMA since you retired in 2011?

Absolutely, it’s bigger than ever now. Who would you say are some of your personal favourite MMA fighters?

I’ve also been a huge fan of Dan Henderson, from training with him and watching him fight, he’s always fun to watch. I don’t think anybody can talk about the top guys without talking about Georges St-Pierre, he’s an amazing fighter and a great person, in and out of the cage. Nowadays, I do a lot of color commentary for the Professional Fighters League, and there are quite a few guys coming up there that are really promising today, too. 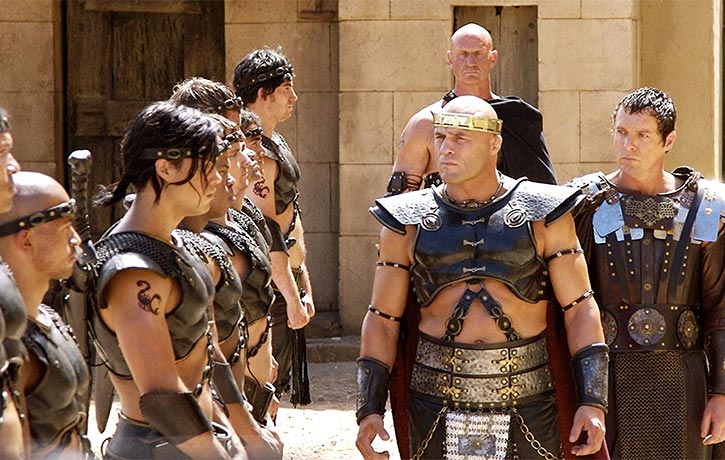 Be sure to check out Randy Couture in Final Kill

Okay, so now that you’ve been involved in quite a few action roles now, what would you consider as among your actual personal favourite martial arts movies?

Well, when you talk about the best martial arts films, I don’t think you cannot talk about the work of Bruce Lee at the top of that list. He really pioneered the whole genre in many ways. I also really like a lot of Steven Seagal‘s early work like “Under Siege“, and he brought a newer element to action movies by introducing Aikido that hadn’t really been seen much before. I loved a lot of Van Damme‘s movies like “Bloodsport” and “Kickboxer“, as well.

Some of the classics there! Looking ahead now, what other projects do you have in the works after “Final Kill”?

Right now, we’re in pre-production for a movie called “Dark Angel”, that’s going to shoot in Las Vegas in May. It’s got a pretty big cast, and I’m also producing along with being in it. The script was written by my girlfriend Mindy, and she’s producing and appearing in it as well, so it’s going to be a fun movie to make.

Randy in the movie Hijacked

Randy returned as Toll Road for The Expendables 2 and 3

Randy is ready to roll in Final Kill

Sounds intriguing – looking forward to seeing that! Well, as we prepare to sign off Randy, our mission at KFK is to help 100 million people get into martial arts for all the positive benefits that it can bring to individuals, the nation, and the world – what do you think about this goal?

I think that’s a tremendous goal and an amazing endeavor. Martial arts is such a great tool to build character and confidence. My daughter used to deal with issues around self-confidence, but she started Jiu-Jitsu and kickboxing, and that really brought her out of her shell and she really found her way through martial arts.

I think also with social media these days, it’s harder for kids to handle things like bullying, and you need to teach your kids to be able to stand up for themselves, and martial arts is a great tool to instill that kind of confidence and assertiveness in them.

Wise warrior wisdom there. Thank you so much for your time today, Randy! It’s been a true pleasure to speak with one of the legends of MMA. We hope “Final Kill” goes well for you and we look forward to “Dark Angel”, and all the other action projects you have coming up!

Thank you Brad, it’s been a pleasure to speak to with you guys at Kung Fu Kingdom!

“Final Kill” is currently available through Video on Demand platforms. What are your impressions of “Final Kill” or perhaps you’ve seen it already? Are you looking forward to seeing Randy Couture in “Dark Angel”? Who is your favourite MMA fighter to make action movie leap? Let us know in the comments below; Like, share and join in the conversation with us on Facebook and follow us on Twitter & Instagram.

MMA FANS! From the Octagon to Expendables to the Kung Fu Kingdom: keep an eye out as UFC Hall of Famer, Randy ‘The Natural’ Couture may soon be joining the KFK Hall of Fame… Meantime check out the ever-growing FU-niverse of movie reviews, exclusive interviews, get KFK’d Officially in your own gear, and subscribe for all kinds of mixed-up martial arts on YouTube