Prisoners of the Ghostland (2021) Action Special

If Nicolas Cage proclaims his latest vehicle as “the wildest movie I’ve ever done”, that’s not an endorsement to be taken lightly. Nor, for that matter, is said wild ride, Sion Sono’s “Prisoners of the Ghostland”.

With Nic Cage leaning into Nic Cage mode as only he can, the samurai western set in the future surrounds him with plenty of over-the-top action, campy performances, Tak Sakaguchi wielding a katana, and quite literally…explosive stakes!

After a corner of Japan is shut off from the rest of the world due to a devastating nuclear accident, the Samurai Town is now ruled over by the tyrannical Governor (Bill Moseley) as a pristine time capsule to feudal Japan and the American Wild West.

When The Governor’s “granddaughter” Bernice (Sofia Boutella) runs away, The Governor coerces an imprisoned bank robber known only as ‘Hero’ (Nicolas Cage) to retrieve her.

Hero and Yasujiro prepare to face off

Hero is forced to play a deadly game

Bernice has fled to the desolate wasteland known as the Ghostland, populated by survivors of the nuclear spill, but the stakes are doubly high for Hero. The Governor also outfits him with a suit affixed with explosives on his arms, legs, neck, and groin, with disobedience and failure to retrieve Bernice within five days, to result in unpleasant consequences for Hero.

Hero has a smoking dark past

That’s not to say Cage fans won’t get their money’s worth from his penchant for chewing scenery, particularly in Hero’s angered response to one of the bombs on his suit going off that’s sure to become one of Cage’s most quoted lines ever.

However, Sion Sono’s direction emphasizes the craziness of “Prisoners of the Ghostland” at every turn, from the frozen in time, East-meets-West blend of Samurai Town to the post-apocalyptic world of the Ghostland and its inhabitants.

Bill Moseley also rises to the occasion of Cage-style campiness in his ceaselessly entertaining performance as The Governor, while the movie’s sets and cinematography feel like a manga brought to vibrant life. Seeing “Prisoners of the Ghostland” is like stepping into not one, but two other worlds with the contrast of Samurai Town and the Ghostland in a fever dream of madness.

The Governor has arrived

For martial arts lovers and Japanese action fans, the name Tak Sakaguchi is the man of the hour in “Prisoners of the Ghostland”.

The Governor rules without mercy

The Governor and his entourage enforce their reign

Hero arrives in the Ghostland

He’s gained more notoriety in the west with his more recent action films like “Re:Born” and “Crazy Samurai Musashi”, and he embodies the way of Bushido as The Governor’s perpetually silent, right-hand samurai, Yasujiro.

“Prisoners of the Ghostland” could almost be taken as the sequel to “Versus” that never was, but Tak’s cool, Zen-focused Yasujiro counterbalances the insanity of the movie as a man of no words, his katana never more than a split second away from being unsheathed.

The Ghostland is a surreal place

While “Prisoners of the Ghostland” has its share of gripping action scenes, Tak thoroughly steals this side of the movie, his first fight sequence cleverly held in check until just the right moment, at which point he slashes through a dozen opponents like Wolverine.

Yasujiro is also grappling with some internal conflict that’s at odds with his samurai fealty to who is essentially his daimyo in The Governor, but when he and Hero finally go at it, let’s just say Yasujiro’s fine-tuned swordsmanship is the yin to a much more improvised yang on Hero’s part.

Hero finds himself in a tough situation

Hero works out his escape strategy

“Prisoners of the Ghostland” tosses viewers into the deep end of a jungle of genre-meshing, a manga-inspired visual palette, hack-and-slash action scenes, and performances that couldn’t be more gleeful in the camp they embrace, including the always switched-on for maximum GIF-ability Nic Cage.

Sion Sono makes his English-language directing debut with all his cards on the table, while the great Tak Sakaguchi draws his sword at all the right moments to be the movie’s breakout character. Nic Cage fans take note – henceforth, No Cage-athon is complete without “Prisoners of the Ghostland”! 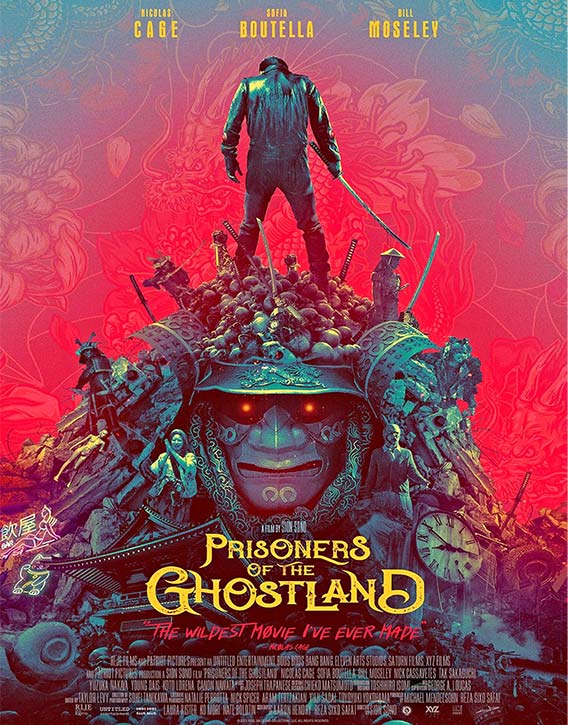 Prisoners of the Ghostland now in theaters and on VOD!

BE A HERO, USE YOUR SWORD TO BREAK FREE FROM BEING A PRISONER OR A GHOST and Enter the FU-niverse instead with these Top 10’s, Top 5’s, deep-dive interviews, brave those ghouls in KFK wear, and subscribe for more adventure-FU on YouTube!