Home » Articles » MMA: Who Will Be Crowned The NEW Lightweight King of 2021?

MMA: Who Will Be Crowned The NEW Lightweight King of 2021?

In the aftermath of the events that took place at UFC 257 on January 24th, the landscape of the UFC’s stacked lightweight division has changed dramatically.

Gone are the days of McGregor, Ferguson and Nurmagomedov ruling as the only ‘three kings of 155’, as it’s widely apparent that 2021 has dawned a whole new era in the battle for championship gold. We’re once again keen to know who the definitive best lightweight in the world is, and we can assume there’s a vacant belt waiting to be wrapped around the waist of whoever that is.

This year is already really shaping up to be a bundle of excitement. We’ve seen thunderous debuts, losses avenged, and legends slain, so let’s preview how this unofficial title tournament may play out, and who the most prominent contenders are at this point in MMA: Who Will Be Crowned The NEW Lightweight King of 2021?

What Happens to the UFC’s Biggest Star Now?

If there’s one thing we know about ‘The Notorious One’, it’s that he’s as much a champion in defeat as he is in victory. He knows how to bounce back from a loss, and there’s little doubt about Conor McGregor tasting victory again.

However, for now, we’ve got to take him out of the title picture. He’s lost his past two lightweight bouts, and even from a money-making standpoint, it’s hard to find justification in him fighting for a title next.

The Irishman has said that he has every intention to stay as active as possible, and there are a heap of mouth-watering possibilities we’d love to see happen…in the cage that is, not the boxing ring!

Fights we’d Love to See for McGregor this Year:

The biggest rubber match of all time that everyone has been waiting years for. Both are even bigger stars, and this makes sense now, perhaps more than ever!

Two eras, two weight classes, and a knockout a piece. This MUST happen, although with Poirier likely to be in title contention, he may be faced with a choice between going for gold, or going for the multi-million jackpot of a pay cheque he would get in the McGregor trilogy.

A dream fight we’ve wanted for a while. It’s a great shame we never got Ferguson vs. Khabib, but with both fighters coming off losses, this could make a lot of sense for 2021.

Justin Gaethje is undoubtedly still one of the best, and perhaps the most exciting lightweight in the sport.

With Khabib out the picture, he can shake off his last loss and focus on the new breed of elite contenders. After all, this is the man who snapped Tony Ferguson’s monster of a streak, and is confident he can knock out anyone in his quest to get back to a title shot.

Should he fight for the inaugural belt? It’s tough to say when he’s coming off a loss. Though you could certainly throw that into the equation if he gets his rematch with Dustin Poirier, which could be likely considering their first meeting was an absolute classic of a scrap.

Fights we’d Love to See for Gaethje this Year:

With titles, or even the outcome aside, one simply can’t forget the barnburner of a spectacle that their first collision was. With both men improved since then, we might be looking at a potential Fight of the Year!

Two warriors who take incredible pride in their endurance, grind and overall toughness, this would be a hella fun. Both are coming off losses, so why not now eh?

Or we could go with the man who beat ‘The Hangman’ in one of the most impressive promotional debuts ever. They’re both proven as championship-calibre fighters and it could fit in very well as a title eliminator at some point this year. The best of Bellator, versus the best of WSOF (World Series of Fighting). Who’ll take it?

After a spotty career at featherweight, ‘Do Bronx’ has certainly found his groove upon his return to 155lb (70kg), and it’s possible that he’s never looked better as he reaches his prime.

He’s coming off of two giant victories last year against Kevin Lee and Tony Ferguson respectively, and is definitely in the running for title contention, except there’s a pretty hefty queue at the moment.

He’s had Nate Diaz calling him out, but is only interested in fighting for the belt next. If he doesn’t get the fight, he’ll surely be eyeing a top contender.

Fights we’d Love to See for Oliveira this Year:

With a combined 52 fights in the UFC, there is a wealth of experience going on here. Both are wizards of jiu-jitsu, and are equipped with a ton of recourses. There’s no denying ‘Stocktown’s’ own will have a size advantage over the former featherweight though.

After a decent run at welterweight, the former 155lb champion has returned to his UFC roots with a split decision win against Paul Felder. It may not be what Oliveira wants right now, but a main event between these two in Brazil would be something simply unmissable later on in the year.

They’re the only two men ranked above the Brazilian currently if we’re not counting Khabib Nurmagomedov, and by the sounds of it, that’s all he’ll take right now. Who can blame him?

Will ‘The Eagle’ Take Flight Again? 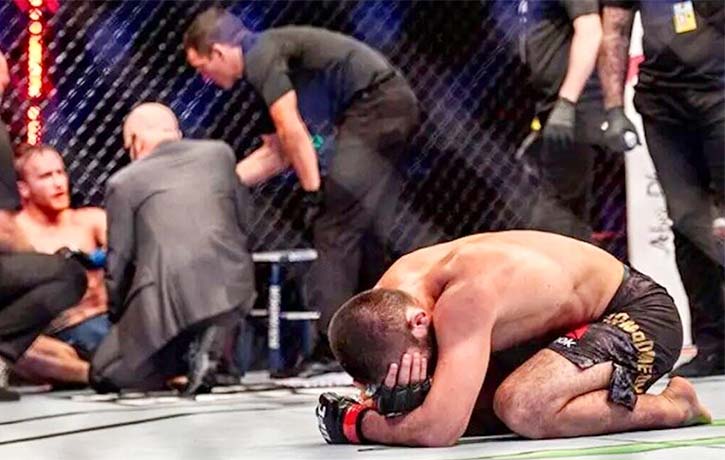 So very quickly here, we’ve got to acknowledge the fact that Khabib still holds the belt officially on paper, yet it’s been four months since he announced his retirement.

Realistically, we still have to assume that’s it for him. What’s interesting here is that sooner or later, this has to be made official. There’s a traffic jam queuing up for that belt and the division has to move on.

One could potentially imagine a Georges St-Pierre superfight match at some point in the future, but it’s hard to see that any time soon, especially when considering how long it took for GSP to complete his brief transition to middleweight in 2017.

He may only have one UFC win under his belt, but “Iron” Michael Chandler has earned his spot on top of the lightweight mountain through a wealth of triumph in Bellator.

Khabib supposedly wants to be impressed in order for him to at least tease a return to the cage, and if there are any impressions being given off any time soon, they perhaps might be made by Chandler.

He’s a front runner in this unofficial title tournament formulated at UFC 257, and we’d assume he’s either one or two fights away from tasting that glory. Question is: Who will it be against?

Fights we’d Love to See for Chandler this Year:

See above, as we’ve covered this already!

Now we’ll admit this is of course unlikely, but former UFC and Bellator lightweight, Will Brooks, has proven himself a definitive chink in the armour of Chandler. He’s beaten him twice before, and is confident in scoring a hat-trick, but they’re at polar opposite positions in their respective careers right now, so it would be interesting to see how a third bout would go.

The winner of UFC 257’s co-main vs the winner of the biggest main event in a long time…For the belt maybe?

Diamonds are Forever for Dustin Poirier

Dustin’s come up a lot in this article, and for good reason. You’ve got to say he’s the number one sought-after 155-er right now, with his recent victory over the biggest MMA star of all time.

The reality could be that Dustin Poirier has only two choices: Take the McGregor rematch, or take whatever the title fight is. Seeing how Khabib stopped both McGregor and Poirier before retiring, it’s unlikely we’re getting both together.

There’s no doubt McGregor will be chasing the rematch, which will surely be enough for Dana White to draw up the big event. While once upon a time in the UFC, the title was the most important factor for any fighter, recent times have proved that stars like McGregor, and the increasing prevalence of money fights influence these decisions greatly.

Poirier could take a McGregor trilogy and the title in what would be the biggest year of his career, and with revenge on The Notorious One’s mind, I don’t think we’ll be waiting till next year. Either way, we think we speak for everyone when we say we’d much rather see that fight happen in front of a sold-out crowd of thousands!

…And there’s plenty more where that came from! With up-and-comers like Islam Makhachev likely to make serious dents in the rankings, the 155lb division’s turnout is as unpredictable as ever.

FIND MORE DREAM MATCHUPS in the KINGDOM of FU: with our Top 5 MMA series, MMA specials; Khabib Nurmagomedov: Inside the Mind of the Russian Eagle, Leon Edwards: Inside The Mind of Birmingham’s Own ‘Rocky’, and Jorge Masvidal: Inside the Mind of a Real-Life Street Fighter!

CHANNEL YOUR KINGLY LIFE FORCE in KFK gear, and subscribe for more KINGS OF FU on YouTube!

From an early age, Ollie developed a deep love for Asian action cinema and subsequently the more traditional martial arts. He trained and competed in judo up to his university years and now enjoys nothing more than covering combat sports as a journalist!