This home video package, part of the Eureka Classics range, has a first print run of 2000 copies, and will feature a Limited-Edition O-card Slipcase, Collector’s Booklet and Reversible Poster

ONE ARMED BOXER RELEASES TODAY and is  AVAILABLE TO ORDER via Eureka Entertainment and Amazon! Why not ENTER OUR FREE COMPETITION GIVEAWAY and WIN YOUR OWN COPY?

Written and directed by Jimmy Wang Yu, he stars as “Yu Tien Lung”. Wang Yu was the first superstar of Chinese cinema, with hits such as “One Armed Swordsman”, “The Chinese Boxer” and “Master of the Flying Guillotine”. In later years he appeared in Sammo Hung’s “Millionaires Express” and Donnie Yen’s “Dragon/Wu Xia”.

Actress Cindy Tang Hsin appears as “Hsiao Yu”, who helps Tien Lung recover. She featured in several Taiwanese martial arts movies in a short career, sadly passing away in 1978 aged just 27. Tien Yeh stars as “Master Chao Liu” the ruthless boss of the Hook Gang. He appeared in over one hundred Taiwanese movies.

Yu Tien Lung is one of the top martial arts students of the Zhengde School.

After incurring the wrath of the Hook Gang, a dangerous group of opium dealing thugs, Yu Tien is attacked by a team of deadly mercenaries, and has his right arm violently severed.

Yu Tien survives training his remaining arm to be stronger than ever. With his recovery complete and a new set of martial arts skills, he goes on a rip-roaring rampage of revenge!

Director Jimmy Wang Yu opens the film with a classic fight in a teahouse that most films of the era would be happy with for their finale.

It sets up an ever-escalating conflict between the Zhengde martial arts school and the Hook Gang. The opium-dealing Master Chao feeling wronged, storms into the Zhengde school demanding Tien Lung is handed over to him for retribution.

Wang Yu expresses himself as a raw fighter 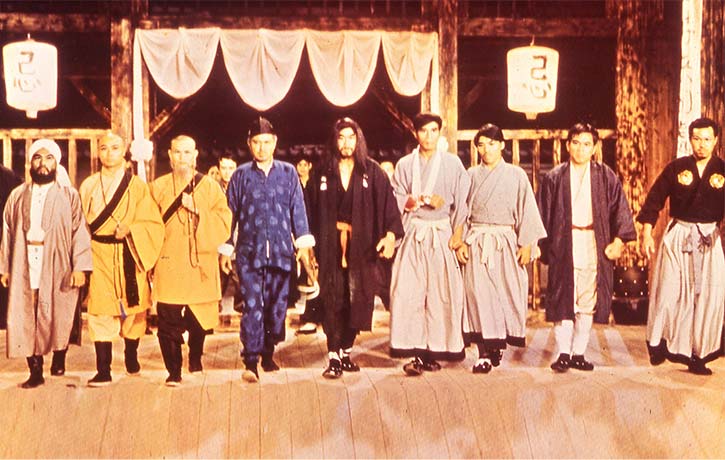 A one-on-one fight ensues incorporating traditional long fist techniques and a few Peking Opera style flurries. It soon descends into a mass brawl between the students of the school and Chao’s thugs.

Humiliated, Master Chao imports several deadly, international fighters to exact revenge on Master Han and his students. They attack the brick forging business of the Zhengde school, resulting in Tien Lung chasing down the culprits for an extended battle in a grain mill.

Jimmy Wang Yu Fights Energetically from One Opponent to the Next

Although the choreography is less sophisticated than a Chang Cheh or Lau Kar Leung movie, Wang Yu fights energetically, leaping from one opponent to the next.

Master Chao confronts the Zhengde school once more, this time joined by his team of international allies. It’s a great sequence of one-on-one duels displaying the individual styles of fighting.

They range from some authentic looking Judo throws and Muay Thai, to a bizarre fight with a grey-faced “Indian” yoga master. The movie title is a little bit of a spoiler, but when the inevitable loss of an arm happens it is hilarious. It’s probably for the best considering how horrifically it could have been presented. Tien Lung sets about conditioning his remaining arm to become an invincible weapon.

For the finale, Tien Lung uses his new-found strength and skills to take on each of Master Chao’s mercenaries. As before, we see some entertaining varieties in style and a bizarre handstand battle with the Yoga master!

There is a sequence set on a rickety footbridge that made me wonder if this is where director Steven Spielberg got the idea for the climax to “Indiana Jones and the Temple of Doom”.

Although he is a legendary name in the history of martial arts cinema, Jimmy Wang Yu was not actually trained in martial arts. Off screen, he did have a notorious reputation for getting into fights. 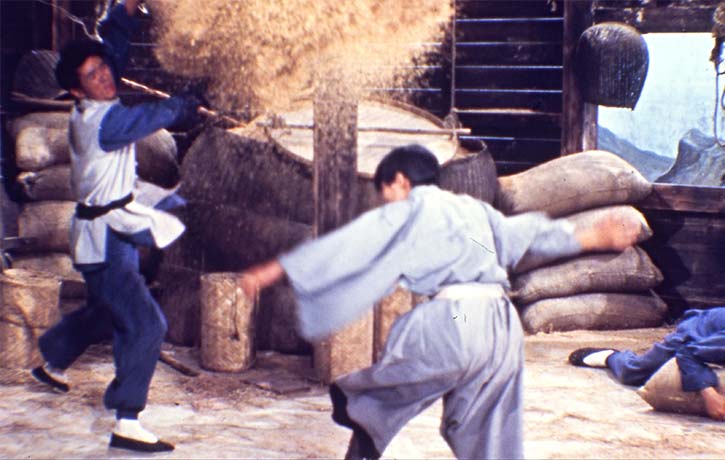 An extended battle in a grain mill

Onscreen there is no denying his James Dean-like energy and charisma. For the fight scenes, Wang Yu might not have the silky skills, acrobatics or flexibility of the performers around him, but the aggressive, raw way he expresses himself during the action convinces you that he is a genuine fighter.

It’s easy to see why Jimmy Wang Yu was Hong Kong cinema’s biggest star prior to Bruce Lee, and this film is a great illustration of that.

There are some unintentionally funny moments, such as the infamous removal of our hero’s arm, or the politically-incorrect Yoga master, but overall, this is a very well-directed movie.

The use of the film scores from “Shaft” and “Diamonds are Forever” is often perfect, but occasionally totally inappropriate to the scene, also raising a little smile. It is part of the charm of these older films.

His arms off Tis but a scratch

The Blu-ray restoration is stunning. The picture looks bright with bold colours and sharp focus. The Eureka edition includes a booklet that features lots of stills from the film and a couple of informative essays about its production and influence on the genre.

For fans of old-school kung-fu fighting, you certainly get plenty of bang for your buck. This film is absolutely packed to the brim with fight scenes, with barely a pause for breath between them.

They are very well filmed too, often looking more up-to-date than many of the popular Chinese films that came after it. This film and its predecessor, “The Chinese Boxer”, are often cited as ground-zero for the kung-fu movie craze that kicked off in 1970 before going stratospheric with the emergence of Bruce Lee.

“One Armed Boxer” is not just a piece of genre history, it was way ahead of its time in terms of broad appeal and entertainment value. This is another excellent presentation of an old-school classic for collectors to soak up.

“ONE ARMED BOXER” RELEASES TODAY, 24th May, and is AVAILABLE TO ORDER via Eureka Entertainment and Amazon! Don’t forget to ENTER our FREE COMPETITION to WIN your own copy 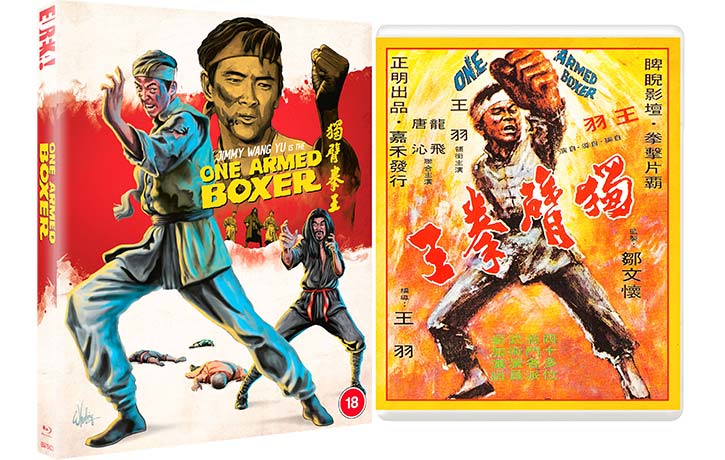 Does this rank among your favourite, old-school, kung-fu classics? Is this Jimmy Wang Yu’s best movie? Which other titles would you like to see receive the same Blu-ray, TLC treatment? Let us know in the comments below, join in the conversation, share this on Facebook, and follow us on Twitter & Instagram.