Gangster flicks and martial arts are like two peas in a pod, and operating at the upper tier of both is Wong Ching-po’s “Once Upon A Time in Shanghai”. A remake of the 1972 Shaw Brothers’ film “The Boxer from Shantung”, the film plays in the same sandbox as its predecessor in positioning itself as a Chinese “Scarface”, while remolding its protagonist into much more of a straight arrow.

Under the action direction of the consummate action legend Yuen Woo-ping, “Once Upon a Time in Shanghai” also hits its viewer right between the eyes with superb fight sequences and absolutely fantastic performances by its two leading men!

Philip Ng tackles the role of Ma Yongzhen, a laborer searching for greener pastures in Shanghai, and possibly finding them when he runs into local gangster Long Qi, played by Andy On.

Sammo Hung also appears in the role of Master Tie, who becomes a close ally and mentor of Ma’s in Shanghai, while Lu Yong plays local police Inspector Wong, and Mao Xiangjun steps into the role of Niu Sanguang, an old acquaintance of Ma’s from his hometown who shows him the ropes in his new home.

Shanghai in the 1930’s is the land of opportunity for anyone in China eager to make a fortune, something that Ma Yongzhen insists upon achieving honestly.

Ma Yongzhen is ready to fight

Arriving in Shanghai, Ma begins working as a laborer at the Shanghai pier, and as he climbs higher up the city’s economic ladder, he remains cognizant of pulling the new friends he’s made and Shanghai locals who have taken him in, up with him.

Ma soon finds a new ally in the form of Long Qi, a local nightclub owner who also happens to be one of the leaders of Shanghai’s notorious Axe gang, and despite Ma keeping out of Long Qi’s criminal activities, the two become good friends.

However, with a hit being put out on Long Qi’s head by rival gangsters and an undercover Japanese spy, Ma soon finds himself pulled into the escalating gang war on the streets of Shanghai.

With its period setting, gangster theme, and desaturated color scheme that renders it nearly a black-and-white movie, “Once Upon a Time in Shanghai” is an unabashed love letter to all things Shaw Brothers (the same can certainly be said for the first proof-of-concept trailer, which is easily among the best trailers I’ve ever seen for a martial arts film). What’s a little more surprising is how much of a clear Bruce Lee influence there is on the film.

Ma Yongzhen will let nothing stand in his way 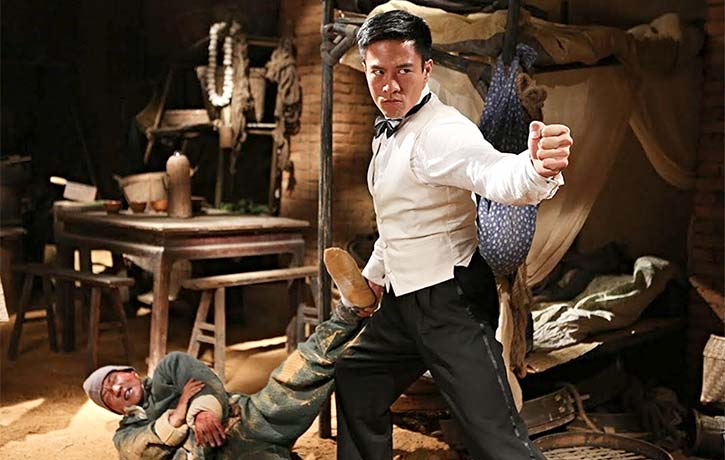 Here we have Phillip’s country bumpkin hero finding himself a stranger in a land of opportunity, admonished by his mother to never strike an opponent with his exceptionally powerful right fist, and bearing a jade bracelet as a reminder of his promise to her.

Even Phillip’s look in the film evokes a clear Bruce Lee analogue, right down to his wardrobe, alternately patterned on Bruce’s ensemble in “The Big Boss” and “Way of the Dragon“, with his bowl haircut.

The fact that Phillip would later go on to portray Bruce himself in 2017’s “Birth of the Dragon” is not only ironic, but almost renders “Once Upon a Time in Shanghai” as something of a screen test for that very role, and one that Phillip passes with flying colors.

Of course, the idea of channeling Bruce Lee in a remake of a Shaw Brothers film sets the viewer up to expect loads of stunning martial arts action, and under the action direction of the legendary Yuen Woo-ping, “Once Upon a Time in Shanghai” does not disappoint.

We’re barely two minutes into the film before Ma’s (left) fist collides with a brusque enemy’s cheek in gorgeous slow-motion, followed by a superb inaugural fight sequence that sets the action-packed tone of the film. Here, Ma stands up to an injustice on his fellow migrants to Shanghai, and standing up for a righteous cause proves to be the most natural thing in the world for him throughout the film.

That’s much less of a priority for the cocky, irreverent Long Qi, colorfully played by Andy On with a Nicolas Cage-esque flamboyance in contrast to the more unassuming Ma.

Long Qi and Ma’s first meeting proves to be one of the film’s action highlights, with Ma being challenged to hold his own against Long Qi until a discarded cigarette burns out, and earning his respect for both his fighting skill and unflinching morals.

The film is a tad light on action in the middle section, with Sammo Hung, relegated to a handful of back fist strikes against the invading Axe gang, being the most glaring shortcoming in the film. Still, viewers get their money’s worth and then some when the third act kicks in, with Ma doing practically nothing but mopping the floor with horde after horde of axe, knife, sword, and shuriken-wielding gangsters.

The finale also has a magnificent emotional pay off, with Ma no longer hindered by the desire to hold off on right-handed fist strikes.

This gives way to the film’s two most rewind-worthy money shots, Ma effectively turns one adversary’s shoulder to crushed gravel, and another that will go unspoiled here – other than to say it highlights not only the emotional power Ma is finally unleashing, but also beautifully symbolizes his reneged vow to keep his right fist by his side. Not to mention being the highlight moment of the film’s excellent action orchestration – this is a kung fuuu-“ooooh!” moment if ever there was one!

As a dual homage to Shaw Brothers and Bruce Lee movies, “Once Upon a Time in Shanghai” is an absolute blast. Although Sammo Hung is kept on the sideline far too much in our view, the film nevertheless does anything but short change its audience’s desire for 95-minutes of stunning butt-kicking.

Philip Ng and Andy On also have fantastic chemistry, with the latter giving a marvelously colorful anti-hero performance, while the film weaves emotional power and symbolism in at all the right moments. Whether it’s a Shaw Brothers throwback or a Bruce Lee tribute you crave, “Once Upon a Time in Shanghai” makes for a rocking-good-time in Shanghai, that’s for sure!

Ma Yongzhen has arrives to settle the score

Ma Yongzhen leaps into action with a tornado kick!

Ma Yongzhen puts his enemy down

What did you think about “Once Upon a Time in Shanghai” from 5 years ago, and the original “Boxer from Shantung”? You can order your Blu-ray copy via Amazon!