Superhero movies are everywhere these days, and while most try to ground themselves within the notion of what a world of superhumans would be like, once in a while, one comes along to ask the opposite question – what would it be like if someone in the real world decided one day to put on a mask and take a shot at being a superhero? 2007’s “Mirageman” exists right alongside “Kick-Ass” and “Mystery Men” in that spectrum of superhero deconstruction, thrilling viewers with spectacular fight sequences while earning our deepest investment for the quest of its everyman protagonist. With a soft-spoken yet blazing action performance by Marko Zaror, “Mirageman” earns its place in the modern day superhero canon – a gripping tale of a hero whose greatest strength may be his fighting skills, but his greatest power, his own heart.

Marko Zaror (the ‘Latin Dragon’) steps into the role of our hero, Maco Gutiérrez, aka the mysterious urban crime fighter, “Mirageman”, while Maria Elena Swett portrays Carol Valdivieso, a journalist determined to find out who’s behind the mask. Ariel Mateluna assumes the role of Maco’s mentally handicapped brother, Tito, while Mauricio Pesutic assumes the role of local police detective Juan Moli, who becomes a close ally of Maco’s as he embarks on his superheroic mission.

It was supposed to be just another night in the life of Chilean bouncer Maco Gutiérrez, but when he stumbles into a break-in befalling local television anchorwoman Carol Valdivieso, he throws on one of the thugs’ discarded ski-masks and pummels her would-be attackers before running off into the night. Despite his efforts to avoid the spotlight, Maco soon see his masked face all over the news after Carol reports on the mysterious stranger who came to her aid. 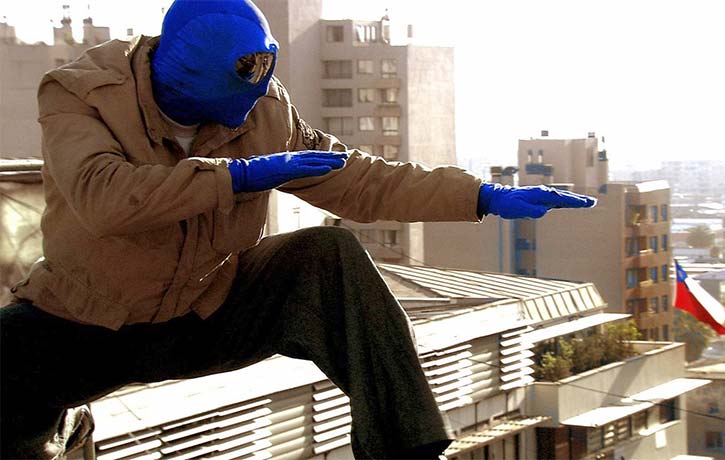 Mirageman is out for justice! 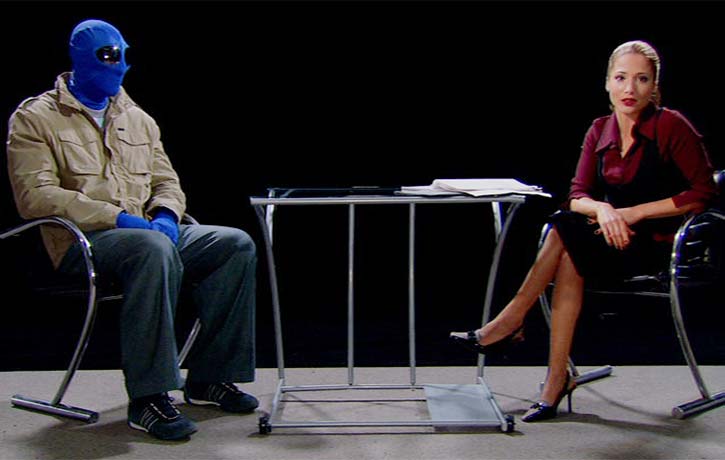 Mirageman is interviewed on the local news

What’s more, Maco’s institutionalized brother, Tito, has his spirit lifted considerably by the reports of the masked hero who came and went “like a mirage”. Seeing how much he’s inspired countless strangers and given a boost to his brother’s own mental health, Maco puts a costume together, and continues to fight crime throughout the city as the anonymous urban hero known as “Mirageman”.

For being a wholly original, one-off superhero film, “Mirageman” is a surprisingly deep deconstruction of the very concept of masked crime fighters and comic book adventures.

Our hero, Maco, is a genuinely decent, kind-hearted man with a purity and selflessness that Superman himself would tip his hat to (interestingly, Marko would later do a complete 180° flip on that character archetype with 2015’s “Redeemer“, a film that draws noticeable influences from “The Punisher”).

Carol about to unmask Mirageman…

However, his steadfast idealism brings him face-to-face with the less than glamorous reality of what the life of a superhero in the real world entails. Just getting suited up for the job at a moment’s notice proves challenging enough, while the fickle nature of finding crimes in progress leads him to set up an email account for concerned citizens to message him when his aid is needed. He also finds himself the subject of mockery in public and even more so in the media, though he’s not without his fans, either, some of whom go as far as to volunteer to effectively be his ‘Robin’.

Though Maco doesn’t let the public and the media get to him, their scepticism of the masked hero gives way to quite possibly the most heartbreaking plot twist in superhero cinema since the ending of “Unbreakable”. However, this in turn lays the groundwork for a kind of spiritual resurrection for Mirageman that sees the masked vigilante finally recognized for the true hero that he is. To see Maco tested as much as he is throughout the film, the viewer is treated to a crash course on just how physically and emotionally demanding being a superhero in the real world would actually be. It also shows just how much of a hero Maco really is; a man whose greatest strength lies not in his fists of fury (which are formidably mighty to be sure) but in his heart of gold.

Mirageman looks over the city

Violence leaves this kid in tatters

The fight sequences in “Mirageman” are as spellbinding. In point of fact, this film is actually a little ahead of its time when it comes to action, as superhero movies at this point still hadn’t quite mastered the art of non-CGI action in the way that we’ve come to expect them to today. Marko Zaror’s gravity-defying kicks and flips are ideal for superhero action, and “Mirageman” makes sure to put them to thoroughly good use in one superb fight sequence after another.

One of the best moments in “Mirageman” comes in the form of a montage of our hero cleaning up the streets of the city intercut with him striking heroic, comic book-inspired poses atop a rooftop. Even better, it’s accompanied by a pitch-perfect theme song for our hero that recalls the intro of the 1970’s live-action Spider-Man television series.

Mirageman is a formidable fighter !

Mirageman cleans up the street

Arguably the best action sequence in the film sees our hero kick and somersault his way past two-dozen henchmen then rescue the kidnapped Carol, but it also ties directly into the aforementioned plot twist that all but destroys Maco until he’s given a renewed sense of purpose by a local police detective who believes in his potential to be a force for good and recruits him to go on a do-or-die mission. Here too, “Mirageman” has something to teach us about what’s in store in trying to be a superhero, since no amount of fighting skill can completely counter susceptibility to injury and basic mortality. However, like the caped crusaders he’s inspired by, “Mirageman” ends on a note of hope and a promise that, no matter how great the struggle, that good will ultimately always triumph, over evil.

It may be a one-and-done superhero adventure, but “Mirageman” takes you on a wild ride of spectacular action while getting straight to the heart of what superheroes are all about. Marko Zaror wows one and all with a non-stop onslaught of martial arts action while delivering an understated performance of a man just trying to make the world a better place, and the film hits all the emotional buttons with its deconstructionist approach to exposing the choppy waters a real-world superhero would have to navigate. With astonishing action and food for thought in equal measure, “Mirageman” is a lively and exuberant comic book adventure with a relatable hero truly worth looking up to.

Detective Moli believes in what Mirageman is trying to do

Mirageman deals with the odds!

Mirageman takes on the wannabes

Have you seen “Mirageman”, what are your thoughts on the film’s spectacular fights and relatable deconstruction of superheroes – and perhaps more importantly, do you want to be one? What are your favourite Marko Zaror movies and fight scenes? Let us know in the comments below; Like, share and join in the conversation on Facebook and follow us on Twitter and Instagram. Beyond the mirage there’s an oasis of FU, (Top 10’s, exclusives and more) waiting just for you! (Also check out our interview with Marko Zaror himself!)