The summer movie season officially comes to an end with “Mile 22”, a passable action thriller held back from being a truly great one through a combination of underutilized players and intrusively fast editing in its fight sequences. The film is buoyed by strong leading performances from Mark Wahlberg and Iko Uwais, along with a solid twist ending.

The elite CIA covert ops team “Overwatch” is tasked with preventing the shipment of caesium, only for faulty intelligence to allow a shipment of the highly toxic chemical agent to slip through their fingers after an earlier attempt at stopping it.

The unit’s lead agent, James Silva, is determined to remedy the botched operation, and finds himself the opportunity to do so with the arrival of the mysterious Li Noor at the unit’s Southeast Asian headquarters. Noor is in possession of a disc, set to self-destruct in a matter of hours, stolen from his own government. It contains location information of the last caesium shipment, and Noor offers to provide Overwatch the code to unlock the details, on the condition that they help extradite him from the country. With time running out, Silva and his unit, including his associates Douglas, Sam Snow, and Alice Kerr, set about transporting Li Noor to an airport twenty-two miles from their headquarters, while under heavy attack from foreign agents determined to get their hands on the disc.

As mixed a bag as it ultimately is, under Peter Berg’s direction, “Mile 22” is at least never slow. The film kicks off with a suburban sting operation in Overwatch’s first attempt to track down the caesium, but it’s also one of the few areas where Ronda Rousey gets to do much, which is sadly not all that much.

The agents of Overwatch lock and load

For as brief as her role in “Furious 7” was, she at least got in one satisfying smackdown with Michelle Rodriguez, but she ends up being woefully underutilized in “Mile 22”. She gets to blast off with an assault rifle at a few intervals while the film’s use of her Judo expertise never really goes beyond her grabbing a fleeing terrorist by the shirt collar and slamming him into the floor during the opening set piece. Elsewhere, she largely issues some admittedly well-written, expletive-laden put-downs towards both her fellow CIA agents and terrorists she encounters (though given her new career in pro-wrestling, this might technically qualify as putting her talents to good use). To the film’s credit, Sam Snow at least gets a pretty memorable, shall we say, exit from the story, but MMA and pro-wrestling fans alike will doubtlessly feel that she’s by far the most short-changed of the cast.

The film does make good use of its race-against-the-clock scenario with some well-orchestrated chases and gun battles, and Mark Wahlberg makes a convincing tough guy in a role that one might more readily associate with Matt Damon or Dwayne Johnson. The most paradoxical element of the film, however, is the fact that Iko Uwais will likely be most viewers’ favourite character in the role of Li Noor, and the film does offer up well-staged albeit chaotically edited fight sequences.

While no audience member will walk out of the cinema grumbling about Iko getting the short end of the stick as was the case with the otherwise fantastic “Star Wars: The Force Awakens”, the editing on Iko’s fights severely interferes with the ability to enjoy the action.

While it’s not as bad as some of the fast-cutting and shaky cam from the latter day “Bourne movies” (what was done to that knockout punch in the Jason Bourne trailer in the finished film still aches me to my core), it nevertheless renders clearly finely tuned martial arts into a mosaic of split-second slices of action zipping by in the blink of an eye.

The editing backs up just a bit in Li Noor’s battle in a medical clinic with two assassins; enough for the viewer to just barely keep up with an otherwise solid fight sequence. The finale, however, is torn to shreds in the editing room, something that becomes all the more devastating with the involvement of the King of Capoeira himself, Lateef Crowder. A Silat versus Capoeira smackdown with Iko Uwais and Lateef Crowder should have been one for the books, but ends up an incoherent blur. 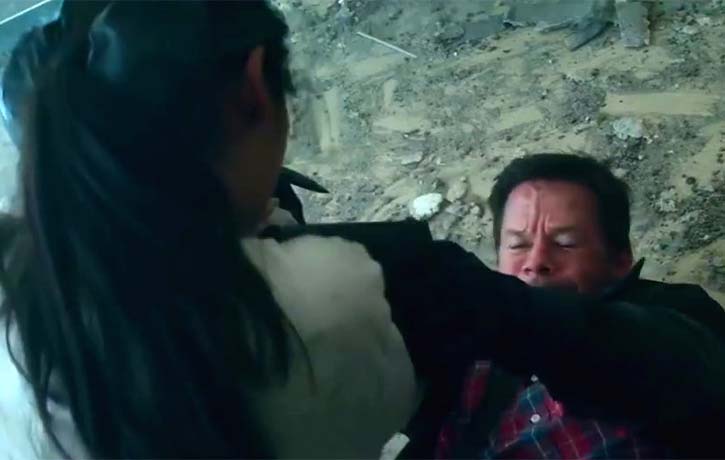 Silva gets more than he bargained for

Li Noor clears his mind after a tense battle

“Mile 22” is a mixed bag of good and bad elements. Peter Berg’s direction keeps the film moving at rapid pace, Mark Wahlberg, Iko Uwais, and Lauren Cohan anchor the film with charismatic performances as varying varieties of bad-asses, and the film’s twist ending comes right out of left field with the groundwork having been well-laid out for it.

However, Ronda Rousey is kept on the sidelines far too much, while Iko Uwais’ fight sequences are watered down by editing that ranges from somewhat annoying to downright terrible. With the kind of talent possessed both in front of and behind the camera, “Mile 22” is a decent watch – it would’ve been awesome to see this land in the great column for its intended audience – but it’s far from an ideal finale to the summer movie season…

Alice Kerr loyal to the Overwatch cause

Bishop orders the agents of Overwatch

Sam Snow has a bad feeling about this

What are your thoughts on “Mile 22”, what other team ups with martial arts experts like Iko Uwais and Ronda Rousey would you love to see? Let us know in the comments below; Like, share and join in the conversation with us on Facebook and follow us on Twitter & Instagram. (Keep up your FU-miles with our other movie reviews too!)