Martial-arts legend Mark Dacascos (“John Wick: Chapter 3 – Parabellum”, “Brotherhood of the Wolf”, “Drive”) gets behind the wheel for a high-octane zombie-horror flick that pulls no punches when it comes to hard-hitting undead action! Dacascos stars alongside his real-life wife Julie Condra (Crying Freeman) and daughter Noelani Dacascos, as the family of the film.

There are notable appearances from action actors Brahim Chab and Kane Kosugi. The movie is written and directed by Wych Kaosayananda (Dead Earth).

Mark Dacascos has a solid fight with Brahim Chab

After a zombie plague decimates human life on Earth, a former hitman (Mark Dacascos) lives quietly with his wife and daughter Bree in a survivalist compound. After their home is attacked, only Bree and her father escape the carnage. As they seek out “The Haven”, a rumoured sanctuary located far north, the take-no-prisoners hitman teaches his daughter how to kill, drive and survive in the violent, zombie-ridden post-apocalyptic wasteland. 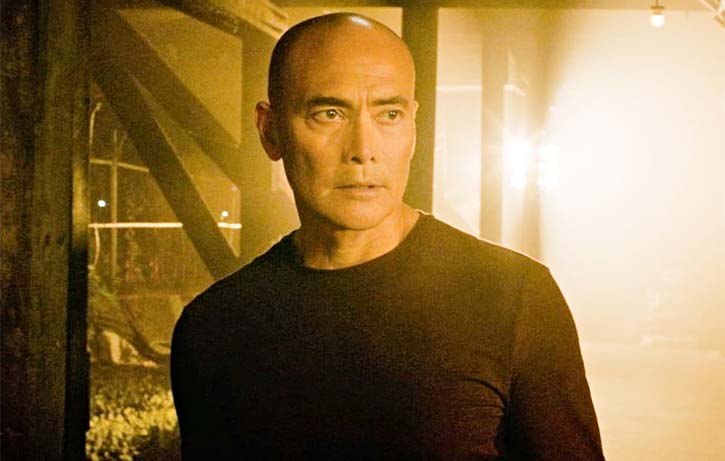 Mark Dacascos is The Driver

The Driver was a former hitman

Mark Dacascos is as Impressive as ever in Terms of Speed & Flexibility (and CAN WE PLEASE HAVE “DRIVE 2”?)

When I hear the words “Mark Dacascos” and “Drive” in the same sentence, my levels of excited anticipation are immediately heightened! Although this movie sadly isn’t the sequel to that 1997 masterpiece (why HASN’T there been a sequel?), the years have not diminished Mark Dacascos’ impressive speed, flexibility and timing when it comes to onscreen action!

When the compound is attacked, it is Mark who is front and centre leading the counter. The zombies are terrifying as their hordes relentlessly overwhelm the previously safe haven, whilst the “living” try to shoot their way out.

There are zombies at every turn of their journey

Dacascos is ultimately drawn into hand-to-hand combat, and does not disappoint. In a fight with Brahim Chab (Boyka: Undisputed 4, Man of Tai Chi), Mark’s kicks and punches are rapid and fluid in equal measure, with some nice grapples, throws and a baseball bat added to an already tasty recipe. It is well-filmed, as the camera follows the fighters, framed wide enough to appreciate the exquisite choreography, without excessive shaking, as has been the blight of many modern action scenes. Check out our exclusive action clip!

“The Driver” realises if his daughter is to have any chance, he must teach her how to survive, drive, and shoot the living dead. With never-ending waves of zombies at every turn of their journey, can they find sanctuary in the mythical “Haven”?

We are used to seeing Mark Dacascos flex his impressive action muscles on-screen, but here he carries the movie on his shoulders with his equally impressive acting muscles! He has a particularly tender and touching scene when he has to deal with the consequences of the opening assault on his wife and daughter, played by his real life wife and daughter.

There are many moments between father and daughter played out with authenticity because of this, perhaps even enhancing the stakes when they are in peril from the terrifying undead!

This is a zombie-horror-action-thriller which is more Jason Bourne of the Dead than Shaun of the Dead!

THE DRIVER out on DVD 19th October via Amazon

“The Driver” releases via LIONSGATE UK on digital download today, 12th October, and you can order the DVD (which is out on 19th October) via Amazon!

BE A DRIVER OF ACTION, STEP ON THE GAS and ENTER THE FUniverse with these movie reviews, interviews, Top 10’s, Top 5’s, ACCELERATE your FU in Official KFK gear and subscribe for a virtual engine of martial-arts action on YouTube!