A martial arts documentary movie featuring footage of Elvis Presley. It was filmed between 1973 and 1974 but finally remastered and released in 2009. The movie was financed by the American singer and actor Elvis Presley, who began to practice karate during his national service in the United States Army.

The main attraction here is one of the 20th Century’s most recognisable icons, Elvis Presley, practicing and demonstrating martial arts. Elvis became fascinated by the martial arts whilst serving in the U.S. Army in the 1960’s. He eventually became a student of Ed Parker’s Kenpo System.

Notable members of the American martial arts community of the early 1970’s make appearances in the film. Bill Wallace won 23 consecutive professional fights between 1974 and 1980, becoming the Professional Karate Association middleweight, World full-contact karate champion and retired undefeated. He was known as “Superfoot” for his fast left leg kicks, especially his roundhouse and hook kicks, which clocked up a speed of about 60mph. Wallace was one of Elvis Presley’s martial arts instructors. He has appeared opposite Chuck Norris in “A Force of One” and Jackie Chan in “The Protector”.

Presley’s bodyguard (Red West) was a former Golden Gloves champion. He worked as an actor and stuntman in many of Elvis’s films, and appeared in the action film “Road House” with Patrick Swayze as Red Webster, the auto parts store owner.

Dave Hebler was one of Ed Parker’s original senior martial artists in the 1960’s. He was also a member of the “Memphis Mafia”, Elvis Presley’s close personal team of bodyguards and companions.

Kang Rhee is a Memphis Karate and Taekwondo instructor who taught Bill Wallace and awarded Elvis his 7th Degree Black Belt in 1973. Elvis was an instructor in the Pasaryu Karate Association established by Master Kang Rhee.

Some of Elviss demonstrations look vicious and deadly

In 1973, George Waite had an idea to make a documentary film presenting martial artists as modern-day gladiators. He shared his proposal with Ed Parker, who passed it on to his Karate student, Elvis Presley. The plan was to have Elvis playing the main role, introducing Karate arts divided into narration and demonstrations. Parker presented the idea to Presley, who liked it. A production meeting was scheduled at Elvis’s Graceland home, but no major details were arranged as Presley had to travel to Las Vegas for a performance. The next morning Presley sent his private plane to fly Waite and his wife to Vegas to complete the meeting. During the show, Presley gave Waite a cheque for $50,000 to begin production of the film.

Some footage was filmed of Elvis demonstrating various techniques and also of the U.S. Karate Team in Europe. Elvis eventually lost interest in the production, and the project was never completed.

After Presley’s death in August 1977, the footage was stored in a garage in West Hollywood inside the bed of a truck, and not discovered until 2001. The film of the U.S. Karate Team’s tour of Europe was restored and released in August 2002 as “The New Gladiators”. On 16th August 2009, Elvis Presley Enterprises released “Elvis Presley Gladiators” with the footage of Presley in Karate training sessions. 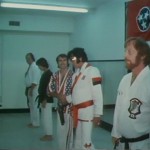 Lining in up with Bill Wallace Dave Hebler and Red West

Elvis wasnt at his peak during filming

A brief voiceover introduces us to the circumstances of how this film came into being. It is explained that the quality of the film and in particular the sound are not the best due to the way it was filmed. Elvis Presley arrives at the Tennessee Karate Institute wearing his famous “TCB” (Taking Care of Business) sunglasses and a custom Karate Gi with “E.P.” embroidered on the back. Having been introduced to everyone, Elvis partakes in promoting Bill “Superfoot” Wallace from 3rd Degree to 4th Degree Black Belt.

After the formalities, Elvis lines up the youthful Wallace and demonstrates some kicks to Superfoot’s groin, whilst still wearing his white leather cowboy boots! Afterwards, Elvis holds one of Wallace’s World Championship trophies with him and commends him on his fighting record. Wallace limbers up demonstrating his impressive flexibility, which Elvis compliments him on. The 6-foot tall Presley holds his hand high above his head for Wallace to swing his leg up and strike with apparent ease. Wallace chambers his left knee and slowly extends his leg to hold a high sidekick above Red West’s head, followed by some more rapid kicks which stop just inches from West’s face. It is easy to see from Wallace’s control, accuracy and active-range flexibility why he earned the nickname “Superfoot”.

Wallace next demonstrates some basic counter-attacks and takedowns, followed by Red West and Dave Hebler performing various self defence techniques, with Elvis looking on and describing the action.

Then the main man himself steps up. Red West performs some fairly solid reverse punches to Presley’s abdomen. This is followed by Elvis negating a throat hold by simply forcing West back using nothing but his neck. It’s quite astonishing to see one of the world’s biggest singers of the day happily demonstrating these techniques himself. Elvis, who was a qualified instructor, then explains and performs some self defence techniques of his own. Some are simple block and counter strikes, with chops to the throat, or pokes to the eyes. He performs a bizarre simultaneous nose-break and eye-gouge with one hand and lots of groin strikes (which Master Ken would approve of!).

In an amusing sequence, Red points a pistol at Elvis from a couple of metres away. Elvis explains that he will show you how to deal with this situation, and promptly falls to his knees and starts praying, much to the amusement of those present! When the laughter has died down, Elvis performs various, and at times vicious-looking, defences against a close-range armed assailant.

Korean martial artist Kang Rhee is next to demonstrate, with the “17 Lethal Moves”. Starting with basic strikes and backfists, he progresses to some impressive kicks and jumping techniques, which Elvis apparently loved watching him perform. The film changes location to Kang Rhee’s school and we see Elvis’s self-deprecating humour again as he reveals an injury to the back of his hand and an in-growing toenail!

During Elvis’s visit to Kang Rhee’s school, a young Yellow Belt demonstrates his kata in order to be promoted to his Green Belt. Elvis adjudged him to have passed satisfactorily. How incredible it must have been for a kid in the 70’s to receive his belt from Elvis Presley!

This is a fascinating and unique insight into one of the twentieth century’s most recognisable icons. Playing more like someone’s home video of a karate class in the early seventies than a proper documentary film, the picture and sound quality are understandably not the best. In a way it makes the footage that more intimate as we get to see glimpses of the “real” Elvis Presley, away from the theatrics of his musical performances. This isn’t Elvis at his peak however, as he sweats profusely and sometimes slurs his speech.

Defence against a gun at distance…

Defence against a gun at distance…. Prayer

Bill Wallace gives an impressive demonstration of his kicking techniques

A few of the techniques are antiquated by todays standards

Elvis is obviously very enthusiastic about the martial arts and respectful of those skilled in them. His own demonstrations range from the comic to the deadly. It makes you wonder how Elvis would have handled himself if he needed to. The footage of Bill Wallace as a young man is impressive, captured at a time when he was on the cusp of pioneering the sport of full contact continuous kickboxing.

The film also serves as a historical document of the “old school” methods of Kenpo. Some techniques look very antiquated, and Elvis is occasionally guilty of being melodramatic in his performance of them. It is an interesting snapshot of how martial arts was practiced just as the “kung fu craze” of the seventies was beginning to take hold.

It’s a shame this film wasn’t completed as originally intended. Even so, I am glad the footage was eventually discovered and released. For hardcore Elvis Presley fans and memorabilia collectors, if you can find a copy of this now rare DVD, it would make a distinctive and interesting addition to your collections.

Presley was impressed by Wallaces flexibility