The term “cult classic” is almost tailor-made for 1985’s “The Last Dragon”, the tale of a young martial arts warrior protecting the streets of Harlem with his righteous fists of fury, earning himself the nickname of “Bruce Leroy” in the process, embodied by then-newcomer Taimak.

A fresh face on the big screen, Taimak exuded the charisma of an up-and-coming action star with the Zen-derived wisdom of his character’s namesake. Over thirty years later, “The Last Dragon” remains as much a gem of 80’s martial arts nostalgia as “The Karate Kid”!

Today, Taimak sits down with KFK for a trip down memory lane from his beginnings in the film industry with “The Last Dragon”, along with his more recent projects, including the stage production of another cult-classic, “Road House”, and his role in the recently released martial arts spoof comedy, “Fury of the Fist and the Golden Fleece”!

Well, let’s kick off with you how you first got started in martial arts; what different disciplines have you studied and who are some of your biggest influences in martial arts?

I started when I was six, I did everything from karate to jiu-jitsu to Shaolin to Chinese goju, and I won my first kickboxing title when I was eighteen. As far as my biggest influences in martial arts, Bruce Lee was definitely the biggest one. Sonny Chiba was also another big influence for me.

Big ones there. So, what can you share about landing your most famous role, Bruce Leroy in the cult classic “The Last Dragon”?

I’d first heard about “The Last Dragon” through doing competitions. At the time, it was the first time in a while that somebody was doing a martial arts film with a person of color as the lead character. When I went in to audition the first time, I actually did pretty bad, and I went home broken-hearted, but I decided to try again about a month later. This time, even though they had somebody else in mind for the part, I really managed to impress them, and they went ahead and hired me for the role of Leroy Green.

Persistence wins the day eh! A little later on, you also appeared in the role of Dalton in the stage production version of the cult classic “Road House”? How was the experience of participating in the play and portraying Dalton? What are some of the differences doing martial arts in live theater as opposed to on a movie?

Well, we started “Road House” in a theater on the Lower East side of Manhattan, and it really caught on, people loved it, and we started performing the show in bigger theaters in the city. The director was a really zany character, and the play was hilarious. When it comes to doing martial arts in a stage production as opposed to a movie, the biggest difference is that you don’t get to stop and do a scene over, so if you make a mistake, it’s there for everyone to see.

Taimak is renown for his performance in The Last Dragon

I feel like people don’t really understand acting until they’ve done live theater; it’s where you learn how to really rehearse everything and adapt when something doesn’t go as planned. It’s kind of like the difference between having a college education and then gaining real-world experience in your field. You also get an immediate reaction from the audience, whereas with a movie, you have to wait a bit longer to see the response.

All worth it to bring Dalton to the stage, for sure. Looking ahead, you also recently appeared in the martial arts spoof film “Fury of the Fist and the Golden Fleece”, which also stars Bianca Van Damme, Bill Goldberg, Michael Dudikoff, Ernie Reyes Jr., “Judo” Gene Lebell, Don “The Dragon” Wilson, Danny Trejo, R. Marcos Taylor, and many others. What interesting stories can you share about making the film with its ensemble cast?

I actually got injured while we were making “Fury of the Fist”. I tore some muscles in my leg and my hip, which was just about the worst injury I’ve ever had, and ended up having to work around that while doing my fight scenes with Bill Goldberg and Simon Rhee in a lot of pain. Fortunately, I’m fully recovered now, and I didn’t have to get a hip replacement! Even though I was working on a pretty serious injury, it was fun working with Bill, he’s a nice guy and a real professional. We had a good time making it, and it’s probably the craziest movie I’ve ever seen!

Glad to hear you’ve bounced back! Looking ahead to training now, what does a typical workout session look like for you today?

Indeed, the internal work is commensurate with outer effects. On that note, what are some of your personal favourite martial arts or action movies?

Oh, there’s way too many! I really love anything with Bruce Lee, Sonny Chiba, Stephen Chow and also the “Shogun Assassin” series.

Excellent choices! So, if you could be a superhero, who would it be?

I think I’d want to be Batman.

Why not! So, what other projects have you got going in the pipeline?

I’ve written a few screenplays. One is a martial arts epic that takes place in Mongolia, and one is a superhero movie about a character who has super-speed and healing powers after he drinks an electro-chemistry drink. I also have a television pilot in the works, and we’re hoping to have that all ready by about October.

Taimak goes home with the gold

Class is in session with Taimak

Do keep us in the loop, look forward to seeing those! Well, as we sign off, Taimak, what special message would you like to share with Kung Fu Kingdom readers and your fans around the world right now?

I just want to thank my fans for all their love and appreciation including how enamored they’ve been with “The Last Dragon” since it was first released. I’d also want to share with people that if you’re really passionate and enthusiastic about what you’re doing, that’s the way to live a really inspiring and fulfilling life.

Nice to leave on a high note. Thank you so much for sharing some nostalgic nuggets it’s been such a pleasure Taimak. Keep in touch and we look forward to seeing all the exciting stuff you’ve got coming up!

Thanks Brad, my pleasure to chat with Kung Fu Kingdom today!

Taimak stops in for the Tribeca Film Festival 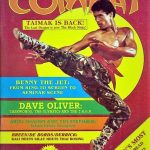 Taimak makes the cover in Inside Karate

“Fury of the Fist and the Golden Fleece” is currently available through Video On Demand platforms, already seen it? What do you remember most about Taimak’s cult hit “The Last Dragon” and what other types of films do you think would suit him? Let us know in the comments below; Like, share and join in the conversation on Facebook and follow us on Twitter & Instagram. (Unleash YOUR dragon within by exploring KFK’s FUniverse of other interviews too!)