Martial Art of the Month: Aikido

Martial art of the month is back and this month we take a look at the Japanese martial art of Aikido which is often misunderstood, soft yet powerful, gentle yet leveraging a huge amount of anatomical torque. Read on to find out how Aikido has grown into one of Japan’s most formidable martial arts systems that embodies the philosophy of the late Bruce Lee, “the art of fighting without fighting.”

Aikido is often mistaken as the ancient art of the samurai, yet it is barely a hundred years old. Founded by Morihei Ueshiba (1883 – 1969) it is derived from the art of Daito Ryu Aiki-jujutsu. Ueshiba (also called “O’ Sensei” meaning “Great Teacher”) was a former soldier and businessman who developed Aikido after years of studying Daito Ryu, also incorporating Judo techniques and Goto ha Yagyu Shingan Ryu (a traditional school that taught battlefield skills) learned whilst serving in the army during the Japanese – Russo war.

Aikido can leverage some major torque

As a protégé of Takeda Sokaku in 1915, Ueshiba travelled across Japan teaching the Daito principles. It was his encounter with the Omoto-kyu sect (a school of Shintoism which emphasizes enlightenment and compassion towards even the violent) that brought about a major change to Ueshiba’s views on martial arts.

Ueshiba wanted this new system to be a synthesis of martial arts ability with his new-found philosophy of peace and harmony. He believed that a skilled practitioner could learn to subdue an adversary by redirecting the attack leaving the attacker relatively unharmed. After World War II Ueshiba travelled further spreading his teaching of compassionate defence. By 1951, Aiki-Budo spread to Europe where its popularity continued to grow, before reaching the US in the 1960’s. Following his death Ueshiba’s students, which included Morihiro Saito and Koichi Tohei, spread Aikido across the world, and his legacy today is preserved and promoted by the Aikikai Foundation headed by Ueshiba’s grandson, Doshu (hereditary head) Moriteru Ueshiba.

This sensei shows a student how to perform Sankyo

This sensei demonstrates a knife disarm

Aikido is seen as having a dual purpose: to defend yourself without harming your attacker, and to develop ‘Ki’ (aka ‘Chi’), hence Aikido = way of harmony and unifying life energy. Some Aikidokas prefer to focus on one aspect over the other yet the techniques used equally serve both.

Aikido’s main principle is redirecting an oncoming attack using a combination of blending and turning from one’s centre. The attack is absorbed rather than met with force. Techniques are applied in one of two ways: with ura the person responds to an attack blending with the attacker using entering (irime) or turning (tenkan) manoeuvres, breathing in as they turn and then out. For omote, one doesn’t respond but initiates meeting a potential attack head on distracting the attacker with a quick wave of the hands or even a strike (atemi), breathing out as they step forward and then breathing in for the finish. This turning and blending with proper breathing is the foundation of all Aikido techniques.

Being a defensive art, Aikido attacks are simulated only as part of practice using grabs (wrist, arm, lapels, shoulder), strikes, punches and kicks. In dealing with the attack, the defender can use a throw (nage) usually Kokyu Nage (breath throw), Koshi Nage (hip throw) or even Shiho Nage (four directional throw) to redirect the oncoming attack.

Those familiar with Jujutsu and Aikijujutsuin particular will recognise many of the joint locks in Aikido such as a simple wrist turn or, Kotegaeshi. A skilled Aikidoka can easily subdue an attacker with any one of a series of joint locks leading to submissions. These have names like ikkyo, nikkyo, sankyo, which sound technical in Japanese but really refer to the number of joints the defender controls e.g. ikkyo (one joint: elbow), nikkyo (two joints: wrist and elbow) sankyo (three joints: wrist, elbow and shoulder).

Aikidokas practicing with the Jo staff

Sitting techniques might seem a little odd (and pointless) however they are vital in perfecting Aikido techniques and manoeuvrability. Attacking and defending from sitting, using knee walking (shiko) helps develop flexibility in the hips for turning. It also re-emphasises the importance of correct distance, movement and technique. From standing, physical traits such as height or weight can be an advantage. From sitting these advantages are levelled out ensuring the only possible way an attack can be redirected (regardless of physical build) is through the correct positioning, turning and breathing momentum.

Use of weapons play an important part in Aikido development. The weapons used are the bokken (wooden sword), jo staff (thought to be based on the spear or yari) and the tanto (knife). Weapons practice usually involve disarming an armed attack but using the same open-handed techniques, as well as blending and turning principles. Weapons practice develops proper distance and timing.

Practitioners you may know

The most instantly recognisable face of Aikido is Steven Seagal. His films including “Nico / Above The Law” and the box office smash “Under Siege” not only introduced a gritty realistic form of close quarters fighting  now a staple of the “Bourne” and “Taken” films but also showcased his powerful yet graceful Aikido techniques. Whatever you might think of his eccentric personality there’s no denying that 7th Dan Seagal Sensei’s Aikido is impressive to watch both on film and at his demonstrations at expos and seminars.

Earlier this year the world of Aikido lost a truly prolific figure, Stanley Pranin who passed away on March 7th, 2017. Through his books and numerous articles in the renowned publication Aikido Journal which he established in 1977, 5th Dan-ranked Pranin, a student of Morihiro Saito Sensei, was more than a teacher but a true historian of both Aikido and Daito Ryu Aiki-jujutsu.

Pranin spent his years meeting, training with, and interviewing revered Aikido sense is (all former students of Ueshiba) as well as gathering rare historical images, films, writings and publishing them in what is now known as Aikido Journal. This site (formerly made up of two printed publications) hosts the biggest collection of articles and archive material charting the history and growth of Aikido.

This student gets to grips with Shiho Nage 4 directional throw 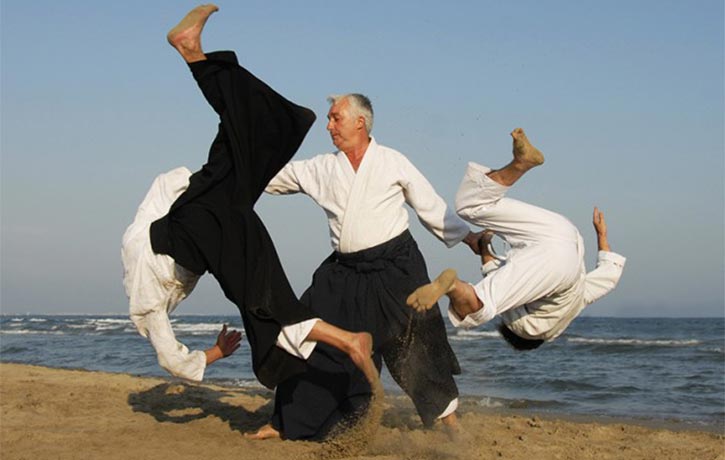 Aikido defense two on one

A direct disciple of Sensei Haruo Matsuoka for over 25 years, Josh Gold is the assistant chief instructor (ranked 4th Dan) of Ikazuchi dojo in Irivine, California, founded in 2002 with his master. As well as managing dojo operations, Josh leads the development of Ikazuchi’s training, research and development programs. One of the programs recently reviewed Aikido’s knife disarm techniques with help from renowned Hollywood stuntman (fight co-ordinator and lifelong practitioner of Kali/Escrima and Jeet Kune Do under Guro Dan Inosanto) Jeff Imada.

Josh was recently appointed Executive Editor of Aikido Journal being given the duty of continuing Pranin Sensei’s archive work.

Practice Aikido or got something to share about the art? Let us know about it below, join in the conversation on Facebook and follow us on Twitter! (Feel free to check out our previous Martial Art focus articles.)