Following the success of “Drunken Master” and “Snake in the Eagle’s Shadow”, Jackie Chan not only landed another lead role, but also made his directorial debut in “The Fearless Hyena”. Fans had previously complained about the English-dubbing as well as the plot due to its simplicity and similarity to that of “Drunken Master”, but does “The Fearless Hyena” warrant any praiseworthy attention? Let’s take a closer look!

Jackie Chan stars in the lead role as Sing Lung, a skilled but brash and undisciplined kung fu fighter addicted to gambling. James Tien is Sing Lung’s strict grandfather Chen Feng-Pei while Dean Shek portrays the owner of a coffin shop. Lee Kwan plays the money-oriented, incompetent “sifu” Tee Cha, who employs Lung as an instructor as well as a fighter. Chan Wai-lau plays Unicorn (also referred to as the Eight-Legged Kylin) and last but not least, Yam Sai-koon portrays the antagonist Yen Chuen-wong.

Sing Lung is a skilled but undisciplined kung fu fighter who can’t keep a job and spends his time fighting, slacking off on training and even gambling, much against the wishes of his strict grandfather, Chen Feng-Pei, who is a member of the Xinyi Clan.

After losing his job as a coffin seller, Lung is approached by three people, whose rather all-talk-and-no-action “sifu” and leader of the Everything Clan, Tee Cha, offers to pay Lung to teach at his school as well as fight members from other schools. As Lung dominates other fighters with his kung fu style, the Everything Clan is renamed the Sin Yee Clan and catches the attention of corrupt government official and former enemy of Chen Feng-Pei, Yen Chuen-wong. Yen eventually finds and kills Chen Feng-Pei. Lung, now stricken with grief over his grandfather’s death, trains with an old friend of Chen known as the Unicorn in a unique emotion-oriented fighting style in order to get revenge.

An intense fight and tash to boot

A violin lesson for the outmatched swordsman

As a director, Jackie Chan brings much creativity to the fight scenes in “The Fearless Hyena”. Besides the fast-paced and surprisingly intense kung fu brawls, this boasts some solid, humorous and clever fights worth remembering.

Some noteworthy combat sequences include a pair of fights where Chan is disguised as a mentally retarded man. In the first fight, Jackie tries serving his opponent tea, but it immediately escalates into a fight where we see Jackie comically toying with and taunting his opponent while making inventive use of the stool. Whether he’s sitting on it while fighting or even using it as a weapon, Jackie always finds ways to use the stool to his advantage.

Getting the boss involved in the fight

The next fight showcases a skilled swordsman. Although Jackie is initially unarmed, he manipulates the situation in a way where he gets his boss involved, such that the blade is pointed to the boss one way or another, just for Jackie to demand better pay! At one point, the scared boss couldn’t even enjoy his banana, which gets sliced by the sword.

Once Jackie arms himself with a staff, more high-speed action and creativity pursues as he moves his weapon around his opponent as well as between his own legs with ease. He also disarms his opponent’s sword and when the opponent tries to get it back, Jackie comedically scares the life out of him by pretending to play the violin with the sword, with the blade placed right next to his opponent’s neck. In a fight after that, we see Jackie in drag catching a huge fighter off guard, and it works hilariously, as the fighter makes humorous, suggestive advances while “sparring”.

Lung and Yen go at it for round 2 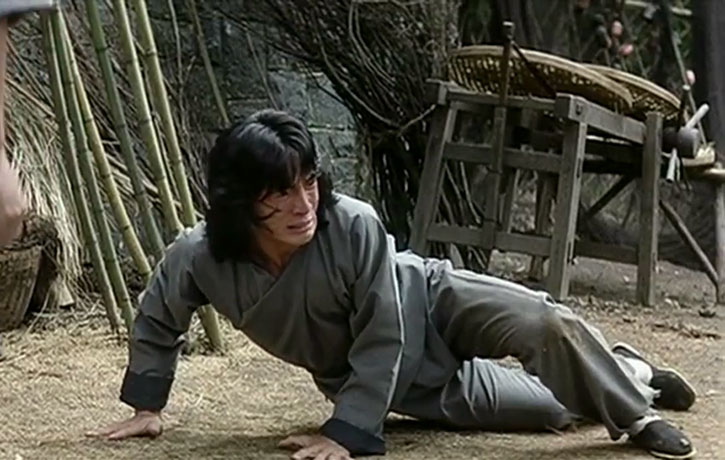 Lung grieves over his grandpas death

Yam Sai-koon also deserves recognition for his convincing portrayal as the villain Yen, who uses a style that emphasizes strong finger techniques making him worthy of the nickname “the touch of death.” This is a staple of Yen and makes him quite the formidable fighter capable of giving any of his opponents a run for their money. Such prowess is prevalent in the beginning fight as well as the fight between Yen and Chen Feng-Pei.

The training scenes with Unicorn are remarkable. The first bit of action we see under Unicorn’s training is the chopstick duel, in which Lung tries snatching a piece of meat from him with chopsticks in an artistic, thoroughly kung-fu-like manner. After that, Unicorn jabs at Lung’s legs with his cane as Lung tries to evade and get out of the room. Here, Jackie, for the most part, could only use bowls/porcelain as steps, but his talents really kick in here, for he demonstrates great leg control along with balance.

The many faces of Sing Lung

The way of anger

The best elements of the training are saved for last when we observe Lung practicing forms which clearly represent the emotions of joy, anger, melancholy, and happiness and therefore faithful to the emotional kung fu style that the Unicorn teaches.

We finally get to see the effectiveness of Unicorn’s rigorous training in the final fight against Yen. Jackie is at the top of his game here, for he manages to use Unicorn’s teachings to laugh, cry and get pretty hysterical (laughing indeed like a hyena!) through the pain inflicted by Yen, adjusting his technique accordingly with the aim of making Yen’s “touch of death” more into a baby’s touch.

To block and counter

Yen gives grandpa a run for his money

You missed by a mile

Even if youve hurt me Im still laughing

Lung up for a rematch against Yen

You can say what you want about “The Fearless Hyena” in terms of the not-so-new storyline or the poor English-dubbing, but you really can’t criticize the action, for it still nevertheless features some amazing, standout, fight action scenes with Jackie Chan in the physical prime of his life. Fans should appreciate the energy, effort and creativity to make the action style and moves somewhat unusual and distinctive here.

The way of joy

Way of the Stool