A Taiwanese release from 1979 featuring a cast of Shaw Brothers regulars, this film was also known as “Challenge of the Shaolin Disciples” in some territories.

When many of the local people are killed or injured in a mining accident, tyrant Master Chien (Danny Lee) decides he will not pay out any money to the survivors of the victims. The townsfolk try to persuade Master Chien to change his decision, but Master Chien refuses. The townspeople turn to the Iron Fist King, Chuang Yen (Chao Hsiung), to pay Master Chien a visit and get him to change his mind. Chuang Yen lives in the countryside operating a small clinic to help the poor. Aiding him are his daughter and two servants, who also study martial arts with him. After the Iron Fist King shows up at Master Chien’s and defeats his top fighter, Chi Hung (Tsai Hung), Master Chien decides to comply with the townspeople’s wishes, but little do they know that Master Chien has a backup plan that will cause everybody to suffer. Fearing a threat to his rule, Master Chien hires a renowned champion fighter, Hung Ying, to eliminate Chuang Yen.

Training isnt always for everyone

There are some nice kung fu forms

There are a couple comical moments

Kung fu films of the 1960’s and early to mid-seventies, were dominated by a style of fight choreography that many aficionados call “throwing shapes”. “King of Fists and Dollars” heavily features this style of action, with it’s staccato rhythm and traditional longfist techniques.

The first full-on fight features a character called Chee Hong who takes on four staff-wielding guards with his bare-hands. There is some very slight wire-assistance to enhance his apparent superhuman strength. He goes on to easily defeat Master Chien’s head guard in a demonstration of his skills.

Master Chuang Yen’s two loyal servants, one big and burly, and the other lithe and lean, take on bandits in a fight in the town. The lithe servant likes to use his tunic as a weapon to whip, strike and entangle his opponent. The burly mute lets his fists do the talking!

When Chuang Yen takes on Chee Hong, the choreography adopts a more “Chinese Opera” style, with the occasional cartwheel or handspring thrown in, along with a couple of wire-assisted leaps.

Ling Chang playing Chuang Yen’s daughter, “Yin Er”, makes a point throughout the film that she is just as able as the men at fighting, and has her own “two-on-one” fight to demonstrate her credentials.

The fights improve in speed and quality with the introduction of Michael Chan Wai-man’s fighter “Hung Ying”. The final quarter of an hour or so are taken up by a mass brawl between our heroes and Hung Ying and his cohorts. In classic old school fashion, each opponent hops around in the background awaiting their turn to be dispatched!

In addition to the standard fight scenes, there are the obligatory training scenes. There is nothing new here, with characters lifting great wooden buckets filled with water to make them strong, or doing press ups between logs. There are a couple of sequences featuring the stars practicing kung fu forms, and there is quite an extended sequence with Ling Chang demonstrating various kung fu techniques and styles, including what looks like a “tea-drinking” style!

The end of the film features a big brawl

The Burly Mute shows them how hard training is done

The Burly Mute flexes his muscles

Ling Chang is just as capable at fighting as the men

With the demise of labels such as Cine Asia and Hong Kong Legends, there is currently a bit of a gap in the market for classic kung fu films. It is admirable that Terracotta Distribution are trying to fill that gap with releases such as “Hero of Shaolin” and “The Shanghai Thirteen“.

With this release however, it is much more a “niche” choice in my opinion. The story is fairly standard, which also goes for the training sequences and the action choreography. On the disc I had, there was only the dubbed English soundtrack, and there were no other extras. The film is presented in a wide, letterbox format, with no noticeable cropping. The colour, brightness and contrast are good in the most part, bringing the sets and costumes to life.

Fans of the “shapes” type choreography will enjoy some of the sequences here, with some crisp, clean trapping and blocking kung fu techniques. For me personally, I prefer the more fluid choreography, epitomised by the films of Sammo Hung, Jackie Chan and Yuen Woo-ping, and there are little bursts of that style in Michael Chan Wai-man’s scenes.

Old school purists will probably enjoy this and might even welcome the “crackly” picture quality. For me, I hope that in the future, Terracotta can get the rights to some of the more crowd-pleasing titles, and give them the re-mastering and extras they deserve. Now if they could just get a hold of “Pedicab Driver”…… 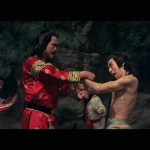 Fans of shapes will enjoy some of the crisp clear techniques

Classic dodge the knife and trap

Balance is the key

A tunic can be a powerful weapon

4 Guards armed with sticks are no problem for Chee Hong